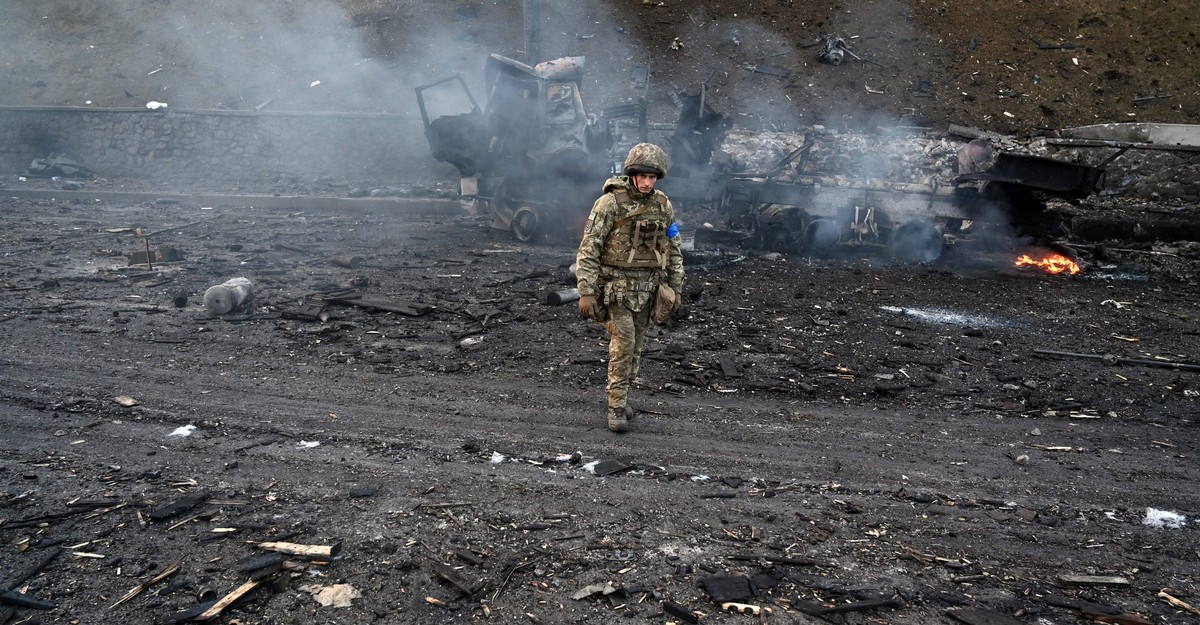 Vladimir Putin’s invasion of Ukraine has already led to a crisis—not only for Ukraine but also for the Kremlin. As Russian troops have advanced toward Kyiv, the European Union and the United States have responded with dramatic financial punishments that could deep-freeze the Russian economy and send inflation on an upward spiral.

There are now five ways that the aggression in Ukraine can end, according to Paul Poast, a professor of foreign policy and war at the University of Chicago. They are: a disastrous quagmire or retreat for Russia; violent regime change in Kyiv; the full conquest of Ukraine; the beginning of a new Russian empire; or a chaotic stumble into something like World War III.

In an interview for my podcast Plain English, Poast discussed these five scenarios in depth, the major factors that will shape the outcome of this crisis, the Biden administration’s response to Putin, why he feels this invasion is reminiscent of Japan’s attacks on Pearl Harbor, and the most important things to watch out for in the coming week. This is an edited and abbreviated transcript of our conversation.

Derek Thompson: Let’s start with the scenario that assumes the least amount of success for Russia, and then we’ll build toward the scenarios that assume more ambitious and potentially more disastrous plans for Russia in Europe. Scenario 1 is that Russia’s war quickly becomes a quagmire. There are already protests across the country. Russian celebrities have spoken out against the war. Russia’s stock market has tanked. Russia’s currency has cratered, and the pain might be just beginning if sanctions bite down on oligarchs and businesses. Tell me what you see as plausible and implausible about a scenario in which Russia reassesses this invasion and dramatically scales back its ambitions.

Paul Poast: This is indeed a scenario that a lot of analysts have been predicting, because of exactly what you said. Looking at the Iraq War, the U.S. experience with Afghanistan, and—let’s be honest, we could go further back—the Soviet experience with Afghanistan, these are all scenarios that we label a quagmire, a mess. There’s resistance. The military forces are bogged down. And indeed, for all the reasons you just laid out, this just looks like a bad idea in hindsight. Is this plausible, and what would Russia do if this were to happen? Yes, this is very much plausible. As you said, there’s already a lot of resistance. The Ukrainians are fighting for their country. They are probably more motivated. They have more morale than the Russian troops. These would all be contributors to making this very tough for Russia to accomplish.

Thompson: Scenario 3 you call “state death.” What is state death, and how does it represent a notch beyond regime change?

Poast: State death is a phrase that I borrowed from the work of Tanisha Fazal, a professor [who specializes in] international relations at the University of Minnesota. State death is when a state no longer exists because it is annexed or conquered, and it ceases to be independent. This would mean Russia’s objective is not just to put in a new government, like in Scenarios 1 and 2, but to actually take over the entire country and make Ukraine part of Russia. This is exactly what Russia did with Crimea.

Thompson: Based exclusively on Putin’s rhetoric so far, is he talking about this invasion as more about regime change or state death?

Thompson: That takes us to Scenario 4. This is what you call “imperial overreach.”

Poast: If you take seriously what Putin says in his speeches, with this desire to re-create the Russian empire, that shouldn’t end with Ukraine. There are other states, former Soviet republics like Moldova, Belarus, and Georgia—a country that Russia invaded in 2008. These countries are independent states that used to be part of either the Soviet Union or the Russian empire. So, this next scenario envisions that Putin’s objective is to only start with Ukraine. And once he successfully conquers Ukraine, the next step is to go further and bring these other former Soviet republics into Russia and to truly re-create the Russian empire.

The reason why this is called “imperial overreach” is because a common thing that happens with a lot of empire endeavors is you overextend yourself and create an ungovernable entity. That is the risk that this scenario poses, let alone the challenge of having enough military success to do the conquering itself.

Thompson: So in the short term, this scenario assumes extraordinary Russian success at conquering the country of Ukraine and essentially running the country as an extension of the Russian empire. But it also implies that this success encourages Putin to move east and south of  Ukraine into countries like Moldova and Georgia, and these further invasions create their own enormous headaches for an enlarged Russian empire. That leads us to the last scenario that you envision, which I hope is extremely unlikely. That is the major-power-war scenario.

Poast: In all the other scenarios, this is about Russia attacking the smaller states that used to be part of the Soviet Union but not part of NATO. The North Atlantic Treaty Organization is an alliance of many of the Western European countries, Eastern European countries, and the United States, and includes the Baltic nations of Estonia, Latvia, and Lithuania, which were very important to the Soviet sphere during the Cold War. This final scenario envisions that Russia, and specifically Putin, decides to go further from Ukraine into these NATO countries. He could do this for any number of reasons. He could want to rebuild the empire. He could be overconfident from success in Ukraine. Perhaps he feels like the resolve of the West is not very great. But if that happens, if he attacks a NATO country, it triggers Article 5, which is a mutual-defense clause stating that an attack on one is an attack on all. If that happens, then other NATO countries would come to the defense of that NATO country, and that ends in a war between the United States and Russia.

Thompson: What are you seeing on the ground so far that makes any of the scenarios most likely?

Poast: We’re still very early. But one thing that has jumped out at me right away is the number of casualties on the Russian side. If the numbers are accurate, there have already been several thousand fatalities, with similar levels on the Ukrainian side. To put that in perspective, in most wars we’ve studied, you see about 50 battlefield deaths a day. To have a war with well over a thousand fatalities tells you how intense the fighting is. This is an extremely intense war. That intensity, I think, is both a function of the speed and scale by which Russia has gone about carrying out their campaign. But it also points to the resistance, and there’s going to be growing resistance by Ukraine. It is absolutely devastating what we’re witnessing.

I’ll tell you how my expectations of this conflict have evolved. I’m very much on record for saying that I thought Putin would invade. But I thought this would be a limited invasion. I thought that he would take small slices of territory in eastern Ukraine. I had to update over the past week, as I heard his rhetoric, saw this large mobilization, and realized this was going to be a large invasion.

Given the size and scale of this invasion, coupled with the rhetoric, I really do think that his objective is some form of annexation, or full conquest of Ukraine. That is the scenario he is most seeking out now. When I combine that with an analysis of Russia’s operational ease, I think the most reasonable thing that we could be expecting right now is regime change in Kyiv.

Thompson: Tell me what you are looking for in the next week to determine the most likely outcome of this crisis.

Poast: Two things. First, how is the actual military campaign going? Does Russia seem like they’re achieving quick success? That will tell us whether full conquest is still likely. And second, watch Poland. I really do think that Poland could be the flashpoint. What does the refugee situation in Poland look like? What is Russia saying about the refugees? Are there any hints about whether Russia is planning any kind of move against Poland? Anything along those lines would bring us closer to the nightmare scenario of war against NATO.

Thompson: We set up a very linear decision tree—if Putin gets this far, it’s Scenario 2; if he gets that far, it’s Scenario 4—but is there any way the tree could get a little bit tangled? Where, for example, Putin fails and this war is seen as a huge embarrassment and as an economic disaster for Putin, but because of that failure and because of that embarrassment, it causes him to strike out in some other way that we’re not currently anticipating?

Poast: What makes this a very scary scenario—what makes a war between the great powers more likely than it’s been in 80 years—is that Putin might feel at some point like his back is against the wall and he has no other options, so he lashes out in desperation. In our discipline, we call this “gambling for resurrection.” You’re worried you are going to be deposed, and the only way to save yourself is to take a high-risk gamble. Otto von Bismarck in the 19th century called it “committing suicide for fear of death.”

There is a useful analogy with Pearl Harbor. In the late 1930s, Japan had invaded Manchuria and was engaged in a war with China. And the U.S., which was supporting China at the time, imposed an oil embargo on Japan. We squeezed the Japanese government until they realized they only had about a year and a half of resources left. They were desperate to stop the oil embargo. So, they took the gamble of Pearl Harbor and paid for it with a costly war in the Pacific. I think we have to consider a question: If we apply similar economic pressure to Russia, could Putin make a similar decision to what Japan did in 1941?

Thompson: This is a real dilemma, because the U.S. government doesn’t want to be in the position where we let Ukraine suffer and watch thousands of people die just because we’ve been spooked into thinking that angering Putin could cause another Pearl Harbor. That seems monstrous and inhumane, and yet I fully understand the calculus you’re describing. So, what should President Joe Biden do?

Poast: I think the Biden administration is making the right decision. I think that they need to do more to mobilize forces into Poland, into the Baltic states, to put in place what we would call a trip-wire force to discourage Putin from further invasions. But we’re facing all-bad options. The objective is to pick the least-bad option.