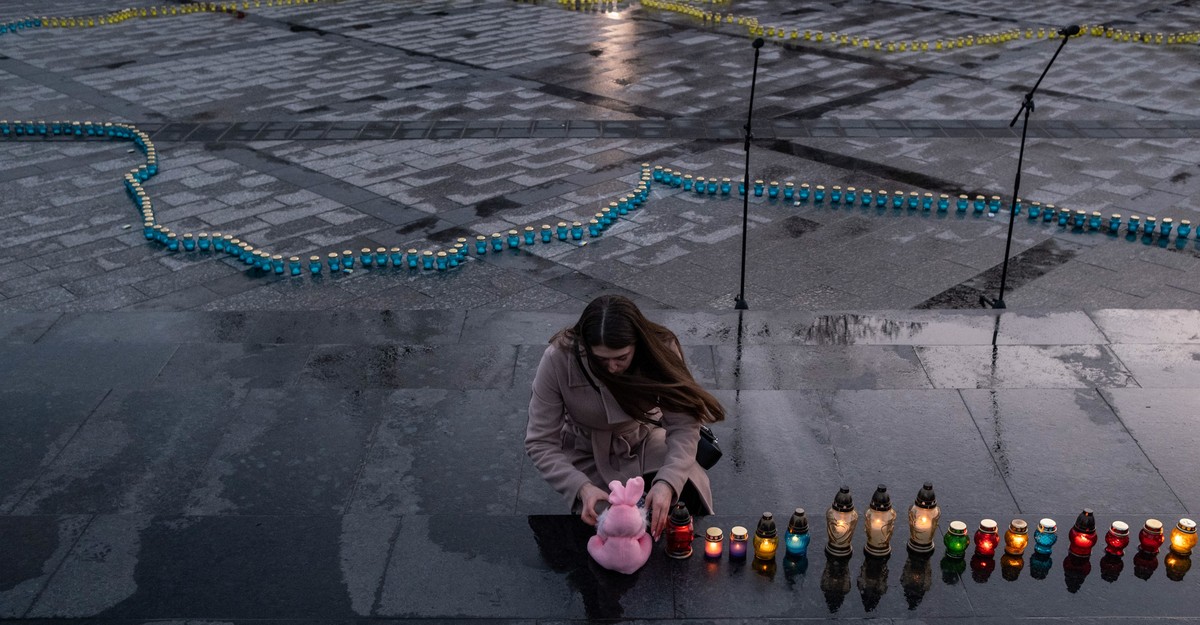 On March 13, a Russian soldier broke into a school in Malaya Rohan, a village near the Ukrainian city of Kharkiv, which had been relentlessly attacked by Vladimir Putin’s forces for weeks. Locals had congregated in the school’s basement for shelter from the violence. What followed, according to an account from a survivor published by Human Rights Watch, is horrifying but bears detailing.

The soldier ordered a 31-year-old woman to another floor of the building and proceeded to rape her repeatedly. He made her perform oral sex, and while she did, he held a gun at her head, or pointed it directly at her face. Twice, he shot at the ceiling. “He said it was to give me more ‘motivation,’” she told HRW.

When the seemingly endless attack was finally over, the soldier told the woman his name, his age, and declared himself Russian. Perversely, he also brazenly said that she “reminded him of a girl he went to school with.”

The report is among several that have trickled out of Ukraine in the weeks since Russia invaded, incidents of sexualized violence documented by NGOs such as Human Rights Watch, Amnesty International, and various organizations within Ukraine. The reality is that these reports are likely only scratching the surface. Over the decade I’ve spent reporting on sexualized violence in conflict globally, multiple experts have told me that for every woman known to have been raped, there are probably eight to 10 more who haven’t been counted, and that even compiling any sense of the extent of sexual assault in such circumstances can take years.

That is what makes the Malaya Rohan story and others like it in Ukraine unusual. We are hearing about these violent acts nearly in real time. We have remarkable detail—sometimes even the name, age, and nationality of the perpetrator. This is unquestionably distressing, yet it also provides a measure of hope: hope that we can get survivors of rape and sexual assault in Ukraine medical and psychological help quickly; hope that we can record their stories so that they may be used in court; hope that, ultimately, however unlikely the possibility may seem now, justice will be served.

Sexualized violence has been used as a tool in conflict for centuries around the world, whether in Sierra Leone, Bangladesh, Colombia, or elsewhere. Sometimes the use of rape is genocidal, as it was in Rwanda, where ethnic Hutus wanted to impregnate Tutsi women to break their bloodlines, or to pass along HIV. At other times, rape is a crime of opportunity, or a means of declaring one side the “winner” of a war: Estimates vary, but according to historians, both Soviet and American soldiers raped massive numbers of German women as World War II ended.

Whether women (and men too) speak out about sexualized violence in any context depends on a number of factors, including culture and religion, the existence of an infrastructure of documentation and investigation, and the extent of medical and psychosocial support for survivors. Even in places with a robust legal system, such as the United States or Western Europe, far too many survivors find no justice, or are afraid to come forward in the first place.

Reporting rape and assault in a live war zone is, predictably, more complex—systems of justice may have broken down, weapons are plentiful, and giving evidence may be impossible in such an insecure environment. As a result, rape in war has been mainly documented after the fact, making both evidence gathering and therefore prosecutions that much harder to carry out.

Consider how experts arrived at the estimate of 250,000 to 500,000 women raped during Rwanda’s genocide. In 1996, two years after the bloodletting, the United Nations Special Rapporteur on Rwanda tabulated the number of officially documented cases and then, because of the widespread understanding that rape even in peacetime is significantly underreported, extrapolated to his final estimate based on his assessment of the prevalence of sexual assault.

Various studies have put the count of women sexually assaulted in the so-called rape camps during the Bosnian War of the early 1990s at somewhere between 20,000 and 60,000. Yet most sources have said that truly accurate numbers will probably never be established, as in the majority of conflicts.

Survivors typically have little incentive to pursue justice—if anything, they face an array of obstacles instead. The Syrian civil war offers a case in point. Researchers and journalists such as myself worked hard to unearth reports of rape carried out by Syrian dictator Bashar al-Assad’s fighters; survivors feared retribution from not only government forces, but also their own male family members. I’ve met Syrian women divorced by their husbands or beaten for having been the victim of sexual assault, and spoken with many Syrian refugees who say that they know men who have killed their wives for having been raped. Their experience is not unique. I’ve talked with young girls in the Democratic Republic of Congo, the site of numerous ongoing conflicts, who left their villages to find help after being raped and, upon their return home, were shunned by their own community.

Sexualized violence “seems to be the one remaining form of violence in which the victim is blamed or even said to have invited it,” Gloria Steinem, the feminist journalist and activist, told me in 2012.

Even if a woman pushes forward to pursue a conviction, there is no guarantee she will see one. Though a special tribunal was set up to try war crimes in the former Yugoslavia, for example, I’ve spoken with women who say that they still see their rapists on the bus or the street, that the men have paid their way out of jail—if they were convicted at all. Though numbers on convictions for sexual assault during conflict are hard to come by, I can tell you from more than a decade of reporting on the issue that a perpetrator being found guilty in a court of law is a rare thing. Convictions of those higher up the chain who gave the orders for soldiers to rape are even less common.

Rape in war is both a war crime and a crime against humanity. Historically, though the definition of these crimes has been well understood, bringing such cases to court, let alone proving them, has been another matter. The war in Ukraine offers a chance to rectify these failures.

Thanks to advancements in technology—including more plentiful satellite imagery; smartphones capable of high-resolution photography and video; faster and more easily available internet services; and substantially improved communications platforms—health workers, lawyers, journalists, and human-rights groups can alert the world about what is being perpetrated in Ukraine, and document cases in ways that will help in eventual trials.

These new or more advanced technologies must complement traditional methods of documentation, including gathering information from defectors, taking proper medical evidence in a timely fashion, and obtaining details from the parties themselves about their own crimes, as was done with the Nazis in World War II and with the Bosnian Serb army. With rape in particular, there is often no physical evidence of soft-tissue damage to prove the crime in a courtroom setting. There may, however, be other telltale wounds, such as cigarette marks, scars from ligatures, wood splinters, abrasions, or genital mutilation, which must be clearly and professionally documented. Investigations must be carried out by officials who are “gender competent.” Are they able to effectively ask witnesses and medical professionals the right questions about sexualized violence? Can they gather the right physical evidence, testimonials, and direct as well as circumstantial evidence?

Crucially, all of this evidence gathering can begin immediately, both in areas where Russian forces have withdrawn, and in parts of Ukraine that are still contested but where communication has not been severed. The European Union, the UN, multiple human-rights groups, the secretary-general of NATO, and Ukraine’s prosecutor-general recently have either called for investigations of possible war crimes in Ukraine, including rape, or have offered their help in carrying out the investigations.

It may seem fanciful at this stage—with Russia still hammering Ukrainian territory, and no resolution to this war in sight—to plan for a period in which Russian soldiers might face trial for their abuses. Yet it is not at all out of the realm of possibility: Neither Russia nor Ukraine are subject to International Criminal Court prosecutions, but Ukraine has previously accepted the court’s jurisdiction. Another possibility is that countries that have begun prosecuting war crimes unrelated to their citizens, such as Germany, may begin proceedings on the basis of the concept of universal jurisdiction. This road is a long one, and there is no guarantee of success, but high-quality evidence-gathering in Ukraine now improves the odds considerably.

Though the majority of Ukrainian women may not be fighting on the front lines, they are sacrificing their lives every bit as much as Ukrainian men are. We owe it to them—and to all of humanity—to ensure that the men who violate women’s bodies are not allowed to do so with impunity. For once, we’re not hopeless to help women and investigate war crimes. We’re actually at a place to begin.

“It’s like in 1942: Where do you start investigating the Holocaust?” Patricia Viseur Sellers, the former legal adviser for gender at the tribunals for the former Yugoslavia and Rwanda, told me. “You start where you can.”