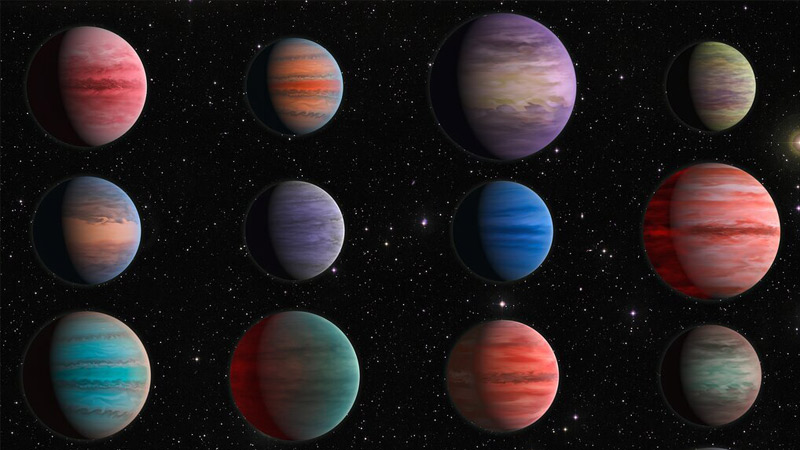 Archival observations of 25 hot Jupiters by the NASA/ESA Hubble Space Telescope have been analyzed by an international team of astronomers, enabling them to answer five open questions important to our understanding of exoplanet atmospheres.

Amongst other findings, the team found that the presence of metal oxides and hydrides in the hottest exoplanet atmospheres was clearly correlated with the atmospheres’ being thermally inverted.

Thus far, the majority of research into characterization has been directed towards modeling, or studies focusing on one or a few exoplanets. This new work, led by researchers based at University College London (UCL), used the largest amount of archival data ever examined in a single exoplanet atmosphere survey to analyze the atmospheres of 25 exoplanets.

The majority of the data came from observations taken with the NASA/ESA Hubble Space Telescope. The lead author, Quentin Changeat, explains: “Hubble enabled the in-depth characterization of 25 exoplanets, and the amount of information we learnt about their chemistry and formation—thanks to a decade of intense observing campaigns—is incredible.”

They chose to investigate a wide range of hot Jupiters, with the intention of identifying trends within their sample population that might provide insight into exoplanet atmospheres more generally.

In order to investigate their sample of 25 exoplanets, the team reanalysed an enormous amount of archival data, consisting of 600 hours of Hubble observations, which they complemented with more than 400 hours of observations from the Spitzer Space Telescope.

Their data contained eclipses for all 25 exoplanets, and transits for 17 of them.

The large-scale survey yielded results, with the team able to identify some clear trends and correlations between the exoplanets’ atmospheric constitutions and observed behavior.

Some of their key findings related to the presence or absence of thermal inversions [6] in the atmospheres of their exoplanet sample.

They found that almost all the exoplanets with a thermally inverted atmosphere were extremely hot, with temperatures over 2000 Kelvin.

Importantly, this is sufficiently hot that the metallic species TiO (titanium oxide), VO (vanadium oxide) and FeH (iron hydride) are stable in an atmosphere. Of the exoplanets displaying thermal inversions, almost all of them were found to have H–, TiO, VO or FeH in their atmospheres.

It is always challenging to draw inferences from such results, because correlation does not necessarily equal causation. However, the team were able to propose a compelling argument for why the presence of H–, TiO, VO or FeH might lead to a thermal inversion—namely that all these metallic species are very efficient absorbers of stellar light.

It might be that exoplanet atmospheres hot enough to sustain these species tend to be thermally inverted because they then absorb so much stellar light that their upper atmospheres heat up even more.

Conversely, the team also found that colder hot Jupiters (with temperatures less than 2000 Kelvin, and thus without H–, TiO, VO or FeH in their atmospheres) almost never had thermally inverted atmospheres.

A significant aspect of this research was that the team were able to use a large sample of exoplanets and an extremely large amount of data to determine trends, which can be used to predict behavior in other exoplanets.

This is extremely useful, because it provides insight into how planets may form, and also because it allows other astronomers to more effectively plan future observations.

Conversely, if a paper studies a single exoplanet in great detail, whilst that is valuable it is much harder to extrapolate trends from. An improved understanding of exoplanet populations could also bring us closer to solving open mysteries about our own Solar System.

As Changeat says: “Many issues such as the origins of the water on Earth, the formation of the Moon, and the different evolutionary histories of Earth and Mars, are still unsolved despite our ability to obtain in-situ measurements. Large exoplanet population studies, such as the one we present here, aim at understanding those general processes.”