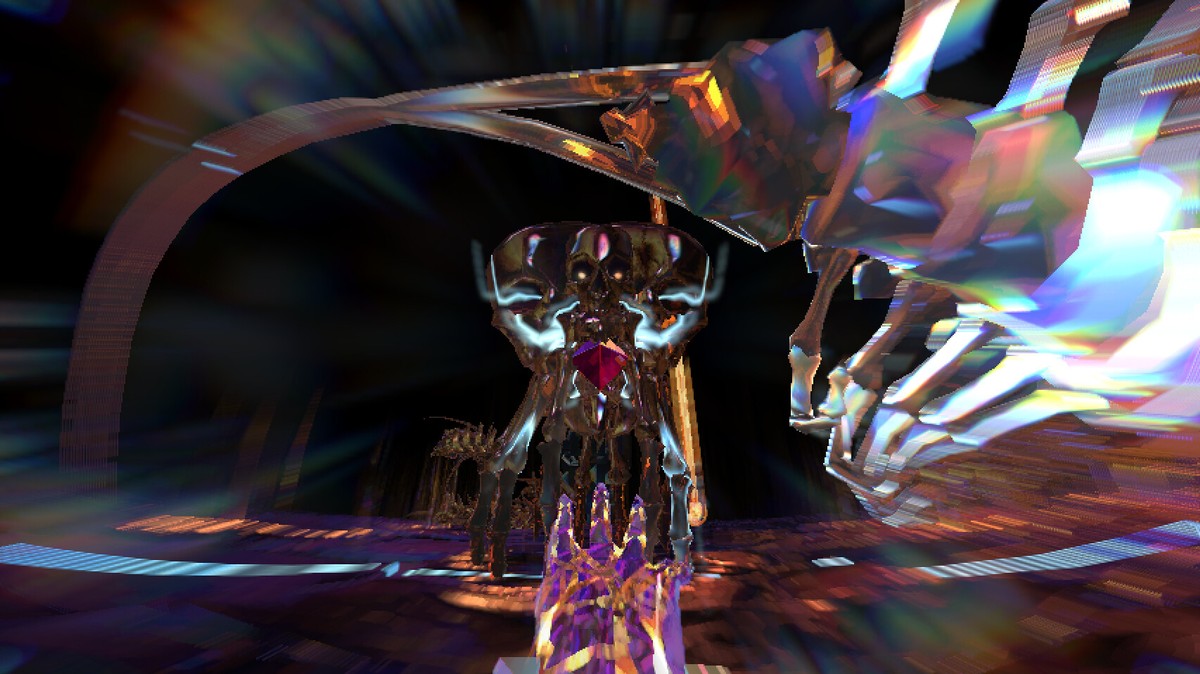 I have been frightened by plenty of video games before. I have looked, with dread, at my dwindling ammunition, knowing that the worst encounter I can imagine is waiting just around the corner. I have felt the crushing, wet, and dense atmosphere of a house that wants to eat me. Video games are good at manipulating your emotions and showing you things that frighten you. But in all my time playing games, I hadn’t ever been frightened of a video game. At least, not until HYPER DEMON, the surprise followup to the hit 2016 indie FPS, Devil Daggers.

Sorath released HYPER DEMON, which looks like no other game you’ve seen besides, perhaps, Devil Daggers, with no warning on Monday via a Twitter trailer and a link to the game’s Steam store page. I don’t know if there’s any other way they could’ve done it, because HYPER DEMON feels much too powerful to be contained, or even included within, a press release. It is a game that encourages vague description because it seems to defy any concrete language beyond a list of traits like “HYPER DEMON is an extremely overwhelming first person shooter, in which you shoot, bunnyhop, and slide your way across hell to get the highest score possible.” I will, however, do my best.

In HYPER DEMON, you are a being of unknown mass and impossible velocity. You have an opalescent hand of gold and chrome. You can see everything all of the time. Your vision is fisheye’d and warped, to present you with the maximum stimulus possible at every moment. The demons, who are chasing you, appear as red ghosts in your vision. When you snap around, with perfect precision, to kill them, they are bathed in chrome and blood. They shatter under your onslaught of daggers, and the crystals of their body are pulled to you. The crystals come to your wrist, and shrink (impossibly) and orbit (impossibly).

You kill more. You bunnyhop, airdash, and slide with more grace than you think yourself capable of. You draw on the crystals and release a thousand beams of blue light. The beams reflect off of the ground and into everything that moves. You hurl your body into the fray, colliding with stunned demons. They explode and the violence of their bodies throws you further forward and into the black. Three seconds have passed.

And then it happens again, and again and again. Those terrible three seconds happen until your body breaks and you get your score and you go again. You will always go again, because HYPER DEMON focuses and refracts your attention until it becomes the only thing that exists. Each run can last five second or five minutes. I will make dozens of attempts in the span of an hour. Making hundreds of decisions every minute. It is so, so much.

It makes me want it to be more, too. The game’s base field of view is 90 degrees. After a few games, I upped it to 120. After 50 more, I upped it again to 180 degrees of vision. You would think that this would become totally unreadable, that the game would blur into a mass of terrible light and color. Instead, with full 360 degree vision, everything becomes sharper. I move with more grace, I scrape closer to the ground and my digital body finds the smallest possible needles to thread. I want to know everything and be its hurtling empress.

It is unlike any game I have ever played, even its predecessor Devil Daggers isn’t…like this. Other score and time attack games don’t do this to me. They do not make me keep coming back over and over again. They do not make me wish I could open my eyes wider and wider until I can eat the world. I am terrified of it.