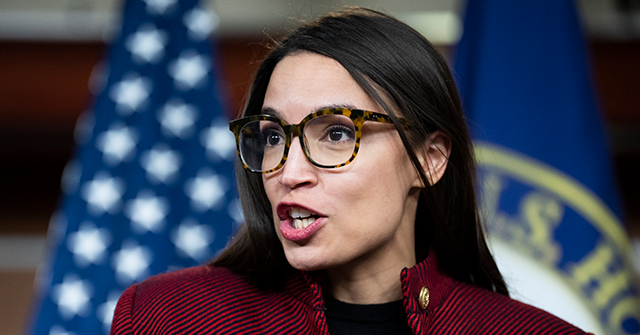 Democrat Rep. Alexandria Ocasio-Cortez (D-NY) suggested in a lengthy interview with GQ that she fears for her life and is uncertain about her future because “so many people in this country hate women” and “women of color,” specifically.

Ocasio-Cortez, who is featured in the latest edition of GQ, praised the magazine for taking “some big risks” and interviewing her so she could “tackle the issue of gender and politics.” She made it clear that was proud to have “two legendary trans icons … photographing and styling the images” in the feature shoot.

“Shout out to GQ for being willing to go there and discuss good men, what it looks like to step up and grow, and what healthy masculinity looks like in the modern age,” she wrote on Instagram, promoting the interview.

While she discussed issues such as abortion as well as gender in politics — she claimed “men suffer from being under patriarchy” — she also talked about her future and expressed great concern.

“Sometimes little girls will say, ‘Oh, I want you to be president,’ or things like that,” she said, explaining that it is “very difficult for me to talk about because it provokes a lot of inner conflict in that I never want to tell a little girl what she can’t do.”

“And I don’t want to tell young people what is not possible. I’ve never been in the business of doing that. But at the same time…” she continued.

According to GQ’s Wesley Lowery, the congresswoman’s speech “slowed to a crawl and, for the first time in the hours we had spent speaking, she broke eye contact, burying her gaze in the arm of her chair.”

“Tears pooled in the corners of her eyes,” he wrote.

“I hold two contradictory things [in mind] at the same time. One is just the relentless belief that anything is possible,” Ocasio-Cortez said before revealing that she is hesitant to talk about the future because she fears for her life, as so many Americans, she concluded, hate women and further, minority women.

But at the same time, my experience here has given me a front-row seat to how deeply and unconsciously, as well as consciously, so many people in this country hate women. And they hate women of color. People ask me questions about the future. And realistically, I can’t even tell you if I’m going to be alive in September. And that weighs very heavily on me. And it’s not just the right wing. Misogyny transcends political ideology: left, right, center. This grip of patriarchy affects all of us, not just women; men, as I mentioned before, but also, ideologically, there’s an extraordinary lack of self-awareness in so many places.

“And so those are two very conflicting things. I admit to sometimes believing that I live in a country that would never let that happen,” she added.

This is not the first time the Democrat has spoken out on these topics, asserting last year that “white supremacy and patriarchy are very linked” while discussing her apparent fear that she would be raped during the January 6 Capitol protest.

“You know white supremacy and patriarchy are very linked in a lot of ways,” she told CNN’s Dana Bash.

“There is a lot of sexualizing of that violence. I didn’t think that I was just going to be killed. I thought other things were going to happen to me as well,” she added.

Notably, Ocasio-Cortez was not even in the actual Capitol building at the time of the protest but in the Rayburn House Office Building across the road.

Months after making that remark, Ocasio-Cortez concluded that Republicans are simply mad they cannot date her:

If Republicans are mad they can’t date me they can just say that instead of projecting their sexual frustrations onto my boyfriend’s feet.