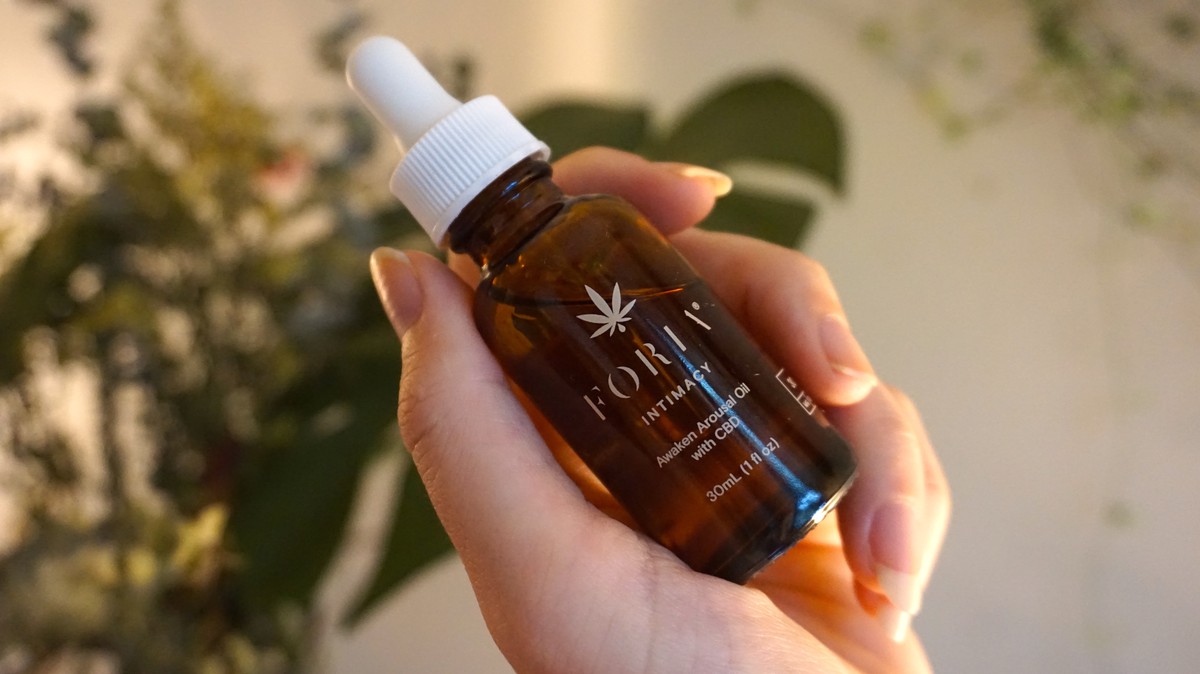 Lube is all around, if you’re willing to look for it. We “lube” our creaky joints and doors. We lube our mahogany furniture to stay shiny, our roots to stay healthy, and our gears to keep turning. We even reserve a sacred sploosh of pasta water to lube up our penne alla vodka. So why wouldn’t the same go for our nethers? And not just for folks experiencing vaginal dryness, but for any folks like me who want to ride a dick like a waterslide.

I’ve used coconut oil, Maude’s travel-sized lube (a vacation must), and Überlube, which boasts some 30,500 loyal Amazon reviews. I’ve been the Goldilocks of lube, but I had yet to try the CBD lube from Foria, which is kiiinda a big deal in the sexual wellness industry; If you Google “CBD lubes” or “sex oil,” Foria’s amber vial of Awaken Arousal Oil will reign supreme in countless articles.

Foria has been on my radar for a long time. I mean, look at it. It’s really sexy in an understated way, which is an aesthetic design point I’m always looking for in sexual wellness items.

I smoked a lot of weed in college. These days, like many of my fellow thirty-something taxpaying Deadhead friends, I’ve swapped it for the mellow, workable CBD tinctures that give me a wisp of that easy breezy Milky Way energy I loved about weed, without actually getting me high.

The same goes for use with a partner. “Would you like to support journalism?” I asked my confused but willing date, and reached for the little brown vial. We had been having sex for a while that night, and I was hoping Arousal Oil could help get both of us to the finish line. Once again, it came in clutch with a non-sticky texture and expensive aroma—think, adult Thin Mint Girl Scout Cookies—and a velvety sensation that felt like hangliding over a penis. I’m not saying it was a make-or-break moment for my orgasm—but, you know those obligatory scenes in superhero or Transformers movies where a hero’s car will rev itself up, and extend an unforeseen wingspan to take flight? That’s what happens to my clit, almost instantly.

The bottle’s dropper applicator is cool, because it made me feel like a penis alchemist. But the new pump version would definitely be more of a time-saver.

Are you new to lubrication and sex oils in general? Curious about CBD lubes? I can’t speak for your genitals, but Foria’s Arousal Oil sure checked all of my lube boxes; it’s vegan, organic, and has the kind of subtle botanical aroma that will only make you hornier during a spank sesh.

Orgasms are like snowflakes. Each climax comes with its own unique flourishes (or lack thereof) to help us remember (or not) that it not only happened, but how it happened. Each time I’ve used Arousal Oil, I’ve noticed more relaxed, heightened sensations from my clitoris—but not in a way that feels overpowering. It’s just like having a little extra oomph in your engine; I felt like a 2000 Volkswagen that someone converted into a monster truck: perfectly me, perfectly on-brand—but boosted.

I beg of you: lube your tube with this potion. You have nothing to lose, and all the orgasms to gain.

Foria’s CBD Awaken Arousal Oil can be purchased at Foria and Garmentory.