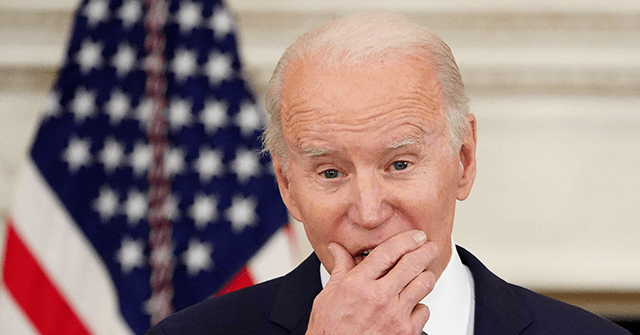 President Joe Biden may have to fire himself for calling Peter Doocy a “stupid son of a bitch” because he told his staff in 2021 that he had a zero-tolerance policy toward treating others with disrespect.

During a hot mic moment on Monday, Joe Biden called Peter Doocy of Fox News a “stupid son of a bitch” for asking a question about inflation.

“Do you think inflation is a political liability in the midterms?” Doocy asked the president.

“It’s a great asset,” the president sarcastically responded. “More inflation. What a stupid son of a bitch.”

.@JoeBiden doesn’t like it when reporters ask about inflation: “What a stupid son of a bitch.” pic.twitter.com/tF2oIogVvZ

As it turns out, the man who promised to restore civility in the White House has violated his own rule. In 2021, when swearing-in dozens of appointees and staffers upon his inauguration, the president said, “I will fire you on the spot” for treating others with disrespect.

“I’m not joking when I say this, if you are ever working with me and I hear you treat another colleague with disrespect, talk down to someone, I promise you, I will fire you on the spot,” he said.

“Everyone, every single person, regardless of their background, is entitled to be treated with dignity,” Biden added. “I expect you to do that for all the folks you deal with.”

Biden further emphasized that he works for the people and not the other way around.

Joe Biden in January of 2021: “But I’m not joking when I say this, if you are ever working with me and I hear you treat another colleague with disrespect, talk down to someone, I promise you I will fire you on the spot.” pic.twitter.com/XXH5GoRORn

Biden is not the only one whose past statements came back to haunt him on Monday. In fact, several members were reminded of statements made during the Trump administration as they dismissed the president’s rhetoric toward Doocy.

Stelter apparently thinks Trump calling a journalist a son of a bitch exposed reporters to “threats and intimidation” but Biden doing it should just be dismissed as a mere “blip.” pic.twitter.com/OtimT8sdkU

Why yes he did, @ChrisLHayes. pic.twitter.com/pOh4ivgGtD

According to Peter Doocy, Biden called him on Monday night to say the comment was “nothing personal.”

“He called my cell phone. He said, ‘It’s nothing personal, pal.’ And we went back and forth, and we talked about, just kind of, moving forward. And I made sure to tell him that I’m always going to try to ask something different from what everybody else is asking. And he said, ‘You’ve got to!’” Doocy told Sean Hannity.

“Did he apologize?” Hannity asked.

“He cleared the air, and I appreciate it. We had a nice call,” Doocy replied.

“That is not an answer. Did he apologize? That doesn’t sound like an apology,” Hannity pressed.

“He said it is nothing personal, pal. And I told him I appreciated him reaching out,” Doocy emphasized. “With all the stuff going on, I appreciate that the president took a couple of minutes out of his evening while he was still at the desk to give me a call and clear the air.”