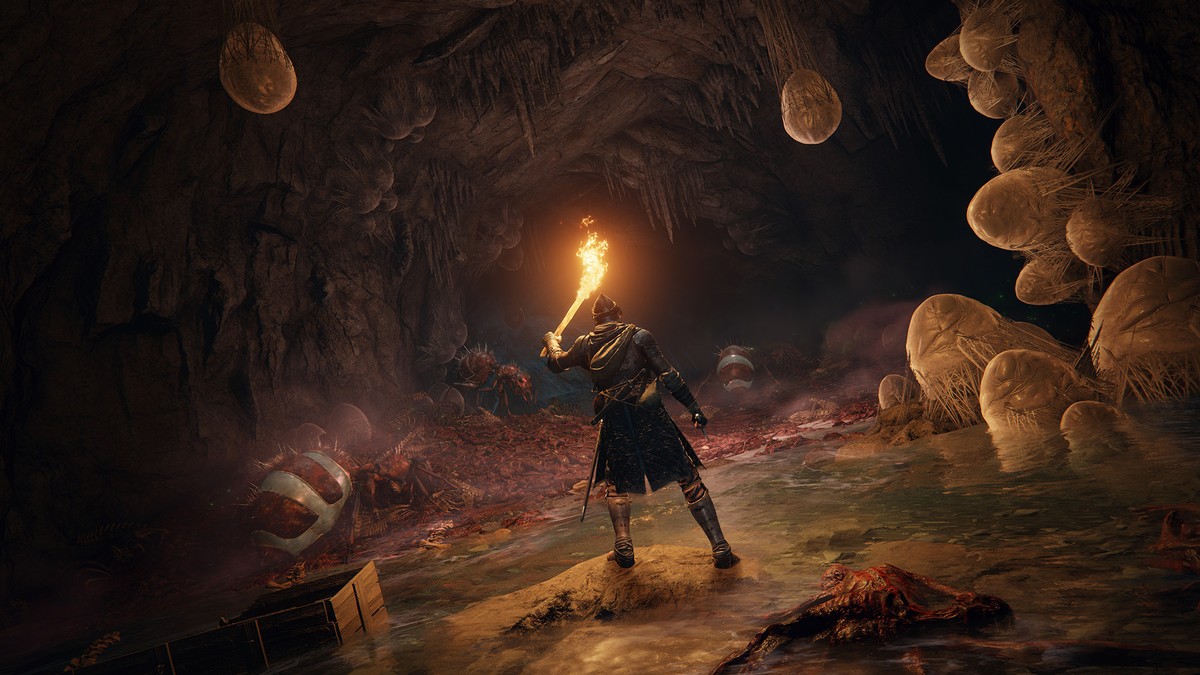 Elden Ring came out just as I began to feel at my most abandoned and powerless as a chronically ill person in a global pandemic. A COVID surge had no sooner crested and begun to recede than mask mandates were being lifted, despite the fact that new variants were already appearing, with the promise of more behind them. Public messaging from politicians and major media sources devolved into gaslighting and propaganda: everyone was told to resume working, shopping, and living as if the pandemic were already over, as if the last two years were a dream it was time to wake up from.

I expected the uncompromising grimness of Elden Ring to amplify to my feelings of frustration and hopelessness. Instead, I felt relief. At least in the Lands Between, there’s no hiding how bad things truly are.

The art design evokes primal fears of ecological devastation. Characters reference the cataclysmic Shattering with little more than tired resignation and take us on journeys that reveal layer after layer of trauma. The rich and powerful hide away in crumbling fortresses or struggle to solidify their claims to power in ever more horrifying ways. Ordinary people are left to fend for themselves, waiting for something, anything, to change. The world is so openly broken that one woman blames herself for her cowardice at not volunteering for dismemberment and grafting alongside her fallen men.

Riding around landscapes of bleached coral and visible pestilence, there was no need to hide my fear and revulsion. There is plenty to question about the motives of the Two Fingers and the methods of the Tarnished, but there is no doubt that the Shattering has created an impossible stalemate that locked the world in perpetual suffering. There is certainly no pretense that the golden age lives on; those who want us to reclaim the power of the Elden Ring are pushing towards new futures, not trying to resurrect the past. Even at points where characters seem to have made peace with their more terrifying neighbors, we are still clearly meant to feel horror and disgust when giant disembodied hands erupt from the ground or a face is revealed in a place it absolutely should not be.

No such shared understanding exists in the real world. Withdrawing virus protections with no plan to prevent future waves or protect the high-risk has left many of us feeling forgotten and confused. When masks are scarce in regions where community spread is still present, places like grocery stores and dentists’ offices become inaccessible to people undergoing chemotherapy or being treated for autoimmune diseases. Nearly half of Americans have an “underlying condition” that makes them more susceptible to the virus; young children cannot currently be vaccinated at all, putting them at risk for significant long-term health complications. Watching precautions disappear prematurely has been scary enough as someone in a higher-risk group, but it’s the way that danger has been twisted into “freedom” and “normalcy” by those in power that has made it a special kind of horror.

The absence of this kind of national gaslighting in the Lands Between has been extremely cathartic. Being in a place where things were so unquestionably wrong helped me understand why I’ve felt so on edge when everything is supposedly getting better. Of course, honesty about the state of the world won’t fix our problems; we are long past “flattening the curve” through any kind of individual action. But our choices still have one power: they can add to the weight of denial, or they can demonstrate solidarity with those who are most at risk. We may not be able to implement the structural changes needed to make our spaces safe for all, but we can learn to integrate precautions into our lives so that high-risk people can stay connected and engaged. We can work, shop, and live in ways that communicate no one is expendable, whatever the dominant narrative may be.

Like most people over the last few years, I tend to use games to escape to better worlds. I did not expect to feel validated by a worse one, one so brutally honest that I had space to admit that everything is not OK.

Elizabeth K. Hinnant is a chronically-ill freelance writer, knitter, and one-time Chemist who lives in Atlanta. She can be found on Instagram at @ElizabethKHinnant and Twitter at @LizHinnant.