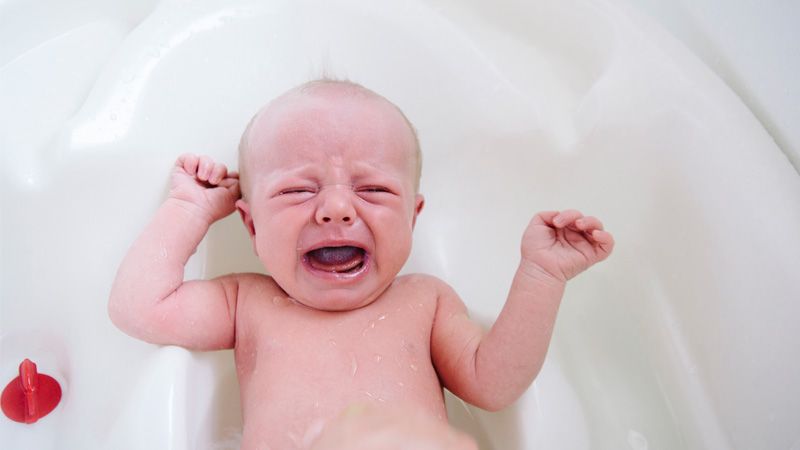 A baby in the UK drowned in a bathtub after her mom, who’d received AstraZeneca’s Covid-19 vaccine a day earlier, fainted during the bath routine.

The incident occurred last March as the mom, lawyer Louise Atkinson, blacked out while giving 9-month-old Eleanor a bath at their home in Dorset.

Atkinson’s husband James reportedly arrived home to find the bathroom door was blocked by his fainted wife’s body, then entered the lavatory to find Eleanor blue and face down in about three inches of water.

“Mr Atkinson picked her out of the water and woke his wife by grabbing hold of her. He then laid Ellie on the bathroom floor where he began CPR while calling 999 on speakerphone,” the Daily Mail reports.

“Mr Atkinson, a business manager, carried on the resuscitation attempts until the emergency services arrived six minutes later at their £500,000 home in Christchurch, Dorset.”

While the baby was flown by helicopter to Southampton General Hospital in Hampshire, efforts to revive her were unsuccessful and she was pronounced dead four hours later.

The family discussed the tragic day during an inquest into the death, where the distraught mother said she’d been stressing out over making arrangements for Eleanor’s upcoming heart surgery.

Mrs Atkinson said she decided to give her daughter a bath as she had been sick during her morning feed.

She explained the nine-month-old needed a ‘surgical wash’ ahead of being admitted to hospital for her procedure.

An emotional Mrs Atkinson told the inquest: ‘I started to pick her up and that’s all I can remember.

‘The next thing I can remember is James shouting and pulling at me.’

Medical examiners believed Eleanor could have been submerged for longer than 30 minutes.

Addressing the possibility the vaccine caused the blackout, Atkinson, who said she’d only ever fainted twice in her life during her late teens, described feeling “strange and not myself” after the jab.

The inquest also learned Mrs. Atkinson again fainted while visiting her daughter’s grave in June 2021, one day after receiving her second AstraZeneca jab.

“On the day after my second jab in June 2021 I went to see Ellie because she is buried quite near to us and we go every day,” the bereaved mother described.

“I walked there and crouched down by her side and all I can remember after that was a guy helping me.”

“He said he had seen me starting to fall and I was disorientated.”

A Dorset Police Sergeant testified the vaccine was considered to be a contributing factor to Atkinson’s fainting spell.

“We concluded it was a tragic accident that Ellie had died of drowning in the bath and potentially there were contributing factors to this,” Detective Sergeant Phil Read said, according to the Mail.

“One being the potential adverse effect of the Covid vaccine. Mrs Atkinson had also had a lack of sleep as they were going through a stressful time. She had not eaten and is a slim build.”

“All these factors could have caused her potentially to have stood up to bend down to pick Ellie up and pass out.”

AstraZeneca’s Covid jab has been blamed for numerous adverse reactions and deaths in the UK.

In May, BBC radio presenter Lisa Shaw suffered headaches before passing away from blood clots believed to be related to AstraZeneca’s Covid-19 vaccine.

A mother of three in Aylestone, Leicester, also died after developing blood clots as a result of receiving Astrazeneca’s experimental mRNA jab, her family reported.

Proof: We Are In A Pandemic Of The Vaccinated