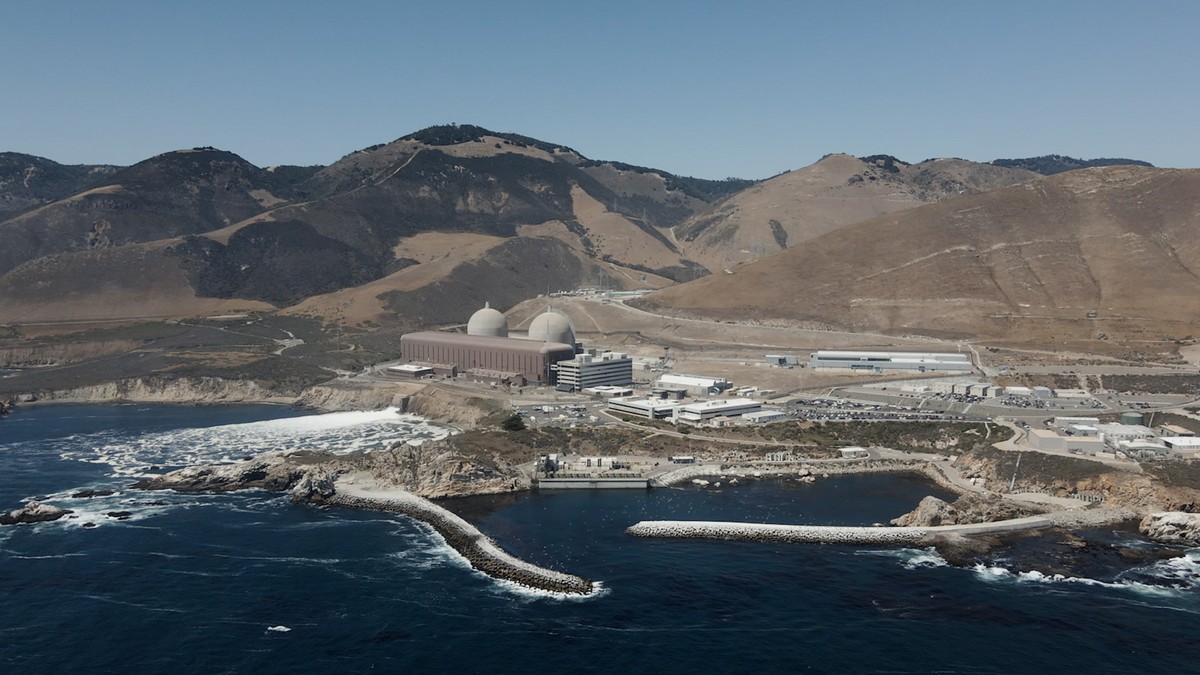 Just north of San Diego, sandwiched between a popular surf spot and the I-5 freeway, sits roughly 3.6 million pounds of nuclear waste. There are no leaky barrels of green goo like in The Simpsons; the real-life version occupies a space barely the size of a football field, with thousands of radioactive uranium fuel rods encased under tons of concrete and steel.

On the surface, it’s not dangerously radioactive—no special protective gear is required to stand near the storage area. But in worst-case scenarios, the material underground could be used to make a dirty bomb, or trigger a Fukushima-level environmental catastrophe on the Pacific Coast.

The San Onofre Nuclear Generating Station is protected by layers of security and armed guards. It’s also designed to withstand earthquakes and tsunamis, according to Al Bates, regulatory and oversight manager with Southern California Edison, the company that owns the plant and is now in the process of taking it offline.

San Onofre stopped operating in 2012, and contractors are now busy demolishing almost the entire facility, including the reactors and their massive concrete containment domes. The goal is to make the hulking old plant essentially disappear, Bates told VICE News, leaving no trace of the infrastructure that stood for over 50 years and once generated around 9 percent of California’s electricity. Today, as Bates put it, “It’s the boneyard of a nuclear plant.”

“I envision a sand volleyball court right here,” he said, gesturing toward a pile of debris. “It’s going to go back to essentially what was here to begin with, which was a beach.”

But at least for now, the 3.6 million pounds of waste must stay put. The federal government has not agreed on a long-term storage solution, so all of the spent fuel from San Onofre will remain stored on site indefinitely. It’s the same with dozens of other nuclear plants across the United States, one of many factors complicating decisions about whether to wean the power grid off nuclear or double down with new long-term investments.

The decommissioning of San Onofre, scheduled for completion in 2029, is happening amid broader efforts around the world to pivot away from nuclear energy in favor of renewables like wind, solar, and hydropower. But California, like many places trying to make the switch, is now reconsidering, finding that kicking a nuclear habit built up over decades is not the straightforward proposition it once seemed.

Nuclear plants still supply nearly 20 percent of America’s electricity, and aside from the radioactive waste, supporters argue they are surprisingly good for the climate. With low carbon emissions and around-the-clock operating capabilities, some experts see nuclear as a way to supplement other sources that have the drawback of fluctuating with weather and seasons.

There are currently 54 commercially operating nuclear power plants with 92 nuclear power reactors in 28 states, mostly located east of the Mississippi. Roughly a third of U.S. carbon dioxide emissions are directly linked to creating electricity by burning fossil fuels, with renewable sources currently accounting for just over 12 percent of total U.S. energy consumption, even though nearly twice that much renewable power is being generated. In other words, Americans are making nearly twice as much wind, solar, and hydro energy than they currently use.

The problem, according to Stephen Chu, a physics professor at Stanford University and former U.S. Energy Secretary, is that there’s still no good way to store electricity—what gets generated has to be used right away—so the steady output of a nuclear plant remains very appealing.

“You can’t go to 100 percent wind, solar, hydro,” said Chu. “Maybe if you went up tenfold in hydro storage, you could do that. But we don’t have enough energy storage that lasts a week long, even several days long, let alone seasonal storage in the United States.”

California has one nuclear plant left, Diablo Canyon, on the Central Coast near San Luis Obispo. Chu was one of 79 experts who co-signed a public letter calling for it to stay open, writing that, “considering our climate crisis, closing the plant is not only irresponsible, the consequences could be catastrophic.”

Diablo Canyon was scheduled to be shut down by 2025, but Gov. Gavin Newsom has said the state will seek to tap $6 billion in federal funds earmarked by the Biden administration to save nuclear reactors facing closure. The fund was created, Energy Secretary Jennifer Granholm said, because “nuclear power plants contribute more than half of our carbon-free electricity.”

There’s also a campaign—Mothers for Nuclear—pushing to ensure Diablo Canyon remains open. Some members work at the plant, including co-founder Kristin Zaitz, a civil engineer who was one of several members recently at California’s state capitol lobbying lawmakers from a lemonade stand with her kids. She recalled going from nuclear skeptic to evangelist.

“It took me a long time to figure out that my values aligned with nuclear,” Zaitz said. “We produce electricity that’s carbon free on a small land footprint. And that’s pretty attractive to someone like me who cares about the environment.”

California’s governor has said his own views on nuclear changed in August 2020, when parts of the state experienced rolling blackouts during a heat wave. With air conditioners pumping late into the evening, after the state’s solar farms had stopped producing, causing the main grid operator to run short on electricity. Newsom has since called keeping Diablo Canyon open “the righteous and right climate decision.”

Diablo Canyon generates around 9 percent of California’s power, and replacing that output would likely require burning natural gas. That’s what happened with San Onofre, where the closure a decade ago was followed by a 2 percent increase in emissions.

Polling earlier this year by the University of California, Berkeley and the Los Angeles Times found that 44 percent of state voters support building more nuclear reactors. That’s up significantly from years past, and reflective of nuclear power regaining acceptance, especially among climate pragmatists trying to meet current energy demands without pumping more carbon into the atmosphere.

With Germany suddenly facing gas shortages due to Russia’s invasion of Ukraine, the country is rethinking its plans to close its last three nuclear power plants as planned at the end of this year. The European Union has labeled nuclear energy a “green investment,” unlocking funds for plants that replace coal-fired stations. After attempting to phase out nuclear, South Korea just planned to restart construction on two reactors and extend the lifespan of those already in operation.

Longtime critics of nuclear energy, including Linda Seeley, vice president of Mothers for Peace, a group fighting to close Diablo Canyon, argue that keeping aging plants online is a safety risk—not least because the facility is located along earthquake fault lines. Delaying closure also pushes off the important work of making the complete switch to renewable energy, Seeley said, and she’s even willing to tolerate rolling blackouts if it’s the price for going nuke free.

“The big part is the nuclear waste,” Seeley said. “It’s like, ‘Oh, eat, drink and be merry and let’s make more nuclear waste for people 500 generations from now to live with. And that’s the gift that we’re giving them.”

‘This Is Entirely Unlike Fukushima’

Like San Onofre, the waste at Diablo Canyon is also being stored on site. Around the country, roughly 86,000 metric tons of radioactive waste has piled up at commercial nuclear power plants over the years. The federal government initially chose Nevada’s Yucca Mountain as a permanent repository for the waste, but the plan was halted in 2010 amid concerns about leaks and opposition from state lawmakers.

Last month, the Nuclear Regulatory Commission cleared the way for a proposed facility on land in New Mexico that could be used for interim storage of about 8,680 metric tons of nuclear waste from commercial plants like San Onofre. The plan, however, faces pushback from state leaders opposed to turning land currently used for cattle grazing into a nuclear dumping ground.

At San Onofre, the waste is just a few hundred feet from the beach. Surfers could be seen paddling out into the waves nearby. Watchdogs have warned that San Onofre poses a safety risk, pointing to incidents in 2018 that involved problems with canisters used to store radioactive waste, including one that nearly dropped 18 feet while loading. (The plant operator was fined $116,000 for “failure to ensure the availability of important safety equipment to provide redundant drop protection.”)

Bates, the Southern California Edison regulatory and oversight manager, insisted that the waste is stored safely. While the plant is located along the Pacific Coast, he said there are multiple safeguards to avoid a repeat of Fukushima, where a powerful earthquake in 2011 triggered tsunami waves that took out a Japanese nuclear plant and leaked radioactivity into the ocean.

“There are safety systems backed up by other safety systems to ensure that no leaks to the public would ever occur,” Bates said. “This is entirely unlike Fukushima.”

As for the waste, Bates says storing the radioactive material requires security and technical safeguards, but he argues that three decades worth of nuclear fuel takes up far less space than the equivalent in coal ash.

Surveying what was left of the power plant, Bates said there would be no way to bring it back online. If California decides to embrace nuclear energy in the long term, he said, it will require building a whole new facility, a process that takes around a decade and can cost in the range of $5-10 billion. What’s left of San Onofre can’t be salvaged and brought back online.

“Unfortunately, that time is long past for San Onofre,” Bates said. “It’s all been gutted. So it’d be far easier to create a blank slate and start over again than it would be to try to come back from the dead.”