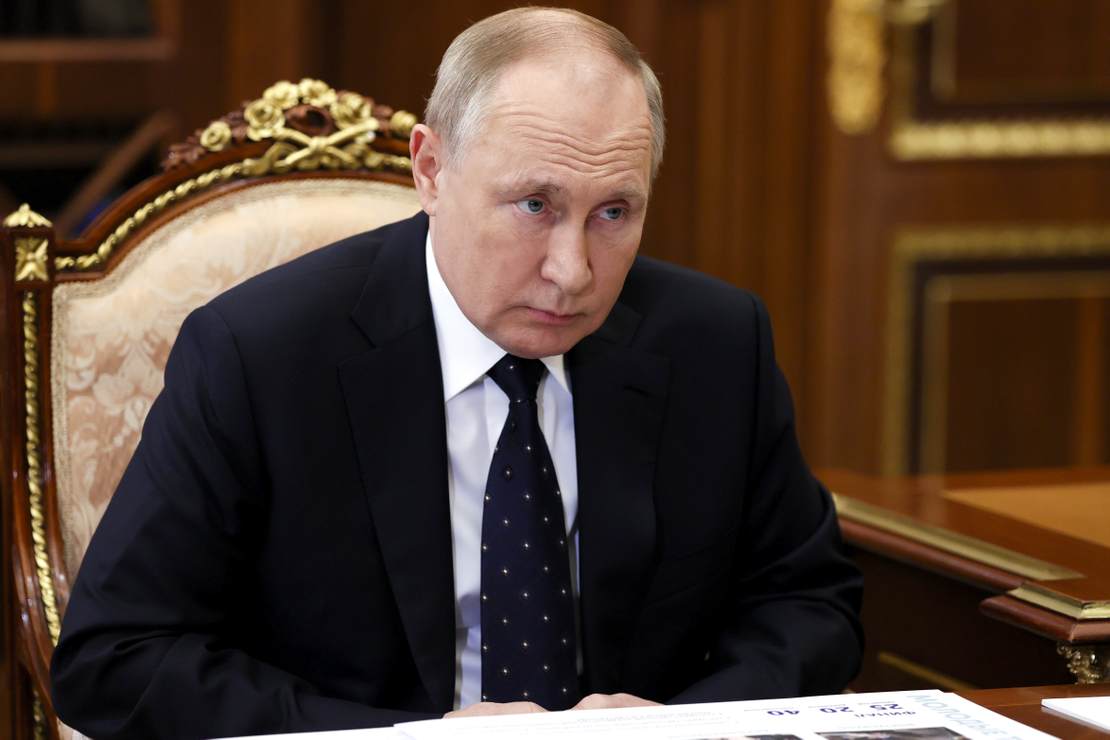 I don’t think regime change is the goal in the sense that the U.S. and NATO will accept nothing less. If Putin said “you win” and pulled out of Ukraine tomorrow, sanctions — at least the most oppressive sanctions — would lift. The goal in crippling Russia economically is to communicate to Putin how determined the west is to uphold its NATO commitments. The message to him is “We’re willing to go this far to defend a non-member ally like Ukraine. Imagine how much further we’d go to defend a member.”

In fact, however the next few weeks play out, I suspect the heroic Ukrainian resistance has made the odds of Putin pressing his luck with NATO’s eastern European front far less likely. The Russian army looks like a paper tiger. If Putin confronts NATO on the battlefield, there’s now every reason to think Russia would face a humiliation worse than what they’re experiencing in Kiev.

Still, as justified as sanctions are, I confess to being nervous at the magnitude of the economic firepower the U.S. and western Europe are about to bring to bear on Russia. Putin made news this morning when he announced that his nuclear forces were going on alert but that was probably — probably — just a signal to his enemies, foreign and domestic, not to interfere with what’s coming next in Ukraine. Russia tried to make quick work of the Ukrainian military and its government with as little loss of life as possible in hopes of breaking Ukraine’s will to resist and the west’s will to respond. That strategy has failed. To subdue Ukraine, Russia will have to get rough. Today’s nuclear threat was a warning to the west and to his own people not to try to rescue Ukraine when the rough stuff starts.

The financial pain we’re about to impose on Russia is no bluff, though. It’s the functional equivalent of dropping an atomic bomb on their economy. David Frum is every inch a hawk but even he’s leery at the prospect of the world’s biggest nuclear power being destabilized.

The EU Commission announced this afternoon that the European Central Bank will deploy its most powerful financial weapon against Russian aggression. Several hours later, Secretary of State Antony Blinken announced that the Federal Reserve will impose sanctions of its own upon the Russian central bank.

Central-bank sanctions are a weapon so devastating, in fact, that the only question is whether they might do more damage than Western governments might wish. They could potentially bankrupt the entire Russian banking system and push the ruble into worthlessness…

And here we bump into the limits of central-bank sanctions as a financial weapon: A weapon that altogether crushes an adversary’s banking system may be just a little too powerful. The West wants to administer penalties that cause Russia to alter its aggressive behavior, not to crush the Russian economy. The central-bank weapon is so strong that it might indeed provoke Putin into fiercer aggression as a desperate last gamble. So the next question is: Is there any way to use the central-bank-sanctions weapon more incrementally?

Cut off Russia’s central bank entirely and the country may collapse, generating misery and desperation on a far greater scale. Frum suggests putting the bank on an international “allowance” instead, giving it access to enough money to avoid a total descent into anarchy while limiting that access sufficiently to cause meaningful deprivation.

Those mega-sanctions could be avoided if Russia were to throw in the towel on the war, of course, but no one expects Putin to do that. He’s gambled his legacy on conquering Ukraine. If he quits in less than a week, his legacy will be overseeing Ukraine’s and the west’s triumph over Russian imperialism. It’s unthinkable.

Which brings us to the question in the headline. If all sides understand that sanctions won’t end the invasion, might the point be to end Putin?

If the war were popular in Russia, the people might be willing to bear the hardships imposed on the west as a matter of national defiance. But the war isn’t popular.

MOSCOW (AP) — Protests against Russia’s invasion of Ukraine erupt in Moscow and other Russian cities amid ominous Kremlin threats.

BTW, expect to see a massive exodus…from Russia. Anyone with means and a passport is trying to get out right now. Many urban, educated Russians are horrified and terrified, and they know that it won’t just face economic hardship at home but political repression, too.

The head of the Russian delegation at a major U.N. climate meeting apologized Sunday for his country’s invasion of Ukraine, telling government ministers and scientists that “those who know what is happening fail to find any justification for the attack.”
https://t.co/LwGVDCn6aO

There are tantalizing reports circulating that the rash of Russian vehicles running out of gas in Ukraine isn’t entirely a problem of maintaining supply lines. Some might be acts of self-sabotage driven by poor morale:

don’t mean, that they’re suddenly stricken with shame & don’t want to obey orders. What I’m told is that their reasons are much simpler than that: heavy machinery is an easy target for anybody, while a death trap for the riders & they don’t want to die So it’s fear, not sympathy

Even if Russians were willing to bear the costs of the war, consider what a strategic fiasco it’s become for their country after just a week. Putin, allegedly a shrewd global chess player, is eating the pieces:

So far, Putin’s war, borne of his own insecurity and nihilism, has:

• unified the West
• unified Ukraine
• drawn condemnation of even Orban (!)
• exposed the weakness of his own army
• cratered Russia’s crap economy
• made Zelensky into a legend

That tweet from yesterday is already out of date: The latest colossal backfire came this morning when Germany’s new chancellor, Olaf Scholz, announced that his country will now boost defense spending beyond two percent of GDP, the minimum required by NATO, in an effort to rebuild German military strength. Putin has achieved something that other Russian leaders managed to avoid for 75 years, giving Germany a good reason to rearm. He did so while managing to make his country an international pariah with record speed. And he committed to the plan in service to an unprovoked war on a neighboring state whom most Russians view fraternally. Read this for a taste of how contemptuous many of Putin’s subjects are of the invasion. State media is scrambling to sanitize news of what’s happening in Ukraine in the belief that public unrest would get dramatically worse if Russians knew the extent of it.

Even China, Russia’s last powerful friend, seems to be squeamish:

Okay this is pretty interesting, Chinese state affiliated media is posting a video of Chinese students in Kyiv asking for peace.

It’s not outright pro Ukrainian, but it definitely does not paint the Russians in the best light. https://t.co/PdUOmqBx7a

That Putin would be willing to risk all of this in a quixotic attempt to reintegrate Ukraine into some long-gone Russian empire suggests he isn’t thinking rationally. What if there’s a reason for that?

Interesting from Sen. Marco Rubio, R-Fl, vice chair of Senate Intel Committee, who notes that Putin “has created a system of people not telling him bad news or facts that contradict his preferences.

“He also appears to have some neuro/physiological health issues…

Condoleezza Rice said he now seems “delusional” and “erratic” compared to how he behaved when she dealt with him as secretary of state. Michael McFaul, a former ambassador to Russia, also thinks Putin appears “unhinged”:

“I’m nervous that Mr. Putin has been believing his own propaganda for decades. … He’s out at his compound, doesn’t come into town very much, & under covid he’s been even more isolated.” pic.twitter.com/GJQRMazmQk

Even if the west were willing to give him an off-ramp by agreeing to drop sanctions if Putin retreats to the Donbas, he might not be rational enough to take it. And maybe the west isn’t willing to do that. Maybe Putin has gone so far rogue in menacing Ukraine and announcing his grander imperial ambitions that nothing short of his ouster at this point will heal the breach by reassuring the west:

Yes, CN can keep him afloat, or maybe he can really hunker down, N Korea-style

But for RU to re-normalize, he’ll have to go

In time RU elites, chafing at the restrictions, will see this https://t.co/m4N4rTseq4

The sanctions may ease in exchange for some sort of Russian withdrawal but I think Kelly’s right that Putin will be treated diplomatically going forward more like Kim Jong Un than, say, Xi Jinping. The only way for Russia to regain “normal” status in international diplomacy will be to replace him with a new leader.

His deputies, surveying the chaos around them on every front, must be thinking about it. Especially now that he’s begun babbling about moving to a higher state of nuclear readiness. Stay tuned.

I’ll leave you with this thread wisely urging western powers not to respond in kind to his nuclear escalation. In fact, they should do the opposite by stating clearly that they won’t initiate hostilities with Russia and identifying red lines that they won’t cross. Deny Putin a pretext to claim that he’s escalating in the nuclear sphere for “defensive” reasons. If he’s going to resort to nuclear blackmail, let him own it. And let his deputies calculate that risk in weighing whether it’s time for a new boss in Moscow.