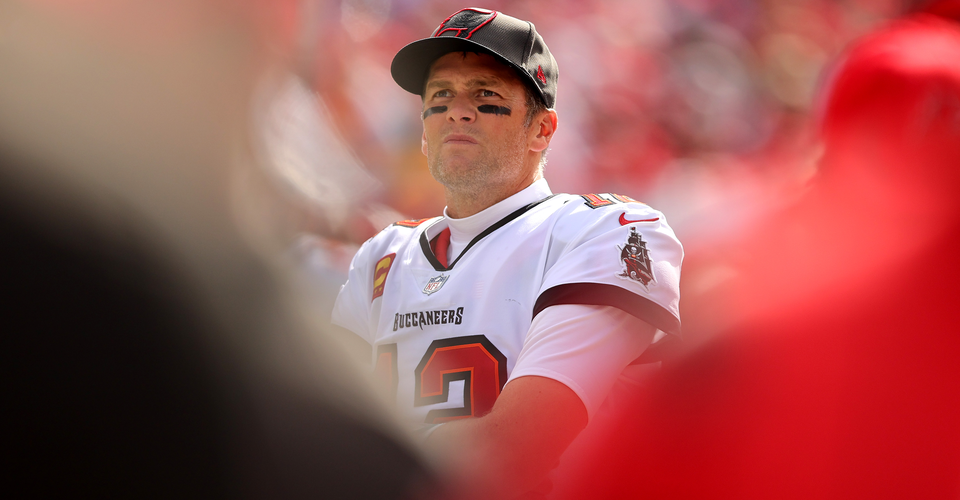 Somewhere, maybe in the attic of his childhood home in San Mateo, California, or perhaps in an alcove of a Florida bunker, I imagine there must be a portrait of Thomas Edward Patrick Brady Jr. that shows him gnarled and gray, his throwing arm wizened, the twinkle in his eye occluded by glaucoma and cataracts. Because what, other than some dark Dorian Gray sorcery, some sinister Faustian bargain, can account for the Methuselahian magic of Tom Brady’s geriatric greatness (Super Bowl MVP last year, for a gobsmacking fifth time, at age 43! Conceivably the regular-season MVP candidate again this year, for what would be the fourth time, at age 44!) as a football player? This can’t all have been avocado ice cream and his fitness guru Alex Guerrero’s “pliability” exercises, can it?

Yesterday, ESPN’s report that Brady would shortly be announcing his retirement sparked confusion and disbelief all over. Brady has been playing so long, and has been so good for so long—years past the typical expiration date for professional athletes—that it’s started to seem he might stick around forever. He had previously said he would play until he was at least 45, or until “I suck”—neither of which, quite manifestly, is true yet. He still has a year remaining on his contract with the Tampa Bay Buccaneers.

Compounding the confusion was Brady’s own company, TB12, which posted and then deleted a tweet that seemed to acknowledge the retirement news. Then both his father, Tom Brady Sr., and the Buccaneers’ front office put out statements saying that the quarterback hadn’t made a decision yet. Finally, his agent, Don Yee, released his own, bizarre non-denial denial, the seeming implication of which was that Brady had made up his mind but, for whatever reason, wasn’t quite ready to roll out his plans yet. All this threatened to overshadow the NFL playoffs—including this afternoon’s conference championships—an outcome that Brady himself, who cares deeply about his own image and about his football brethren, surely did not intend.

But here he was, still dominating the football landscape even as he was reportedly trying to recede from it. Brady has reached a point where he exists outside of time, or on some metaphysical time scale that he alone controls and where the normal rules of aging, and beginnings and ends, do not apply.

Other athletes have become imprinted in legend because of the unlikely circus-sideshow freakishness of their attainments. Muggsy Bogues, who starred for the Charlotte Hornets in the NBA in the 1980s, was a Thumbelina-ish 5 feet 3 inches in a league where typical heights run a foot and half taller than that. William “the Refrigerator” Perry, of the 1985 NFL-champion Chicago Bears, was better known for his kitchen-appliance-size rotundity and his novelty-act cameos on offense than for his skill as a defensive lineman. Even in the category of athletic longevity there have been comparably ageless outliers: In 2007, Julio Franco suited up for the Atlanta Braves at an absurdly late-middle-age 49, and Jamie Moyer pitched for the Colorado Rockies at the same age, in 2012. Even more absurdly, in 1980, Gordie Howe played professional hockey in the NHL for the Hartford Whalers alongside his adult sons, Mark and Marty, at the age of 52. I am 52 now, and simply getting from the bed to the bathroom in the morning can feel like an Olympian feat of agility and endurance.

But what has set Brady’s accomplishments (way) apart is that even as his advancing age has pushed him into circus-freak territory, his greatness has remained undiminished; in fact, his greatness and his circus-freakishness have merged. Franco appeared once on a Hall of Fame ballot and Moyer was an estimable pitcher, but by the end of their careers both were at best marginal players in a sport not nearly as physically destructive as football. Gordie Howe was one of the greatest hockey players ever, but the bulk of that greatness came well before his first retirement from the sport, in 1971; the last time he led the NHL in scoring was in 1963, at age 35. Tom Brady led the NFL in touchdowns and passing yardage this year, at age 44.

Brady’s astounding statistical accomplishments will be much trumpeted whenever an announcement officially comes, but to cite just a few here: He has appeared in twice as many Super Bowls—10—as any other quarterback, and he won seven of them—three more than any other quarterback and one more than any other team has ever won across more than 50 years of NFL history. As my colleague Derek Thompson recently noted, Brady has won more than twice as many playoff games as the next-most-winning quarterback, Joe Montana, and played in 18 more playoff games than any other player not his teammate. He holds just about every significant career passing record in pro football: regular-season passing yards, completions, and touchdowns; most regular-season wins and playoff victories.

But what’s almost as remarkable as the full body of work Brady has compiled is how much he has achieved at an unprecedentedly advanced age for a football player in the modern era. The average retirement age for an NFL player is 27. Since turning 40 (!), Brady has thrown for almost 23,000 yards and 168 touchdowns, and engineered 10 fourth-quarter comebacks and 13 game-winning drives (a very good career for most quarterbacks).

This season he was not only the oldest current player in the NFL—he was the oldest player by more than four years, an eternity in football time. At the start of this season, he was older than 13 NFL head coaches. He is older than his own offensive coordinator, Byron Leftwich. Many of the quarterbacks who faced off against Brady this year had his poster hanging on the walls of their childhood bedrooms. A growing cohort of NFL players was born after Brady embarked on his pro career, in the spring of 2000. A number of players in the league now are the sons of Brady’s former teammates, taking him into Gordie Howe territory. He has played against Devin Bush Sr. and Devin Bush Jr.; against Ed McCaffrey and his son Christian McCaffrey; against Terrence Metcalf and his son DK Metcalf. In the Super Bowl last year, one of Brady’s teammates, a rookie safety named Antoine Winfield Jr., intercepted a pass for the Buccaneers; in November 2001, that rookie’s father, Antoine Winfield Sr., a cornerback for the Buffalo Bills, intercepted one of Brady’s first passes as a starter for the New England Patriots. Antoine Jr. had then just turned 3.

Scott Stossel: The end of Brady

I suppose I should admit that I’ve been hanging around The Atlantic long enough that a number of my own colleagues were born after I first set foot in these precincts, back in 1992. But the position I play does not require me to get sacked by 300-pound linemen or speeding-freight-train linebackers again and again—as Brady has been 543 times. And that’s not including the thousands of times he’s been late-hit, crunched, bent, twisted, pile-driven, or battered without an official sack being registered. (It also doesn’t include the 13 people he himself has tackled, to their great ignominy.) Forget leading the NFL in passing this year—it’s a marvel that he’s still walking upright.

Brady has played so well for so long that he is an era unto himself, outlasting America’s entire 20-year misadventure in Afghanistan. John Madden, who for many years, dating back to the early 1980s, was the voice of the league, and who was the color commentator for Brady’s first Super Bowl (famously, and wrongly, advising that Brady should not attempt the drive at the end of regulation that won the game), died last month; today’s most perceptive color commentator, Tony Romo, followed Brady into the league as a quarterback and preceded him out of it. (The list of star quarterbacks who have come into the league, burned brightly, and then flamed out while Brady has remained incandescent include Romo, Eli Manning, Drew Brees, Philip Rivers, Andrew Luck, Brady’s own offensive coordinator Leftwich, and most recently Ben Roethlisberger. The list of non-star NFL quarterbacks who have come and gone during Brady’s tenure must number in the scores, if not hundreds.)

As a New Englander—okay, let’s be real, as a Masshole—I revere Brady for the championships he’s brought to the Patriots, for the glory he’s bestowed on the region. But as he’s gotten older, and as I have, my reverence for him has acquired an additional dimension: With intimations of my own mortality getting actuarily louder, Brady’s ability to somehow defy, if not reverse, the normal processes of aging, to rage (gracefully) against the dying of the light, provides the illusion that decay and death can maybe be deferred a little longer. Of course, his agelessness also makes me hate him a little, too, for the same reasons the rest of his seemingly perfect life does; I can only imagine the hatred that, say, New York Jets fans must feel for him.

Read: The case against Tom Brady

Brady has never been the strongest quarterback, nor the most athletic, nor, certainly, the fastest. This undoubtedly has helped his longevity; you can’t lose what you’ve never had. What he does have, in addition to great throwing accuracy, is the ability to effectively slow things down on the field, to think faster than things on the field are moving, to “make his read” and “go through his progressions,” as the analysts say, and make the best, most odds-conferring decision again and again. He also has a quick release—the ability to get rid of the ball in a hurry—one that’s amazingly gotten faster as he’s gotten older, a remarkable but necessary feat of self-preservation. Again and again, as the hourglass has run out on games, he has excelled; his ability to manage the clock is unsurpassed. Perhaps this ability has extended beyond the field of play.

Interestingly, as the news of an imminent retirement announcement was reported by ESPN yesterday afternoon, Brady seemed to have lost control of the narrative. This rarely happens. He is always scripting unlikely endings (he led 42 fourth-quarter comebacks, nine of them in the playoffs)—and sometimes impossibly unlikely endings, most famously coming back from 28–3 in the second half of Super Bowl LI to beat the Atlanta Falcons. Last weekend, in the NFC divisional playoff round against the Los Angeles Rams, he was down, 27–3, even further into the game than he had been against the Falcons. Once again, he clawed his team back into the game. His greatness was visibly pressing on the Rams’ collective psyche as they blundered again and again, visions of that Super Bowl comeback, and many others, dancing in their head. Astonishingly, he managed to draw the Buccaneers even with 42 seconds left.

But in that instance, events got away from him: Matthew Stafford drove the Rams down the field for a last-second field goal. And then yesterday, the ESPN report seemed to catch Brady and his inner circle by surprise. Maybe he’s not retiring (I’ve gotten this wrong before). Maybe his command of the clock and the narrative remains as firm as ever, and he will play out his contract and lead the Bucs to the Super Bowl again next year.

Whatever the plan turns out to be, I suspect No. 12 is keeping his head about him, even if the original play call has broken down. Because one of the lessons of his career has been that if you can stay in the moment, you can slow time down and make it submit to you—and that even when things appear dark and helpless (28–3, for God’s sake), if you just keep forging ahead and doing your best, things may yet turn out far better than appears possible. There are worse models for our time.