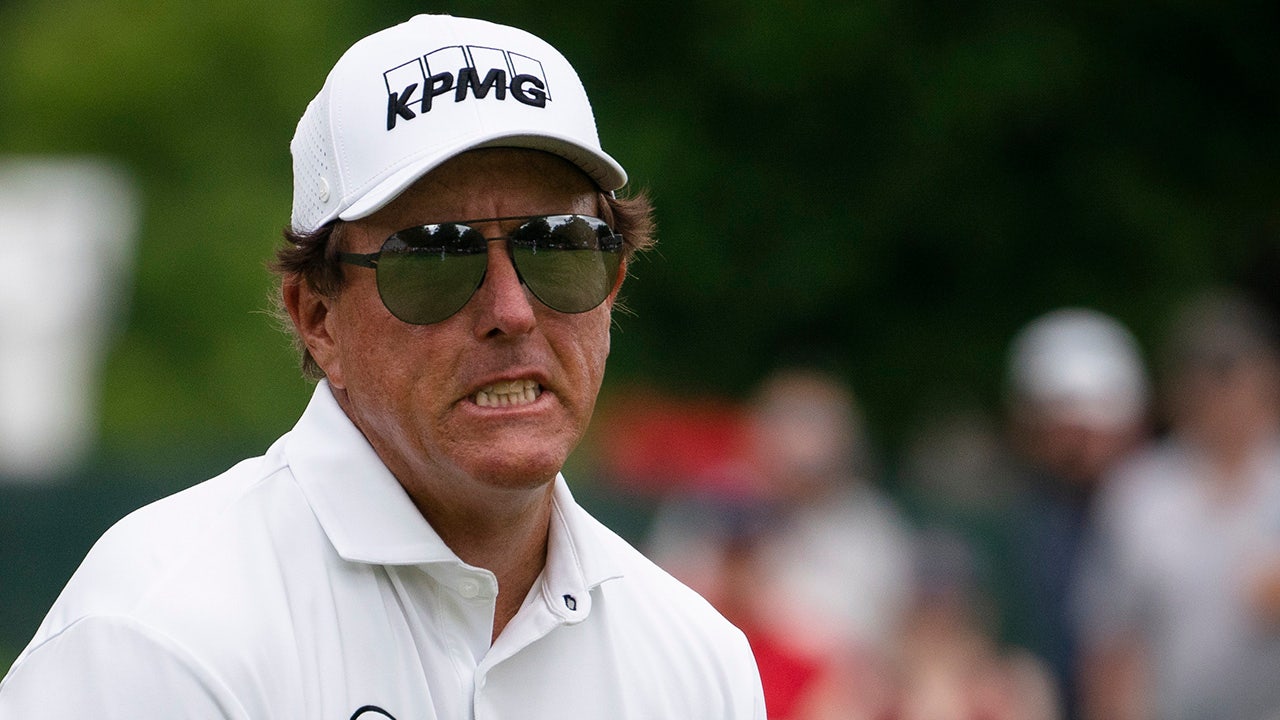 PGA Tour Commissioner Jay Monahan says he has “zero complacency” when it comes to the threat of a Saudi-funded rival league, and he has a clear message for any player still tempted to leave.

“I told the players we’re moving on and anyone on the fence needs to make a decision,” Monahan said Wednesday in a telephone interview.

Phil Mickelson watches his tee shot on the 13th hole during the first round of The Players Championship golf tournament Thursday, March 14, 2019, in Ponte Vedra Beach, Fla. (AP Photo/Lynne Sladky)

He also emphasized anew that players who sign up for a Saudi golf league will lose their PGA Tour membership and should not expect to get it back.

Monahan said the tour had “incredible momentum” coming off its West Coast swing. None of the top 12 players in the world expressed support for joining a Saudi league, a damaging blow to Greg Norman and his LIV Golf Investments. The endless chatter of a new league was louder than ever last week, centering on the possibility that Norman was on verge of announcing a roster of 20 players.

“All this talk about the league and about money has been distracting to our players, our partners and most importantly our fans,” Monahan said. “We’re focused on legacy, not leverage. You saw it last week with Joaquin Niemann winning, receiving the trophy from a legend (tournament host Tiger Woods) who inspired him to take up the game.

“Those moments can’t be replicated.”

Monahan met with players Tuesday afternoon at the Honda Classic. While the meeting had been scheduled weeks in advance, it began just minutes after Phil Mickelson released a statement in which he apologized for “reckless” remarks about the Saudis and praised Norman’s LIV Golf Investments for sharing his goal of making golf better.

Mickelson did not mention Monahan or the PGA Tour, which he referred to as a “dictatorship” in his explosive comments to Alan Shipnuck, whose biography on Mickelson is due in May. Mickelson also said he and three other top players paid attorneys to write the operating agreement for a new league in which players would have more control.

Monahan declined to comment when asked if Mickelson had been suspended or faces punishment, citing the tour’s longstanding policy of not discussing discipline.

Mickelson said he needed time away without elaborating when or how long it would be. He has not played since the Saudi International three weeks ago. It was in Saudi Arabia where Mickelson first accused the PGA Tour of “obnoxious greed” in an interview with Golf Digest. He also said even the talk of a rival league was providing leverage to get changes he felt were needed on tour.

Most damaging to Mickelson were his vulgar description of the Saudis, and how he was willing to overlook their human rights atrocities if it allowed him a “once-in-a-lifetime” chance to reshape the PGA Tour where he has made nearly $120 million in career earnings and bonuses.

KPMG, a corporate partner with Mickelson since 2008, said Tuesday in an email there was mutual agreement on ending the endorsement contract immediately. Amstel Light said Wednesday it has ended its partnership with the six-time major champion.

Workday did not immediately respond to an email seeking comment, although that contract was believed to be ending in the spring.

Norman’s proposed league took a beating last week in Los Angeles when top players like Jon Rahm and Rory McIlroy repeated strong support for the PGA Tour, and then Dustin Johnson announced on Sunday he was “fully committed” to the tour. Johnson’s statement was among the most influential because he was often connected to the new league without ever having indicated which way he was leaning.

Hours later, Bryson DeChambeau offered more tepid support by saying if the best players were sticking with the PGA Tour, that’s where he would be playing.

Monahan said he thanked the many top players who showed their loyalty, though he didn’t feel as if the threat was over. McIlroy referred to it as “dead in the water” because none of golf’s top players were going.

“There is zero complacency here,” Monahan said. “We will continue to talk to the players and continue to listen.”

FILE – Phil Mickelson walks off the 14th green after missing a birdie putt during the third round at the PGA Championship golf tournament on the Ocean Course, Saturday, May 22, 2021, in Kiawah Island, S.C. Whether his true intentions were chasing Saudi Arabian money or gaining more control over how he thinks the PGA Tour should be run, Mickelson has been exposed for manipulating people to get what he wants.
(AP Photo/David J. Phillip, File)

According to those in the room for his meeting with the players, Monahan’s overall theme was about money — not only how much prize money was projected to grow on the PGA Tour over the length of the broadcast contracts, but how the Saudi league was being built only on money and how much it would take to cause a player to leave.

“I think it’s going to still keep going. I think there will still be talk. Everyone talks about money. They’ve got enough of it,” Brooks Koepka said Wednesday. “They’ll get their guys. Somebody will sell out and go to it.”

Still, the support from top players — Koepka was among the first to speak out — was a boost for the tour as it begins its Florida swing that includes another $12 million purse at the Arnold Palmer Invitational next week, and Woods getting inducted into the World Golf Hall of Fame during The Players Championship.

“I know where a lot of our athletes stand,” Monahan said. “That validation was incredibly impactful and gave us a renewed sense of optimism.”