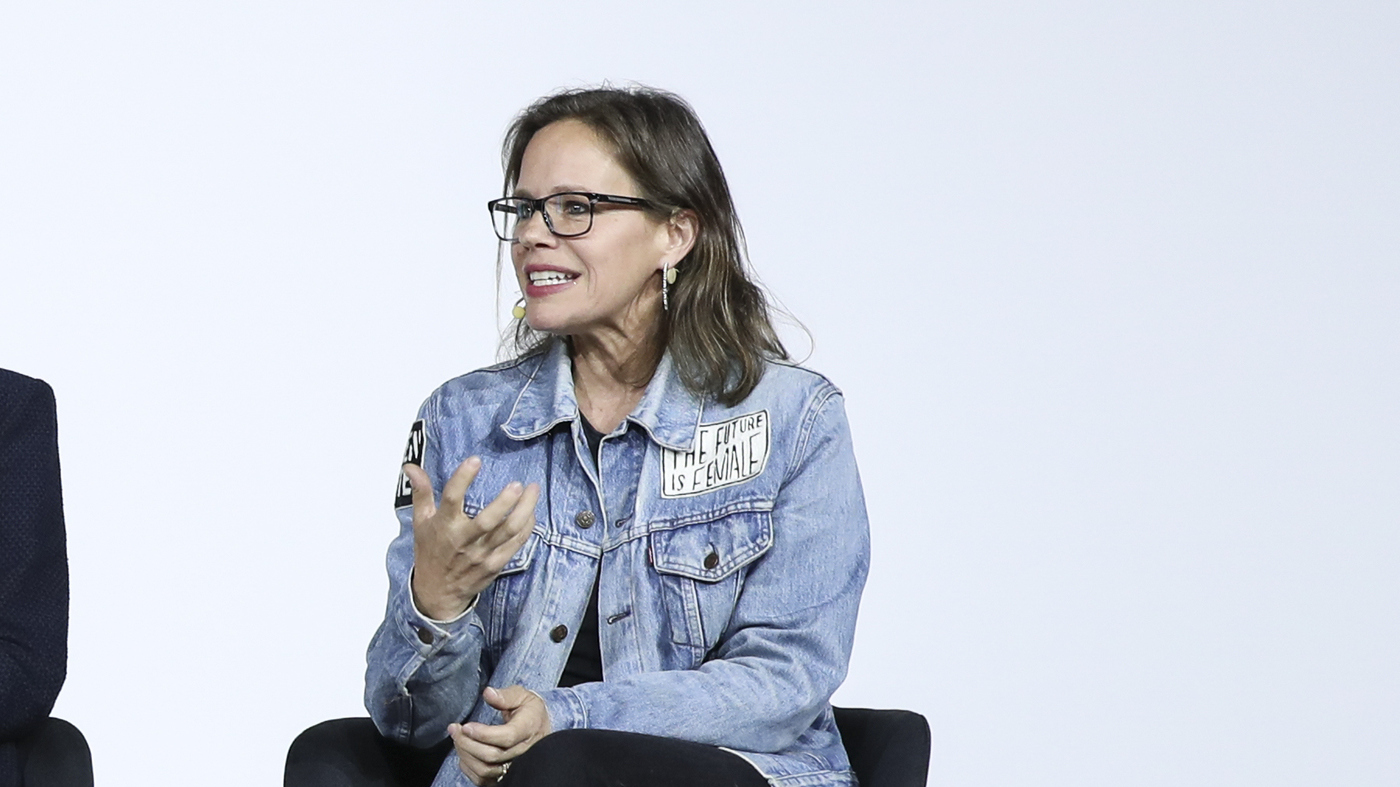 In the spring of 2020, at the start of the pandemic, Jennifer Sey took a hard line, controversial position: Schools should stay open.

At the time, Sey was chief marketing officer at Levi Strauss & Co, with 21 years at the company. Later in the year, Sey got promoted to Levi’s brand president — on a path to potentially become the next CEO. Instead, she has now resigned.

Sey’s resignation made a big splash, as she said she walked away from a $1 million exit package, which would typically include a nondisclosure agreement. Levi’s says no such offer was formally made. Either way, Sey’s exit has prompted big questions about corporations and speech.

Where is the line between personal and professional opinions? And is that line different for high-level executives?

Sey had built her personal brand around outspokenness: She’s a former elite gymnast who has written a book and produced a documentary about abuses in the sport.

During the pandemic, Sey took to Twitter, op-eds and local TV, speaking out against shutdowns of schools and playgrounds. She wrote about the impact of remote learning on students and eventually opposed mask mandates for children altogether.

“I was always very careful. Levi’s was not in my public profile,” Sey says. “I was speaking as a mom of four, a public-school mom of four.” Sometimes, she spoke as a resident of San Francisco, where Levi’s is based. Sey acknowledges her professional task was representing the Levi’s brand, though she says she’s a mom and a child advocate before a business executive.

But is it possible for top executives to wall off a personal campaign from their company’s image?

“It’s such a high-powered position, most people will not separate it out,” says Americus Reed, who studies brands and social identity at the University of Pennsylvania. “You can’t really be C-suite person these days and have a completely separate personal brand.”

Last spring, determined to send her kids to in-person school, Sey moved from San Francisco to Denver. And she filmed more interviews: with author and anti-vaccine campaigner Naomi Wolf, and with Fox News host Laura Ingraham, who has cast doubt on COVID vaccines and measures. Sey didn’t discuss vaccines and says she’s fully vaccinated, but her choice of platform escalated controversy.

Levi’s employees began to complain to human resources and corporate leaders, Sey says, while posts on social media began calling for Levi’s to fire her and for shoppers to boycott the brand. Some of the outcry Sey faced was over her husband’s anti-vaccinations tweets, with which Sey says she disagrees.

At the same time, Sey describes receiving many messages of support from Levi’s workers. And so she never stopped her public commentary on COVID restrictions for children.

She also stayed involved in a campaign to recall members of the San Francisco Board of Education, largely over extended school closures. The push ended this month with a landslide city vote to oust three school-board members.

A key part of the story is Levi’s own history of political speech. The denim company is a storied American brand that has advocated for gay rights, for immigrants, certain gun control measures and, most recently, voting rights.

“You’ve got to be consistent,” says Charles Elson, corporate governance and ethics expert at the University of Delaware. “On the one hand, they took strong positions on certain social issues, with which many in the company might disagree. Yet they punished her for effectively doing the same thing.”

Levi’s spokesman Ancel Martinez, in a statement to NPR, argues Sey’s case was not one of “stifling dissent,” noting that the company had supported Sey’s personal advocacy before.

When some of San Francisco private schools began reopening in late 2020, Sey says she made a pitch for Levi’s to take a stand alongside her: to help San Francisco public schools reopen.

Company leaders turned her down, she says, though it wasn’t acrimonious. She says they argued that Levi’s doesn’t weigh in on local issues, and that advocating for reopening public schools would be unseemly since children of many executives attended private schools.

Levi’s hasn’t commented on this or other specifics of its discussions with Sey.

About a year later, in late 2021, Sey received specific instructions from HR about topics she should leave alone such as the California governor recall vote, vaccine mandates and the motives of pharma companies. She says her public statements in the media and online were regularly tracked and assessed.

For a while, Sey felt her bosses had her back — until they didn’t.

“There was a sense that I’d lost the ability to lead within the organization because so many employees were so upset by the things I had said,” Sey says.

Elson and Reed both say this gets to the heart of the big question: What is the role of today’s corporate leader? Elson argues it’s to make quality goods at decent prices — not wade into politics. But companies are increasingly taking stands on social and political issues, inevitably colliding with the views of some employees.

Reed notes that Sey made the one choice available to a worker on such a collision course: She left. As Sey sees it, she gained the ultimate freedom: to speak freely.