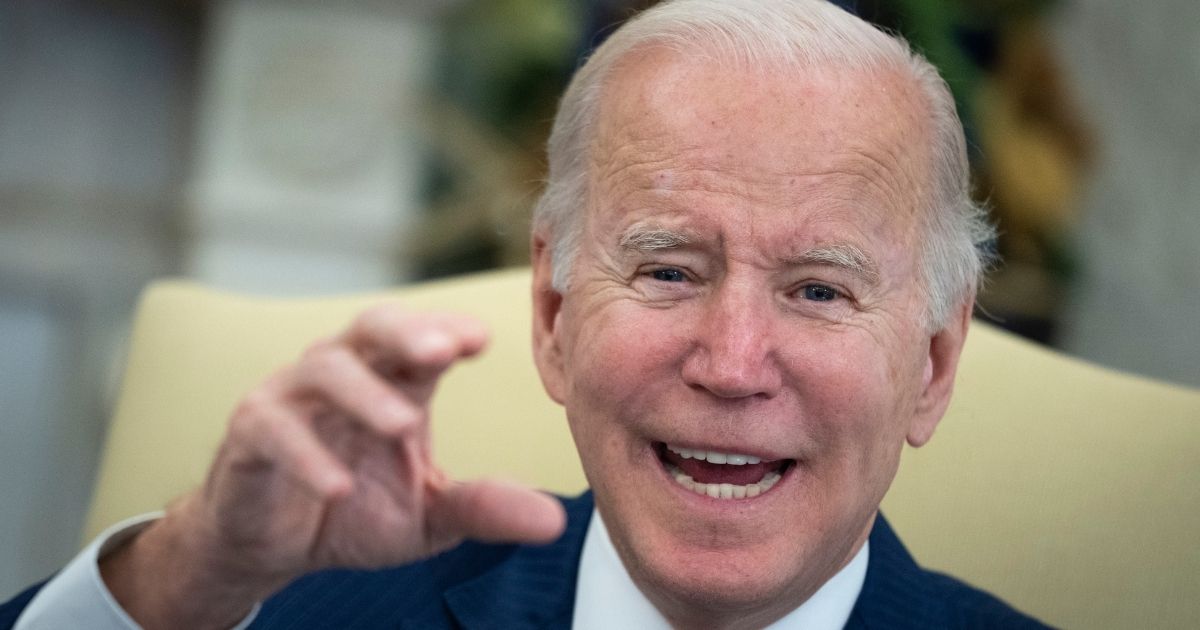 President Joe Biden isn’t exactly known for his eloquence these days, but I’d always attributed his occasional (OK, concerningly frequent) slips of the tongue to his age (he’s 79) and, possibly, cognitive decline.

I have no theories, however, about his frequent use of a word that is not in the English language.

The word is “expodentially.” This is how Biden seemingly pronounces the word “exponentially.”

And no, I’m not talking about once or twice when he had a cold or a touch of hay fever and his “N” sounded slightly like a “D.”

I’m talking about dozens of instances in which he very deliberately and clearly said “expodentially,” which is neither how you pronounce “exponentially” nor a word in its own right.

The conspicuous overuse of this non-word was observed by members of the Republican Party’s media team, as the official @GOP Twitter account shared a video that included numerous examples, back to back, of Biden employing this odd butchering of the English language.

This isn’t one of those videos that’s just a collection of deceptively edited clips to make it look like, say, an apolitical teenager in Kenosha, Wisconsin, who shot three people in self-defense is a scary white supremacist.

Just, you know, to pick a totally random example of how Twitter videos can be deceptively edited.

No, the collection of clips the GOP managed to acquire is jaw-dropping, and the way Biden mispronounces “exponentially” gets, well, exponentially weirder throughout the short clip.

This is not the first time I have asked this question, and I doubt it will be the last: What on earth is going on with Joe Biden?

Typically, we draw attention to his brain freeze moments before the teleprompter or the times he’s forgotten things such as where he is, what office he was running for or the name of the Pentagon, the secretary of defense and the person he picked to fill this Cabinet seat, all at once.

These are all consistent with a man who, at the very least in appearance only, has a hard time staying focused, using a teleprompter and remembering simple information that is highly pertinent to the tasks on hand.

I’ve been suffering from a severe case of mom brain for nearly a decade now and probably forget why I’ve walked into a room or mixed up my kids’ names at least once a day. Of course, I’m not the leader of the free world and I don’t have access to the nuclear codes.

Nonetheless, sure, we could say that just because Biden is alarmingly foggy-brained doesn’t necessarily mean he’s going to blow us all up because he got his video game controller mixed up with the nuclear football.

There’s a whole team of people around him to keep him on track, right?

After all, we know that Biden has expressed a fear that he’ll “get in trouble” if he takes too many questions from reporters.

We know that there are people to write him helpful notes about what’s on his chin when he’s on live TV.

We know that there are plenty of people in the White House’s employ who are not above ushering the septuagenarian president around, particularly when he’s getting dangerously close to the nosy White House press pool.

Is something wrong with Joe Biden?

We even know that there are rumors of a strategy called “The Wall” that Biden staffers use to shield him from those darn intrusive reporters.

So it’s pretty well-established that Biden has handlers, and that they look out for him so as to prevent him from making a fool of himself — at least, they try.

This raises the question — why hasn’t anyone told him that “expodentially” isn’t a word?

This one is actually funny!!

I mean, we all remember how the entire world reacted when President Donald Trump nonsensically included the words “covfefe” and “hamberder” in tweets — the former positively dominated the news cycle for days, if memory serves me.

But Biden consistently uses a word that doesn’t exist and no one bats an eye.