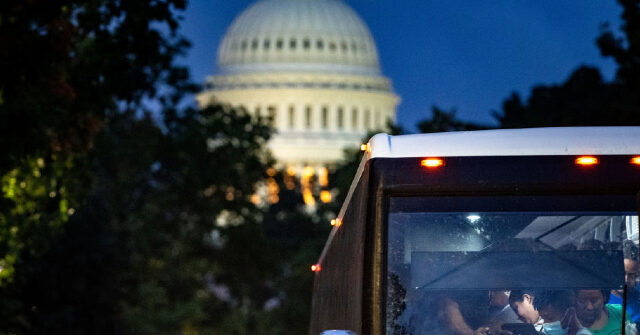 “That lack of coordination wreaks problems in our very efficient processing,” Biden’s border chief told CNN on Thursday. The Cuban-born, pro-migration border chief is Alejandro Mayorkas, and he continued:

These cities have certain capacities …They have the infrastructure to address the needs of migrants, and we need to calibrate the movement of people, according to their capacity and their efficiencies. And that is not being done.

Since 2021, Mayorkas has been using taxpayers’ funding to process economic migrants into a nationwide, multi-city network of nonprofits, legal firms, and transport networks. The network then quickly and quietly moves the migrants from the border to housing and jobs throughout the nation. The New York Times reported on August 20:

“We know their shoe sizes, we know their medical needs, we know their court cases, where their ICE check-ins are,” said Sergio Tupac Uzurin, a volunteer with NYC ICE Watch. “The city wasn’t doing any of that.”

The welcome centers are staffed partly by the city and partly by nonprofits, including Team TLC NYC and Masbia, that provide food, clothing, and other aid.

The money to fund this smuggling network — which includes nighttime flights of migrants into American cities — is pulled from myriad government accounts, including accounts allocated for other tasks by Congress.

So far, Mayorkas and his partners have quietly moved roughly three million people — including roughly one million people who sneaked across the border — to jobs, homes, and government aid throughout the United States.

The rapid distribution network is intended to minimize public awareness of migration, largely by minimizing media coverage of the huge population movement.

Even when invisible on TV, the migration’s massive labor shock is helping to reduce wages for ordinary Americans — and also to spike inflation in housing and auto prices.

Biden is fuelling the migration wave into Americans’ jobs by ignoring the law requiring migrants be detained until asylum cases are decided. https://t.co/TP6wHWbn6T

But the Abbot disruption has forced the pro-migration corporate media in New York and D.C. to publicize the damaging inflow of migrants — and the taxpayer funding that Democrats are lavishing on migrants instead of on Americans.

“Most of America has not really understood the magnitude of the problem that we have on the border until we started sending these buses up to New York,” Abbott told Fox News adding:

This is not a Texas problem. This is an American problem caused by the President of the United States of America. And so many people have been blind to this until suddenly buses of migrants started showing up in their city, which is a sanctuary city, by the way.

In New York, pro-migration advocates are calling for another $50 million to be spent integrating the illegal economic migrants into the city, despite the need of local Americans for better-paid jobs and cheaper housing:

The New York Immigration Coalition Welcoming New York Campaign is an effort to ensure that every asylum seeker who makes it to New York has the services, shelter, and care that they need to not only survive but thrive — and that we use this opportunity to demonstrate to the rest of the country that welcoming immigrants helps strengthen New York.

The group also wants the city to rejig local laws in favor of the migrants, saying the city government must:

Remove the NYPD for their duties of enforcement of [street] vendors

“In Washington, D.C., meanwhile, Delegate Eleanor Holmes Norton is asking for an additional $50 million for the Federal Emergency Management Agency’s Emergency Food and Shelter Program to handle the migrant influx from Texas and Arizona,’ Fox reported on August 24.

It is easier for government officials to grow the economy by immigration than by growing exports, productivity, or the birth rate.

So Washington D.C. deliberately extracts millions of migrants from poor countries and uses them as workers, consumers, and renters.

This extraction migration policy both grows and skews the national economy. It prevents tight labor markets and so it shifts vast wealth from ordinary people to investors, billionaires, and Wall Street. It makes it difficult for ordinary Americans to advance in their careers, get married, raise families, or buy homes.

Extraction Migration slows innovation and shrinks Americans’ productivity, partly because it allows employers to boost stock prices by using stoop labor and disposable workers instead of the American professionals and productivity-boosting technology that would allow Americans to earn more money.

This migration policy also reduces exports by minimizing shareholder pressure on U.S. companies to build up beneficial and complementary trade with people in poor countries.

Migration undermines employees’ workplace rights, and it widens the regional economic gaps between the Democrats’ cheap-labor coastal states and the Republicans’ heartland and southern states.

An economy fueled by extraction migration also drains Americans’ political clout over elites, alienates young people, and radicalizes Americans’ democratic civic culture because it gives an excuse for wealthy elites and progressives to ignore despairing Americans at the bottom of society.

This economic strategy is enthusiastically pushed by progressives who wish to transform the U.S. from a society governed by European-origin civic culture into a progressive-directed empire of competitive, resentful identity groups. “We’re trying to become the first multiracial, multi-ethnic superpower in the world,” Rep. Rohit Khanna (D-CA) told the New York Times in March 2022. “It will be an extraordinary achievement … We will ultimately triumph,” he boasted.

But the progressives’ colonialism-like economic strategy kills many migrants. It exploits the poverty of migrants and splits foreign families as it extracts human resources from poor home countries to serve wealthy U.S. investors.

Progressives hide this extraction migration economic policy behind a wide variety of noble-sounding explanations and theatrical border security programs. Progressives claim the U.S. is a “Nation of Immigrants,” that migration helps migrants, and that the state must renew itself by replacing populations.

Many polls show the public wants to welcome some immigration. But the polls also show deep and broad public opposition to labor migration and the inflow of temporary contract workers into jobs needed by young U.S. graduates.

This “Third Rail” opposition is growing, anti-establishment, multiracial, cross-sex, non-racist, class-based, bipartisan, rational, persistent, and recognizes the solidarity that American citizens owe to one another.