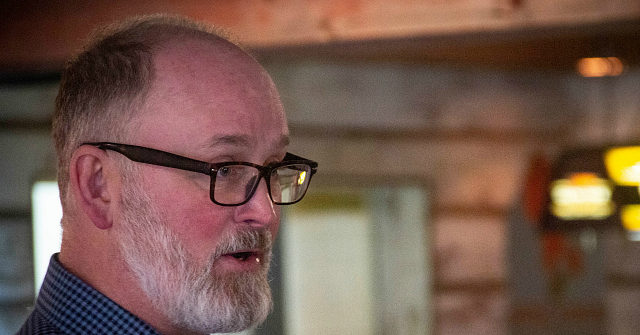 Former Navy SEAL Derrick Van Orden, running as a Republican for Wisconsin’s Third Congressional District’s open seat, told Breitbart News that President Joe Biden has not fulfilled a single campaign promise in his first year in office and instead has been a disaster for America.

Van Orden, endorsed by former President Donald Trump, explained during an appearance on SiriusXM’s Breitbart News Saturday that Biden failed his campaign promises of bringing “decency” and “competence” back to the White House, in addition to ending the coronavirus. At the same time, inflation has reached a 40 year high during his time in office.

“[Biden] said he was going to run to return decency back to the United States government, into the White House, and then he immediately abandoned thousands of American citizens and our allies to their fate to terrorists in Afghanistan. I can’t think of anything less decent than throwing away your own citizens to terrorists in Afghanistan for political expediency,” Van Orden explained when talking about Biden’s botched withdrawal from Afghanistan.

As Biden also campaigned on bringing competence back to the White House, Van Orden added that “in conjunction with [House Speaker] Nancy Pelosi[‘s] radical leftist dem spending in the House… We have the highest inflationary rate in 40 years. This is a direct result of incompetent governance and overspending by the Democrats in the House.”

NATO allies do not trust us.

???? number of Americans still held by terrorists in AFG.

He noted that the supply chain crisis is a “direct result of Biden and [Transporation] Secretary [Pete] Buttigieg” questioning when the last time someone saw the transportation secretary was.

The Republican said that Biden also campaigned on fixing the coronavirus but noted that “There’s been more deaths under Joe Biden’s watch than there was under President Trump’s watch… Trump handed him three vaccines. So across the board, he has completely failed the COVID thing. They’re just throwing darts now against the wall, trying to figure out what to do. He has completely mismanaged this thing.”

Regardless of what you don’t hear in the media, believe your lying eyes; the Biden administration has failed on every front.

The economy, Afghanistan, the border, COVID.

This is indisputably the worst start of any administration in the history of our nation.

Van Orden, running for Wisconsin’s Third Congressional District’s open seat, has previously said that he is ready to run against any of Pelosi’s hand-picked Democrat opponents after his original opponent, Rep. Ron Kind (D-WI), announced his retirement after a slew of scandals were unearthed around him.