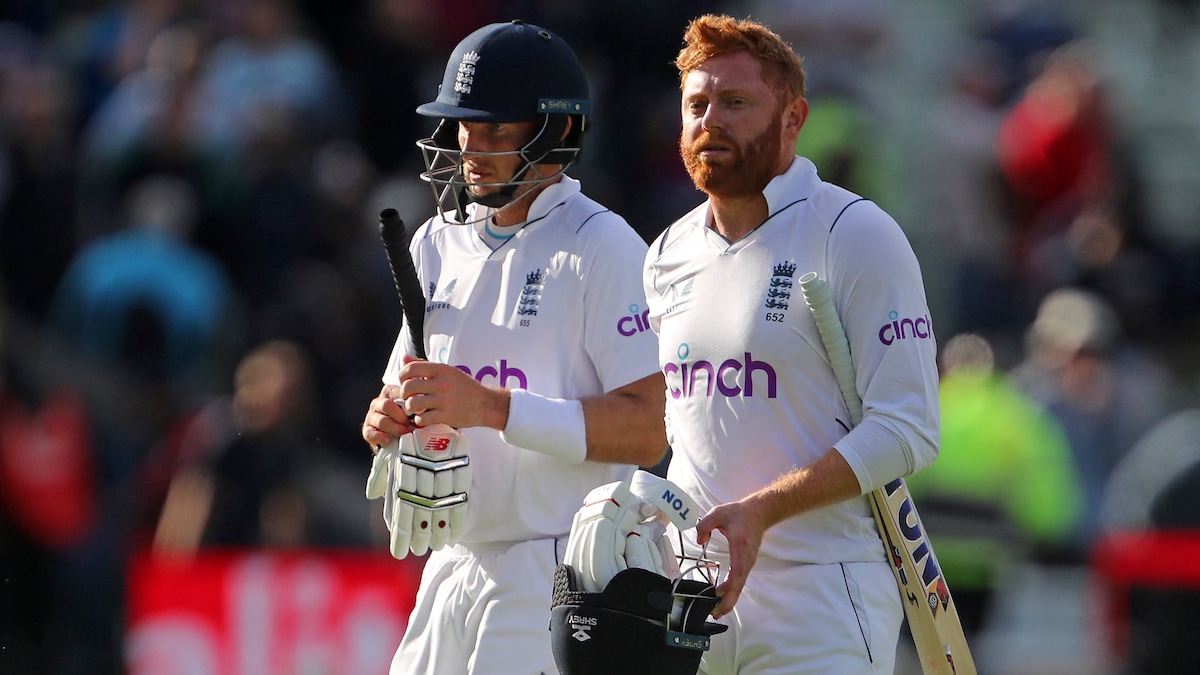 Joe Root and Jonny Bairstow put England on course for a ground-breaking run chase against India despite Jasprit Bumrah‘s brilliance on day four of the rescheduled fifth Test, setting up a fitting series finale in Birmingham on Monday. Skipper Bumrah brought India back in the game with wickets on either side of the lunch break after England openers Alex Lees (56 off 65) and Zak Crawley (46 off 76) finally found form and shared a 107-run stand chasing a record 378-run target. From 107/0, it soon became 109 for three before the dangerous duo of Root (76 batting off 112) and Bairstow (72 batting off 87) frustrated the Indians with a commanding 150-run partnership off just 197 balls.

England were 259 for three at stumps on day four, needing a very gettable 119 runs for a series levelling victory.

Though the wicket did not offer much help, Indian bowlers were unable to maintain pressure on the English batters who played with the aggression that has become hallmark of the Ben Stokes–Brendon McCullum‘s school of cricket.

Bairstow, who is in the form of his life, was dropped on 14 by Hanuma Vihari and he made India pay dearly for it.

With Ben Stokes and Sam Billing still to come, India will need something special to pull off a win from here. India’s bowling performance in the second innings was reminiscent of their struggles in South Africa where they failed to defend target twice after winning the series opener.

India could have made England chase in excess of 400 on day five if it was not for some poor shot selection. After starting the day at 125 for three, India were all out for 245 in the second innings.

India had very little going for themselves in the final session barring with the first two overs. Bumrah had Ollie Pope caught behind before Lees was run out after Root went for a single that was not for the taking.

After that, it was Root and Bairstow show as they scored runs at will.

Under-fire England openers Lees and Crawley had also displayed a lot of positive intent to take England to 107 for one at tea. India managed to get the breakthrough towards the end of session with Bumrah cleaning up Zak Crawley (46 off 76), who misjudged a leave, when a delivery darted in from length.

India could only consume 8.5 overs after lunch. The tail did not wag compared to first innings but specialist batters gifting their wickets away prevented India from getting a lead in excess of 400.

Chasing a record target, England came out all guns blazing and raced to 53 for no loss in nine overs with Lees collecting two fours off Ravindra Jadeja in his very first over. He stepped out of the crease to hit the first one past mid-off while the second came from a reverse sweep.

Crawley got going with a flick towards square leg off Jasprit Bumrah before a crisp straight drive off Mohammad Shami.

Lees got to his second Test fifty in the following over with a classy back foot punch off Mohammad Siraj.

Siraj resorted to bowling with a scrambled seam but that also did not put the openers in any sort of discomfort.

Earlier, India gifted easy wickets to England but Rishabh Pant‘s half-century allowed them to extend their lead to 361 runs by lunch session.

Pujara got going with a back-foot punch and a flick off James Anderson for consecutive boundaries.

Pujara, who had reached the 50-run mark on Sunday, was hardly troubled by the English pacers. Pant and Pujara’s job was made easier with Ben Stokes giving three overs to part-timer Joe Root after start of play.

The Saurashtra batter however contributed to his own downfall by but cutting a short and wide ball off Stuart Broad straight to backward point. It is his pet shot but couldn’t keep it down for a change.

Shreyas Iyer (19 off 26) joined Pant in the middle and after a playing a few shots, fell to the short ball yet again. England laid the trap for Iyer and he fell right into it by pulling a short ball straight to mid-wicket.

Pant completed his fifty with a tickle off the pads, becoming the first Indian wicket-keeper to score a hundred and a half-century in an overseas Test.

After sweeping Jack Leach for a boundary, Pant went for a reverse pull in the following over but was caught at first slip by Joe Root, leaving India at 198 for six.