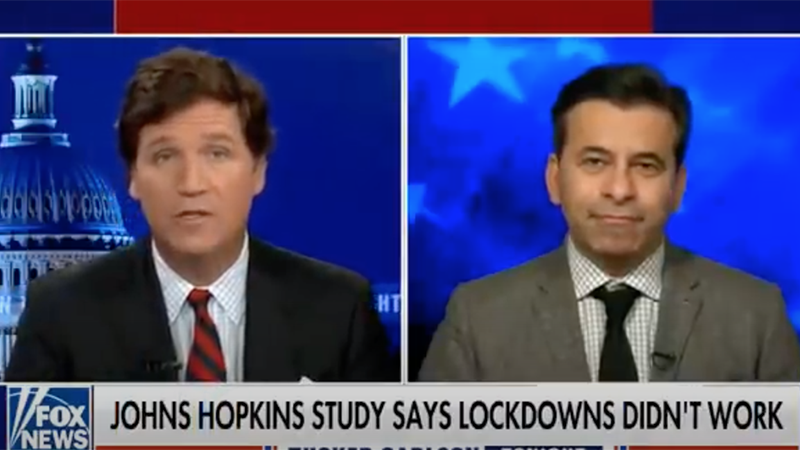 A Johns Hopkins professor slammed his own university and the establishment media for failing to report on a major study that concluded lockdowns have been almost completely ineffective at curbing COVID mortality rates.

As we reported yesterday, the study was authored by multiple eminent researchers at the University and concluded that  lockdowns “are ill-founded and should be rejected as a pandemic policy instrument.”

The authors wrote that “While this meta-analysis concludes that lockdowns have had little to no public health effects, they have imposed enormous economic and social costs where they have been adopted.”

Lockdowns in Europe and the US decreased COVID-19 mortality by a measly 0.2% on average, while the economic costs of lockdowns were enormous. Lars Jonung, @JonasHerby, and I find ZERO evidence to support lockdowns. Take a look.https://t.co/8keJw5n7jG pic.twitter.com/CXj5h8CQ4m

Appearing on Tucker Carlson’s show Wednesday, Johns Hopkins professor of surgery Dr. Martin Makary blasted the college, noting “Johns Hopkins itself did not even put out a press release about this study, and if you look at the media coverage, it’s one of the biggest stories in the world today, and yet certain media outlets have not even covered it.”

Makary urged that the reason for hiding the study is that “people may already have their own narrative written” about the effectiveness of lockdowns.

The professor dug down into the study and noted that it found that the number of lives saved by the lockdowns is infinitesimal compared to those lost through missed cancer diagnosis and treatment alone.

“It was 124,000 excess deaths in year one. So, over two years, it was about a quarter million people who died,” Makary noted.

He added, “I think the public is hungry for honesty and basic humility from public health officials.”

Makary also appeared on Fox Business to discuss the study:

Senator Rand Paul also referred to the new Johns Hopkins study in an appearance Wednesday, noting “I hope we’ll learn from this the study. There was no correlation between any of the mandates the government put in place and any change in the incidence of the disease.”

Paul reminded viewers that Anthony Fauci has repeatedly claimed that lockdowns have saved millions of lives.

“It’s become so politicized that I don’t think Dr. Fauci will ever apologize or admit to the country, but we need to have people like him removed from office because they’ve been so wrong on so much policy,” Paul urged.

Other Republicans commented on the Johns Hopkins study Wednesday.

Sen. Roger Marshall, R-Kansas told reporters “Bad judgment and poor leadership from our nation’s health agencies have caused most Americans to live with an unhealthy fear of COVID-19. There is no doubt, we need a new approach to COVID as we must learn to live with it.”

Marshall echoed Paul, stating “That new approach should not include Dr. Fauci – American’s don’t trust him and he has lost his reputation. We must stop the obsession with COVID, stop living in fear and move forward.”

The latest developments come on the heels of 70 per cent of Americans asserting that it’s time to live with COVID and get on with our lives.