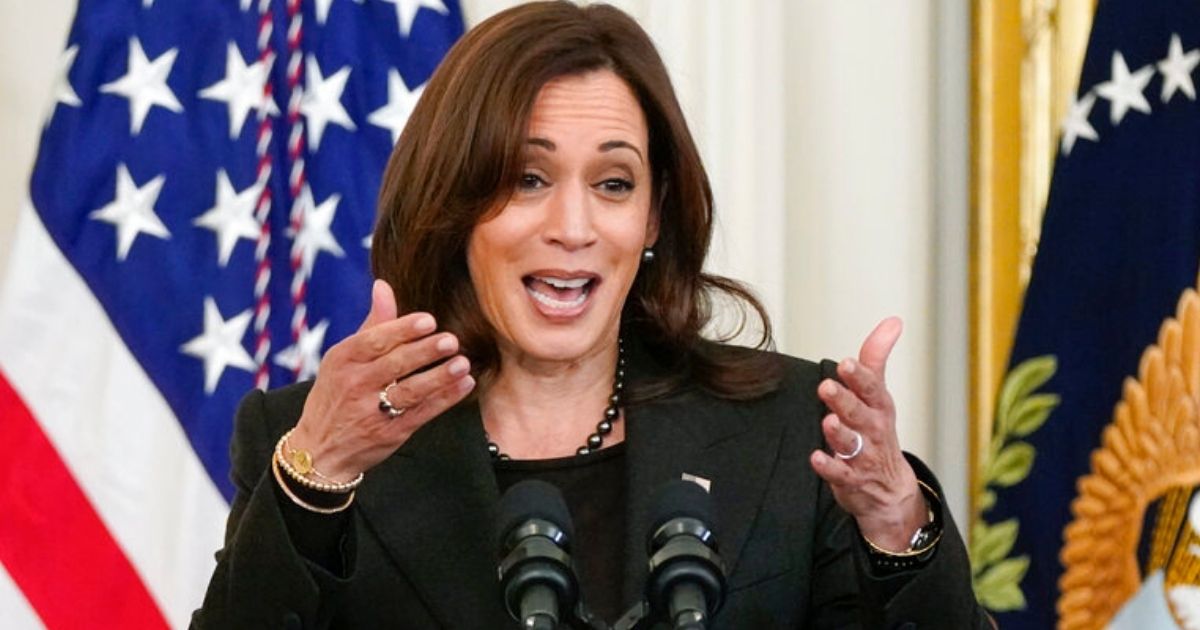 Many have argued the Biden administration’s inability to put forth a strong image may have contributed to Russia’s decision to invade Ukraine. A recent podcast appearance from Vice President Kamala Harris likely won’t do much to quell those criticisms.

Harris joined “The Morning Hustle” radio show on Tuesday, and host Headkrack — primarily known as an authority on Hip-Hop music — asked her to explain the current situation in Ukraine to the audience.

“If you’re watching any level of news, even social media, you’re seeing everything that’s going on right now in the Ukraine,” Headkrack said. “Break it down in layman’s terms for people who don’t understand what’s going on, and how can this directly affect the people of the United States?”

When Headkrack said “layman’s terms,” he seemingly did not realize how patronizing Harris was going to be in her response.

“So, Ukraine is a country in Europe,” Harris said. “It exists next to another country called Russia. Russia is a bigger country. Russia is a powerful country.”

“Ukraine is a country in Europe. It exists next to another country called Russia. Russia is a bigger country.” pic.twitter.com/QYPLJ02mDy

To be fair, Harris is probably used to talking at this level so that President Joe Biden can understand her. But for the average American, the patronizing tone is not going to cut it.

Americans are asking for an explanation of the crisis and a plan to protect our own country, not a third-grade geography lesson. Nonetheless, Harris continued her ridiculous explanation.

Is this an embarrassing look for Harris?

“Russia decided to invade a smaller country called Ukraine,” Harris said. “So basically, that’s wrong, and it goes against everything we stand for.”

Harris then explained the term “sovereignty” and said America would stand with Ukraine.

The tone Harris took in this response was obviously inappropriate for the setting, and there are two probably explanations as to why she did this. First, it is possible Harris is trying to distract from her lack of knowledge about the war between Russia and Ukraine.

By using her time to explain basic terms and geography, Harris effectively avoided having to answer any hard-hitting questions about the conflict.

The second possibility is that Harris actually believes the average American listening to this radio show is so stupid that he needs to hear a third-grade history lesson. In either case, Harris is not displaying any positive leadership qualities.

In addition, there is the implication of what the left likes to call “subtle racism” with Harris’ comments. She was speaking to two black Americans who undoubtedly have a large black audience, and she seemingly felt the need to talk down to them, which would imply she believes they are not smart enough to understand the issues plaguing the country.

Harris did go a little deeper after her initial explanation, but even then, she simply repeated popular White House talking points without actually saying much of substance.

Harris explained the United States had issued sanctions against Russia, which she said were meant to “put a real hurt on their economy.” She failed to mention that sanctions have, at best, mixed results as a means to deter countries from unethical behavior.

Co-host Lore’l pressed Harris on the issue of sanctions. She said Biden claimed the sanctions against Russia were “put in place to prevent anything from happening,” but that Harris said “the opposite.”

“We had sanctions before the actual invasion — we threatened sanctions to hopefully deter Russia from going in,” Harris said. She compared this action to a parent telling a child the potential consequences of their actions in hopes of deterring them from certain behaviors.

“So that’s where we started with the sanctions,” Harris said. “But then when Russia actually went in, we are now implementing the sanctions.”

The fact is that these sanctions have not deterred Russia from entering Ukraine, and they are unlikely to stop further aggression now.

Overall, the interview made Harris sound both patronizing and weak on the world stage. Amid Russia’s aggressive actions and continual shrugging off of U.S. sanctions, it was exactly the opposite of the image the Biden administration needed to project.