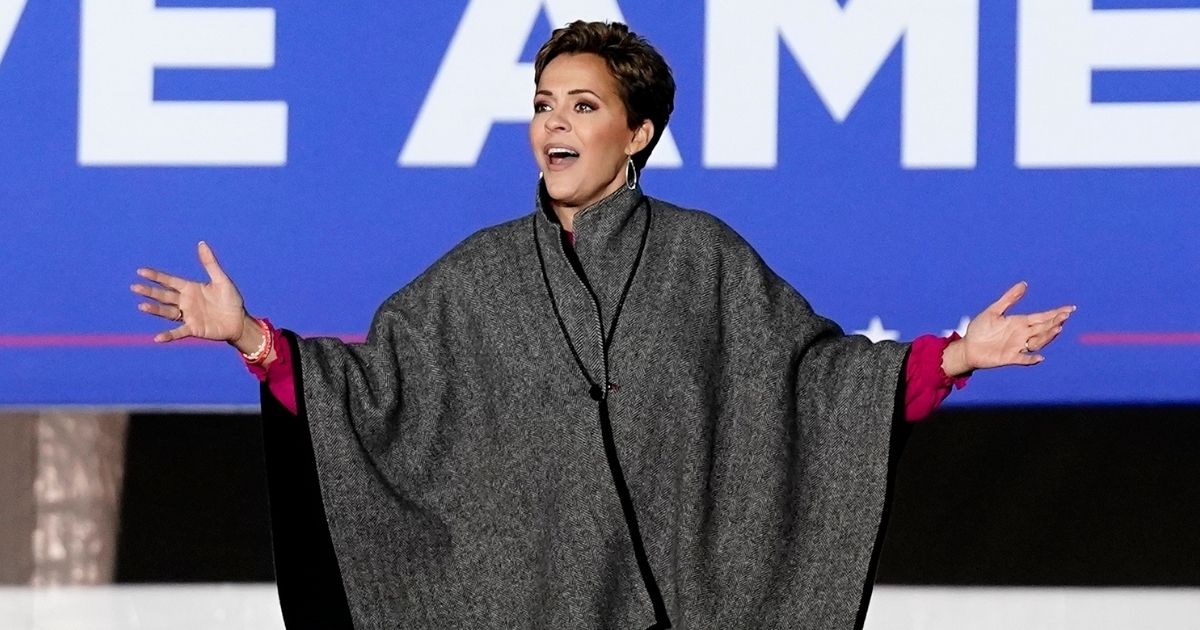 Arizona Republican gubernatorial candidate Kari Lake made a focused ad buy to run only during local news programs in the state — because they are the target.

The GOP frontrunner starts the 60-second spot stating, “I’m Kari Lake, the Trump-endorsed candidate for governor. If you’re watching this ad right now, it means you’re in the middle of watching a fake news program.”

“You know how to know it’s fake? Because they won’t even cover the biggest story out there, the rigged election of 2020,” she continues.

Local media coverage of the Maricopa County, Arizona, audit of the 2020 election was pretty much entirely negative and remained that way throughout.

“And rigged elections have consequences,” Lake says in her ad. “We’re all feeling it. Soaring prices, a spike in homelessness and an invasion on our border. I’m the only candidate with a plan to tackle all of those issues and more.”

“When I’m governor, we’ll finish the wall, and criminals who cross our border will be sent back. We’ll get the homeless out of our parks and off our streets, and no more masks, swabs or shots to go to work or go to school. Our kids will get a real education, not a brainwashing,” she pledges.

Lake concludes, “Now let’s send the corrupt news a lesson and turn them off.”

You might say the candidate followed her own advice last spring when she left her position as news anchor after being with Fox affiliate KSAZ-TV in Phoenix for over 20 years.

The veteran journalist cited frustration with the biased direction the outlet had taken as the reason for her departure.

Earlier this month, Lake effectively flipped the script on an ABC reporter with one of the left’s favorite gotcha questions for Republicans: Do you think Joe Biden is the president?

The reporter followed up by asking if Lake believes the election was stolen — is Biden really the legitimate president?

WATCH: The Media just won’t learn their lesson. They continue to try and stump me, but I know their game better than they do.

I did an interview with @ABC… will they include this portion of it in their piece? Why won’t they just do their job and report the truth? pic.twitter.com/KnDC2jHXVB

At a rally former President Donald Trump held outside of Phoenix last month, Lake called the 2020 race “rotten to its core,” adding, “You don’t steal our vote” and just expect people to accept it.

Lake turned the tables on the ABC reporter, asking, “Do you think that Joe Biden garnered 81 million votes? Do you think the elections were fair?”

Do you think the media has covered allegations of voter fraud in 2020 fairly?

Meanwhile, Georgia Secretary of State Brad Raffensperger confirmed last month that his office was investigating allegations that large-scale illegal ballot harvesting took place during the 2020 general election in his state.

The investigation came in response to complaints filed by True the Vote in November, based on surveillance footage from ballot drop boxes and the geotracking of cellphones during the 2020 election.

The vote integrity organization says on its website it will be releasing “shockingly similar findings” in five additional states.

True the Vote worked with conservative filmmaker Dinesh D’Souza on the upcoming documentary film “2,000 Mules,” which alleges a “coordinated ring of illegal vote harvesting in all the key states where the election was decided.”

The trailer highlights the states of Arizona, Wisconsin, Michigan, Pennsylvania and Georgia as places where this alleged illegal conduct occurred.

Footage from the trailer of an alleged ballot harvester is included in Lake’s ad.

During the ABC News interview, Lake predicted that the American people will eventually get the full story of what happened in the 2020 election.

She noted that outlets like ABC, CNN and MSNBC spun the false narrative that Trump colluded with Russia to steal the election.

“And now they’re doing the opposite. We have evidence of corruption in our election, and they refuse to cover it. They refuse to be honest with the people of this country,” Lake said. “When you’re lying to the people and you’re in media, that’s a bad business model.”

It should be noted that, despite numerous claims of voting irregularities, including affidavits alleging fraud sworn to by reported eyewitnesses, no court has yet ruled that widespread fraud materially affected the results of the 2020 presidential election.

Lake is going bold on the issues that Trump voters care about: fake news, the border, the 2020 election.

The energy, thus far, is with her campaign.

If she should become the nominee, it is likely for many voters the race will be a referendum on Trump versus President Joe Biden. And with Biden’s approval number in the state in the low 30s, Lake’s chances of being Arizona’s 24th governor seem high.