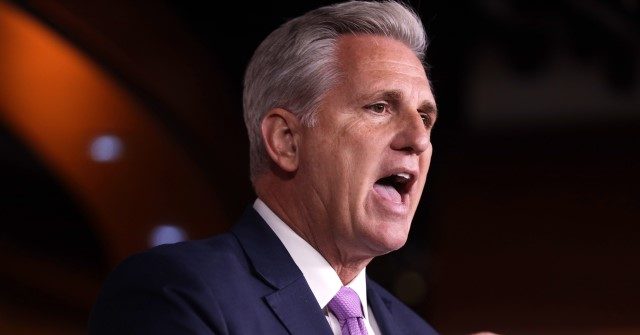 “Diversity of opinion is the lifeblood of our democracy,” McCarthy said in a statement. “And yet that fundamental American value is under assault by Big Tech—entities that have amassed more power and more control over more speech than any other institution in history.” He noted that Big Tech’s decisions to ban a member of Congress and renowned physicians due to their not sharing the same views as the companies have “real world costs.”

“As we get more information on the virus it is clear many of the views once demonized by technology companies and the political elite are turning out to be true,” McCarthy explained, noting the “doctrines of lockdowns, school closures, and the threat of covid-19 illness according to age groups and previous infection are currently being reversed.”

McCarthy said while the censorship is happening to the right, Americans on the political left — including various news hosts, members of Congress, and Vice President Kamala Harris — have “made public comments that are now universally understood to be false. Yet, they face no repercussions from the gatekeepers of America’s town square.”

“It is clear any speech that does not fit Big Tech’s orthodoxy gets muzzled,” McCarthy declared. At the same time, he explained that Democrats, since they get no repercussions from their previous statements, “have shown zero interest in passing laws that will promote a diversity of views” because it does not affect them.

“Big Tech platforms should not be allowed to use the shield of Section 230, which was designed to foster an open internet, to censor first amendment protected free speech,” McCarthy added. “House Republicans will be ready to take action that protects Americans when they express their constitutionally safeguarded views, just like we have laws on the books today that prohibit discrimination by corporations in many other contexts.”

“The American experiment is dependent on the freedom and ability of Americans to express themselves, which Republicans are fighting to preserve,” he said.

McCarthy’s statement comes after Twitter permanently suspended Greene’s personal account over the New Year’s weekend. Breitbart News reported that Twitter did not point to any specific reason or tweet that went against the company’s terms of service, but instead said the ban was set off by “repeated violations of our COVID-19 misinformation policy.”