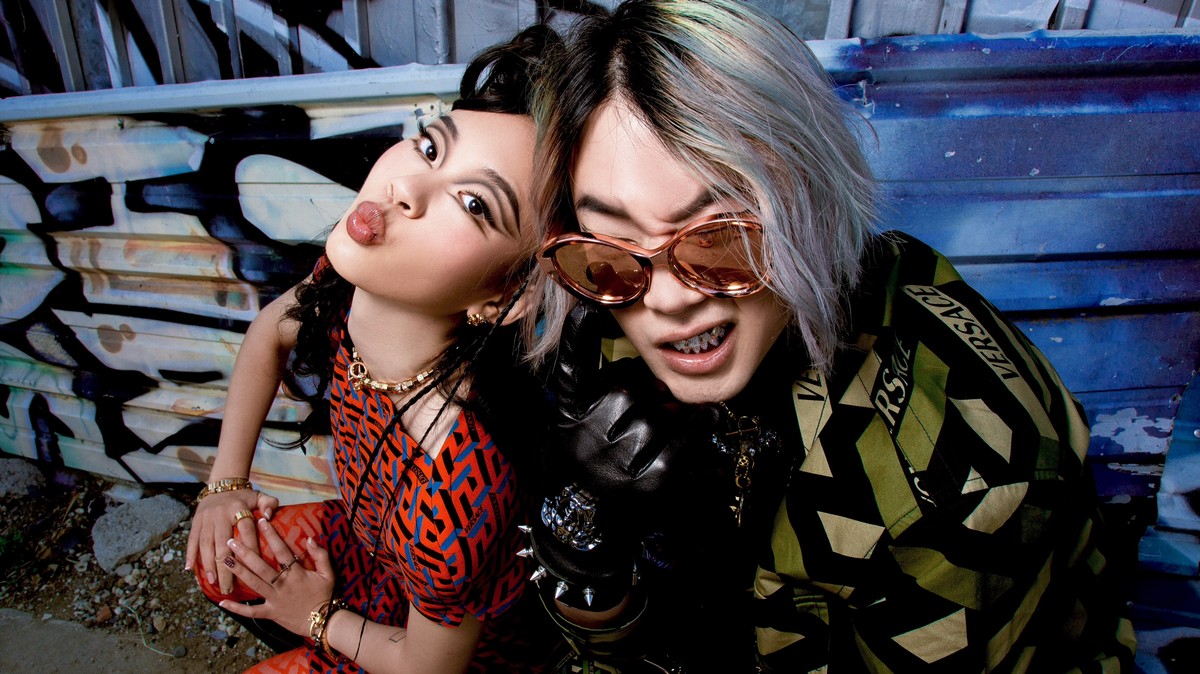 It was midnight in South Korea when Lil Cherry caught up with Noisey to discuss her new album, SPACE TALK. She had just finished another interview, and in global rockstar fashion, she seemed awake, light, and magnetically charged by her busy night.

Lil Cherry and her brother, GOLDBUUDA, who is also her producer and biggest musical collaborator, have patented their own whimsical and rebellious sound somewhere between hip hop, alternative pop, hyperpop, punk, and rap. Their newest creation, SPACE TALK, is a dreamy, glitchy escape from reality with equal measures of gentle, ethereal sounds and headbanging, high-octane moments. Playing the album all the way through is like attending a glamorous, drippy dance party that transforms guests into their celebrity personas, dusting them with confidence and prowess.

“I like to use the word ‘chameleon’ when I think of me and Buuda’s music,” Lil Cherry told Noisey. “We love to experiment and mix and match everything that has influenced us from living in Seoul, Miami, and New York. Everything we create, it starts with a story.”

The “WAMEME” music video was filmed in Los Angeles and directed by hip hop and hyperpop video hitmaker, Speeder. “I’m not super familiar with L.A. yet. I consider myself a Brooklyn girl, a Miami girl, but I definitely don’t have the L.A. girl certification yet,” Lil Cherry said, remembering her hike up to see the Hollywood sign. “Speeder kept saying, ‘We’re almost there!’” she recalled, adding with a laugh: “A lot of sweat went into this video.”

Lil Cherry has a history with wordplay, and her passion before music was poetry, which she studied at NYU’s Gallatin School. Her favorite poem, she said, is “The Emperor of Ice Cream” by Wallace Stevens, which she described as a dark and mystical work. “I studied not only the meaning of words in poetry, but the sound of words,” she said. “I feel like, when it comes to delivering a message, it not only comes from the meaning of the words but the sound of the words, and the sound of the beat, and all of it mashed up together.”

Looking back on how their journey began, Lil Cherry said she was traveling home to South Korea from college on her winter break when she discovered that Buuda had turned his bedroom into a studio. “So when he played me a bunch of his beats and told me to ‘drop a verse,’ I didn’t even understand what a freestyle was, or what he meant,” she said, “but I took out one of the poems I had written for school and added some emotion to it.”

The first song Lil Cherry and Buuda made together turned into the sticky, confident summer bop, “Motorola.”  Lil Cherry’s instinctive flow combined her poetry skills with the fact that she was freestyling alongside Buuda, her lifelong friend and collaborator in chaos.

“Buuda is five years older than me,” she said. “Growing up. I remember I would ask Buuda to play hide and seek with me multiple times, every day.” She described Buuda as a good sport who made time to entertain his younger sister. “I remember one time, it was Buuda’s turn to hide… so, after I’m done counting, I run to Buuda’s room, and he’s not there,” Lil Cherry remembered. “As soon as I was about to leave the room, I spy, in the corner of my eye, a slither of Buuda, outside on top of the balcony on the second floor, climbing with his arms stretched up, hanging on the rooftop railing, and I remember thinking, ‘Okay, dude, you won.’”

In the present day, the duo still carry that sense of mischief and curiosity in the music they make together and in every element of their art. “Looking back, I think Buuda used to surprise me a lot, so perhaps from Buuda I learned how to think outside of the box and live outside the box,” Lil Cherry said.

The dramatic and detailed music videos for her songs “Cat Walk” (featuring Rico Nasty), “G!,” and “PYE LIFE” are products of Lil Cherry’s love for experimenting with style and theatrics. “Delivering energy is what I do through music,” she said. She uses words like “alien” to describe the way her art was perceived when she first started releasing music, and she seemed charmed by that description. To her ears, the word “unusual” has a nice ring to it.

As for what is next up for Lil Cherry, she said that “we’ll have to find out together.” “I’m full of surprises,” she added. “I don’t even know what I’m going to do tomorrow, so it will be a surprise for me, too! I hope that there is a lot of dancing involved.”