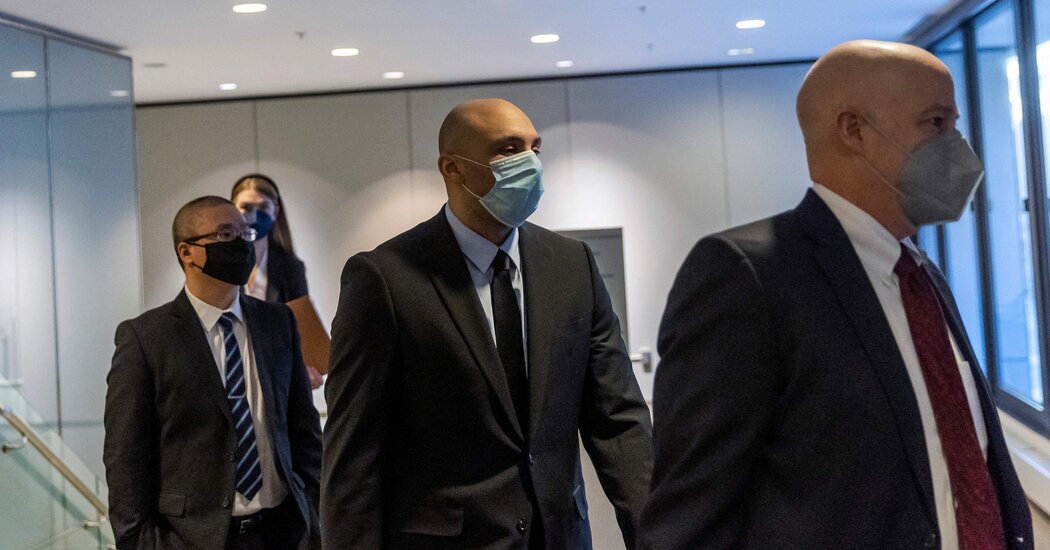 ST. PAUL, Minn. — A former Minneapolis police officer who kept bystanders away from George Floyd and another who helped pin Mr. Floyd down as he struggled to breathe were each sentenced to several years in prison on Wednesday. The sentences mean that all four of the officers who were involved in Mr. Floyd’s death are to serve prison time.

A federal judge sentenced the two former officers, Tou Thao and J. Alexander Kueng, after a jury convicted them earlier this year of violating Mr. Floyd’s rights by failing to provide medical aid and by failing to intervene as another officer, Derek Chauvin, pressed his knee on Mr. Floyd’s neck for more than nine minutes.

Judge Paul Magnuson sentenced Mr. Thao, who kept a crowd of people away from Mr. Floyd, to three and a half years in prison, and Mr. Kueng, who helped hold Mr. Floyd down, to three years. The judge noted that Mr. Thao was the more experienced officer — he had been with the force since 2008 — while Mr. Kueng was a rookie officer.

The death of Mr. Floyd, a 46-year-old Black man, prompted protests against police abuse and racism across the country in the spring and summer of 2020 that were joined by millions of Americans.

Mr. Thao, 36, who is Asian American, and Mr. Kueng, 28, who is Black, each still face state charges of aiding and abetting both manslaughter and murder. They are scheduled to be tried in January on those charges.

Four defendants. Along with Mr. Chauvin, three other officers were accused of playing a role in Mr. Floyd’s death. Tou Thao, a veteran officer who was Mr. Chauvin’s partner, held back a group of bystanders. J. Alexander Kueng and Thomas Lane helped pin down Mr. Floyd. The four men have been involved in several proceedings.

Mr. Kueng was next to Mr. Chauvin for much of the encounter, and placed his knee on Mr. Floyd for several minutes as Mr. Floyd, pinned facedown on the pavement, begged for air and eventually lost consciousness. He and Mr. Chauvin also rebuffed the fourth officer, Thomas Lane, who asked twice if they should roll Mr. Floyd onto his side, which would probably have made it easier for him to breathe. Mr. Thao stood behind the police car and ordered bystanders back onto a sidewalk as they shouted that Mr. Floyd was in distress.

Judge Magnuson, who has overseen the federal case against the four officers involved in Mr. Floyd’s death — all of whom were fired — handed down the sentences in a federal courthouse in St. Paul.

Prosecutors said at the hearing that Mr. Kueng had not tried to aid Mr. Floyd once he lost consciousness, and that Mr. Keung deserved a “serious penalty,” even though he had not intended for Mr. Floyd to die. Before Mr. Thao was sentenced, the prosecutors said that even a 9-year-old girl who was standing nearby had recognized that Mr. Floyd was suffering and that Mr. Thao should have as well.

Mr. Thao addressed the court at length, reading several passages from the Bible over more than 30 minutes. Mr. Kueng did not speak at his sentencing. The two men were the last of the four former officers to be sentenced.

A state jury convicted Mr. Chauvin, 46, who is white, of murder last year, and he was sentenced to 21 years in prison after also pleading guilty to federal charges of violating Mr. Floyd’s rights.

Mr. Lane, 39, who is white and who helped to restrain Mr. Floyd by holding his legs, pleaded guilty both to a federal charge of violating Mr. Floyd’s rights and to state charges of aiding and abetting second-degree manslaughter. Last week he received a federal sentence of two and a half years in prison; he is scheduled to be sentenced in the state case in September.

At Mr. Lane’s sentencing hearing last week, a brother and a nephew of Mr. Floyd urged the judge to impose the maximum sentence and said afterward that they felt insulted and frustrated that the prison term for Mr. Lane was not longer.

The brother and nephew did not speak at the hearings for Mr. Kueng and Mr. Thao on Wednesday; a distant cousin of Mr. Floyd urged the judge to hand down the maximum sentence in their cases.

Judge Magnuson ordered Mr. Kueng and Mr. Thao to begin serving their prison terms in October, as he also had with Mr. Lane.

On May 25, 2020, the day of Mr. Floyd’s death, the four Minneapolis police officers went to a South Minneapolis street corner after a clerk at a convenience store there called 911 to report that Mr. Floyd had used a counterfeit $20 bill to buy cigarettes. When they arrived and tried to place Mr. Floyd in the back of a police car, he struggled with them, saying he was claustrophobic and was having trouble breathing.

Video taken by a bystander outside the store, showing officers pinning Mr. Floyd face down on the pavement, fighting for breath, ricocheted around the world and set off protests against police violence and racial injustice.