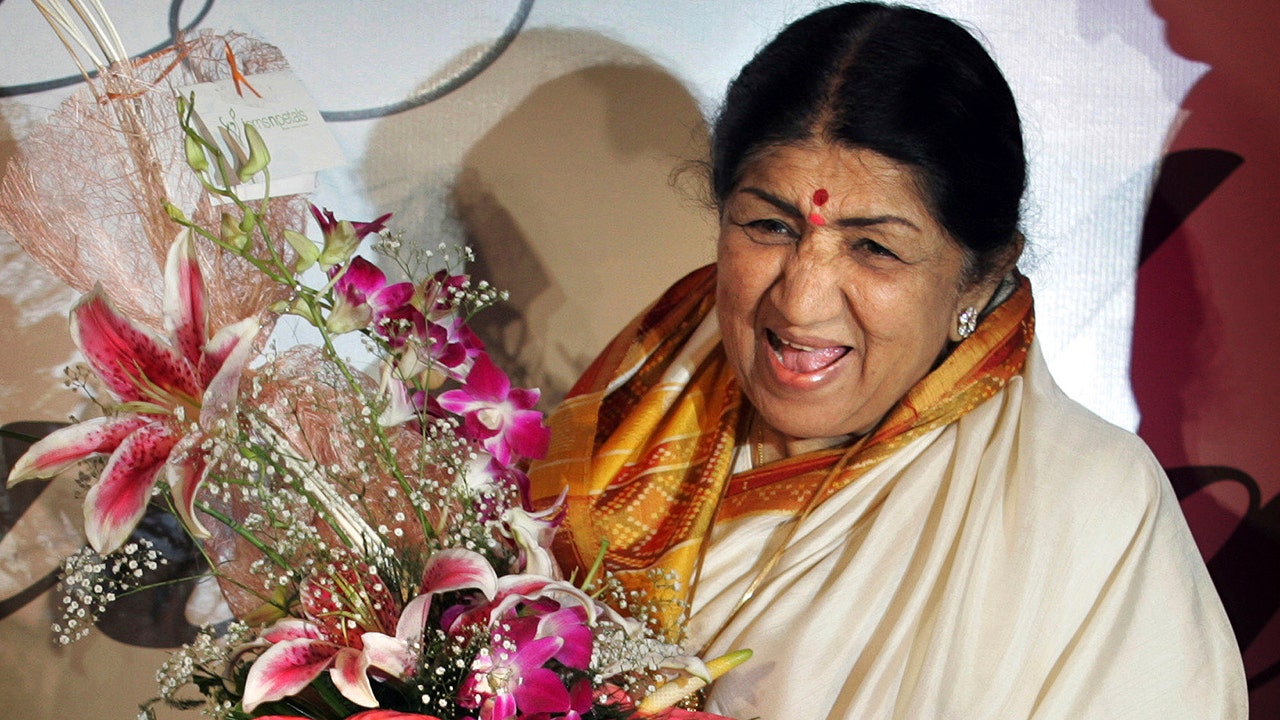 Lata Mangeshkar, a legendary Indian singer with a prolific, groundbreaking catalog and a voice recognized by more than a billion people in South Asia, has died. She was 92.

The iconic singer died Sunday morning of multiple organ failure at Breach Candy hospital in Mumbai, her physician, Dr. Pratit Samdani, told reporters. She was hospitalized on Jan. 11 after contracting COVID-19. She was taken off the ventilator after her condition improved in late January but her health deteriorated on Saturday and was put back on life support.

Mangeshkar received a state funeral and Prime Minister Narendra Modi flew in from New Delhi to pay his last respects.

Modi laid a wreath next to Mangeshkar’s body, wrapped in the Indian flag, as thousands, including Bollywood stars and politicians, thronged Mumbai’s iconic Shivaji Park where she was cremated amid the chanting of vedic hymns and a special gun salute.

India’s public broadcaster, Doordarshan, transmitted live scenes of the cremation to a grieving nation while Mangeshkar’s songs played in the background.

The body of Lata Mangeshkar, is taken for funeral procession outside her house in Mumbai, India, Sunday, Feb.6, 2022. The legendary Indian singer with a prolific, groundbreaking catalog and a voice recognized by a billion people in South Asia, died Sunday morning of multiple organ failure. She was 92.
(AP Photo/Rafiq Maqbool)

Condolence messages poured in immediately after Mangeshkar’s death was announced.

“I am anguished beyond words,” Modi said in a tweet. “She leaves a void in our nation that cannot be filled. The coming generations will remember her as a stalwart of Indian culture, whose melodious voice had an unparalleled ability to mesmerize people.”

Over the course of nearly eight decades, Mangeshkar was a major presence as a playback singer, singing songs that were later lip-synced by actors in India’s lavish Bollywood musicals. She was also fondly revered as the “Melody Queen” and “Nightingale of India.”

Mangeshkar’s songs, always filled with emotion, were often sad and mostly dealt with unrequited love, but others involved national pride and were used to motivate Indians and the country’s defense forces during times of wars with neighboring Pakistan and China.

Born in Maharashtra on Sept. 28, 1929, Mangeshkar first sang at religious gatherings with her father, who was also a trained singer. After she moved to Mumbai, India’s film industry capital, she became a star with immensely popular appeal, enchanting audiences with her smooth but sharp voice and immortalizing Hindi music for decades to come.

Few musicians defined versatility like Mangeshkar, who issued her debut song in 1942 for a Bollywood film when she was just 13. Soon after, she became an icon of Hindi singing, lending her voice to over 5,000 songs in over a thousand Bollywood and regional language films. She sang for Bollywood’s earliest women superstars like Madhubala and Meena Kumari and later went on to give voice to modern divas like Priyanka Chopra.

Mangeshkar was still in her 20s when she had already been established as one of the best playback singers in India. But her career-defining moment came in the epic historical “Mughal-e-Azam,” a romantic tragedy that was released in 1960. Its soundtrack “Pyar Kiya To Darna Kya?” (Why fear if you are in love?) is considered one of the most memorable in Bollywood films, one that over decades has become an undisputed epitome of love’s often rebellious nature.

Throughout her career, Mangeshkar worked with nearly all legendary Indian music directors, including Madan Mohan, Naushad, S.D. Burman, R.D. Burman, the duo Laxmikant-Pyarelal and A.R. Rahman, selling tens of millions of records. She also won dozens of singing awards, earning her a near saint-like status in the Bollywood music industry.

“I can’t believe I’ve been tolerated by music lovers for 75 years!” she said last year in an interview with the news website Rediff.

Mangeshkar’s popularity extended far beyond India. She was celebrated not only in neighboring Pakistan and Bangladesh but also in some Western countries.

The body of Lata Mangeshkar, is taken for funeral procession outside her house in Mumbai, India, Sunday, Feb.6, 2022. The legendary Indian singer with a prolific, groundbreaking catalog and a voice recognized by a billion people in South Asia, died Sunday morning of multiple organ failure. She was 92.
(AP Photo/Rafiq Maqbool)

In December, Mangeshkar commemorated eight decades of her debut on radio.

She wrote on Twitter in Hindi: “On 16 December 1941, I sang two songs for the first time in the studio for radio after seeking the blessings of my parents. It has been 80 years today. In these 80 years, I have got immense love and blessings from the people. I believe that I will always keep getting your love and blessings.”

Mangeshkar never married. She is survived by four siblings, all accomplished singers and musicians.