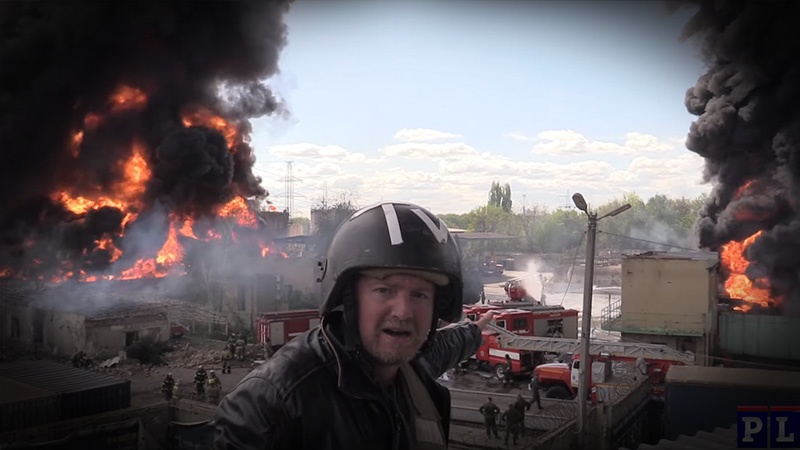 Independent journalists in Ukraine document the daily lives of citizens who have been in the midst of a deadly war for months now.

American reporter and military veteran Patrick Lancaster posted a video to YouTube on Wednesday showing the aftermath of a rocket that hit a school building in the Donetsk region.

The trajectory of the blast appears as if the shell was launched from Ukrainian territory at what the Ukraine Armed Forces knew was a school.

The school’s principal confirmed the missile was launched from UAF-controlled territory and said their drones fly over all the time, so they know what they’re aiming at.

Overall, the administrator said she was unsure if they were firing at civilian targets on purpose, on accident or as return fire.

Lancaster’s second report from Wednesday captured the scene as firefighters worked on putting out a massive blaze that began after either a Ukrainian artillery or rocket attack hit a major oil plant in another town outside Donetsk.

A man who works at the plant reluctantly told Lancaster it was likely the Ukrainian military that shelled the location, asking, “Who else could shell?”

Citizens are afraid to speak out against the Ukraine government because they could be rounded up by a militarized police force and hauled to jail for up to fifteen years.

Multiple workers said there is no way the UAF could have mistook the plant for a military facility, and one man said he didn’t know why they bomb their own people.

“Maybe they want to destroy everything until nothing is left, the infrastructure. Maybe to leave people without jobs,” the local man hypothesized.

British independent journalist Graham Phillips released a report on Saturday highlighting some of the destruction in the city of Mariupol.

Phillips was able to capture some astonishing views of the city and of the Azovstal Steel Plant where the last remnants of the neo-Nazi Azov Batallion have been holed-up for months.

On Monday, the British journalist walked through Mariupol and filmed as explosions rang out in the background and deceased soldiers lay on the ground.

Phillips filmed as his group handed out food and supplies to the suffering people of the city.

Footage Phillips captured Monday-Wednesday shows the Azovstal Steel Plant from one of the closest vantage points seen so far.

The journalist and cameraman risked being targeted by Azov snipers to get the footage.

Another disrespectful display by the UAF came this week when dead Russian soldiers were arranged into the shape of the letter Z after Ukraine recaptured a previously Russian-held territory.

As mainstream media ignores the destruction of the Donbas region and war crimes committed in the area by the UAF, Infowars, other alternative media outlets and brave journalists like Lancaster and Phillips are exposing the humanitarian crisis.

Alex Jones details Nazi-like tactics adopted by Ukrainian President Zelensky after he declared martial law once the war broke out.