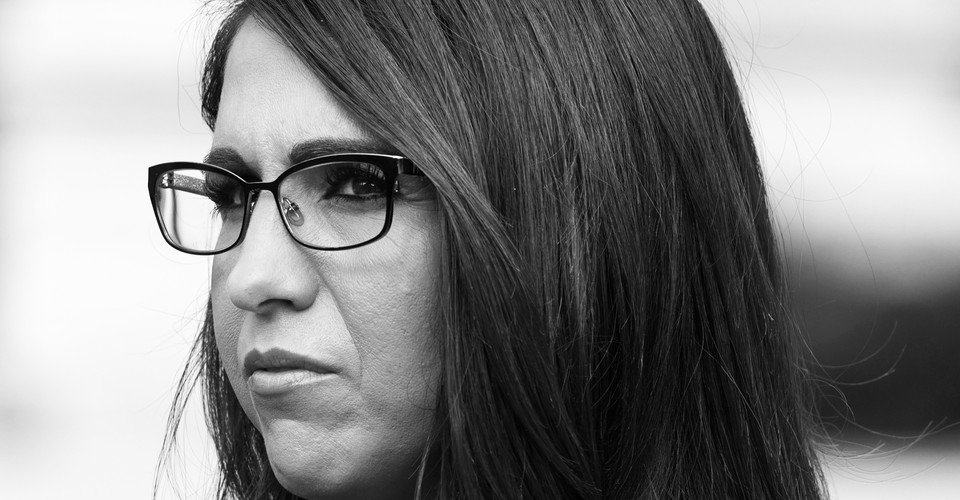 As families around the country prepare to send out Christmas cards with letters and photos commemorating the year gone by, many elected officials do the same. Representative Thomas Massie of Kentucky tweeted one such family picture on Saturday, featuring himself and his clan armed to the teeth on a leather love seat, a merry tree glittering in the backdrop. Massie’s photo drew some ire. Not to be outdone, Representative Lauren Boebert of Colorado, dropped her own Christmas-themed gun portrait today. “The Boeberts have your six, @RepThomasMassie!” Boebert tweeted. “No spare ammo for you, though.”

(No spare ammo for you, though) pic.twitter.com/EnDYuXaHDF

Mowing down your enemies with extreme prejudice probably doesn’t feel like a fair approximation of the Christmas spirit, but neither are these photos much related to the season. They are what they are, and they’ve done what they were meant to do: bother liberals. I don’t take Massie or Boebert to be anything other than a troll—at this point, I take very little political rhetoric to be much other than trolling—but their trolling is poignant, not as an intended provocation, but as a marker of the passage of time.

Read: Growing up with guns

Boebert’s and Massie’s photos suggest that we have moved past the point of a kind of firearm respectability politics. Here, the very meaning of guns is to make liberals hysterical; liberal hysteria is no longer an obstacle to good policy making or even an irritating by-product of the democratic process, but rather the desired outcome of almost all right-wing political rhetoric. It doesn’t matter if the guns make sense for sport shooting, collecting, hunting, or any other plausible pastime beyond killing people or putting pictures on the internet. Their owners don’t intend any confusion on that point. Being photographed for the internet is their raison d’être. If they were just typical-looking guns with potentially reasonable uses kept in a safe, how would they make liberals cry?

I’m not triggered, as it were, by the mere sight of guns. And I tend toward the belief that there are so many guns in circulation and so risibly few politicians demonstrably invested in taking any kind of action on even meek and meager changes to gun policy that there’s not much point in talking about it anymore. Our own politicians are celebrating guns at Christmas mere days after a school shooting precipitated by the purchase of a handgun for the perpetrator as—yes—a Christmas gift. America armed its civilians with so many guns that it conquered itself. I guess this is defeat.

I just remember that it wasn’t always this way. Even in my own short lifetime it was different. I was born and raised in Texas, as was every generation of my family as far back as we know, except the branch from Louisiana, who were just as well armed as the rest. My great-grandparents—farmers, all—had guns; my grandparents had guns; my parents have guns. None of these people were what I would describe as liberal, though I’ve heard, over the years, of pockets of warm feeling toward Franklin D. Roosevelt for how he handled the Dust Bowl and the aftermath of the Great Depression. And none of them seemed much enamored with their guns.

The guns were tools. My maternal grandfather, an Air Force mechanic from Childress, Texas, who enlisted at age 17, had a bolt-action kit gun that he used for hunting rabbits and squirrels, which he fed, once dressed, to his younger siblings; he later bought a German Luger picked off a dead Nazi from a friend in the service, and treasured it for many years. Toward the end, he purchased a nickel-plated .32 for my grandmother after a burglary; it was never fired. My father inherited his grandfather’s 16-gauge shotgun, part of a hunting set the man had dispersed among his grandsons once they came of age. In his younger days, he took deer throughout the hill country of Texas and Colorado. All my life, that gun—a beautiful piece of work, with floral engraving along the stock—lay under my parents’ bed, in plain sight. My first recollection about it is that I should not ever touch it.

Dad told us the only reason to hold a gun was to use it, and the only reason to point it at someone was to kill them. He told us that you only thought you knew whether it was loaded; he told us stories of people who were sure their guns were unloaded—and then. He told us that rifles were for hunting (in our own Texas domicile, he shot a mating pair of raccoon that had moved into the attic, a handful of opossums, and even, preposterously, a rat) and that handguns and assault weapons were for killing people. I knew that he kept the shotgun around for home defense as well as vermin, but there was never a need for it. And I don’t think that disappointed him.

These people never took photos with their guns. They came from an older world, before guns became props in a culture war with real casualties, when they were still needful tools in a wild country. I remember the way they treated their guns, and their universe seems so distant from the one we live in now. My dad used to say: “This isn’t for play; this isn’t a toy.” But what else do you call something that you put into the hands of a little child at Christmas?