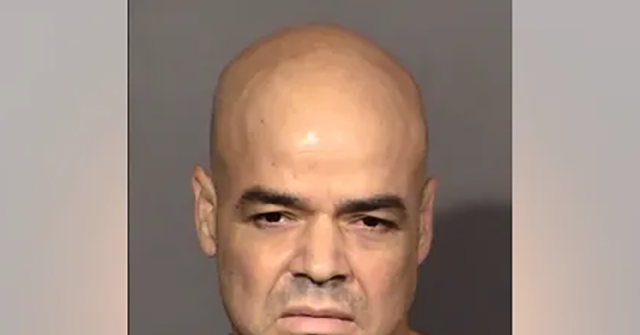 A Democrat official in Clark County, Nevada, was arrested on suspicion of murdering Las Vegas Journal-Review investigative reporter Jeff German — but instead of asking questions about the case, a reporter asked about President Donald Trump’s supposed “normalization of violence against journalists.”

Clark County Sheriff and Republican Gubernatorial candidate Joe Lombardo, whom Trump endorsed in the race to snag Gov. Steve Sisolak’s (D) seat, was taking questions at a press conference on Thursday about the case when Dana Gentry with the Nevada Current asked him if he “condemns” the former president.

“Now is probably not the appropriate time to talk politics but do you condemn —” Gentry began, before Lombardo replied, “So why are we talking politics then?”

“Do you condemn former President Trump’s normalization of violence against journalists?” Gentry continued.

Lombardo said the case press conference was “an inappropriate venue to speculate on that or opine on that.”

Jeff German, host of “Mobbed Up,” poses with Planet Hollywood, formerly the Aladdin, in the background on the Strip in Las Vegas, Wednesday, June 2, 2021. (K.M. Cannon/Las Vegas Review-Journal via AP)

“I think it needs to be stated and noted that it is troublesome because it is a journalist, and we expect journalism to be open and transparent and a watchdog for government. And when people take it upon themselves to create harm associated with that profession, I think it’s very important that we put all eyes on and address the case appropriately, such as we did in this case with the expediency associated with it, ” he continued, before moving on to other questions.

Clark County Public Administrator Robert Telles was booked in Clark County Detention Center for suspicion of murder after German, 69, was found dead outside his home with multiple stab wounds last Saturday. Authorities alleged Telles had self-inflicted stab wounds when he was arrested following a “standoff with SWAT at his home,” ABC News reported.

German had recently run investigative reports exposing corruption about Telles, whom Sisolak appointed in 2019 to the state’s newly created Board of Indigent Defense Services. Telles, 45, lost his reelection bid after German’s findings were published, and German had also recently filed public records requests for emails and text messages between Telles and other county officials.

Reporter: Now is probably not the appropriate time to talk politics…but here’s a question about Donald Trump

The alleged killer is a Democrat appointee of Democrat Gov Steve Sisolak…yet this is the question thrown at Sheriff Lombardo at a law enforcement briefing 🙄🙄🙄 https://t.co/W9twAOcVtD

Republican Governors Association (RGA) Communications Director Jesse Hunt slammed the reporter for trying to pin responsibility on Trump for a crime allegedly committed by a Democrat official who was appointed by a Democrat governor.

“The alleged killer is a Democrat appointee of Democrat Gov Steve Sisolak…yet this is the question thrown at Sheriff Lombardo at a law enforcement briefing,” Hunt tweeted on Friday.

Donald Trump Jr. also responded to a clip of the press conference and denounced the “leftwing media” for trying to involve his father.

A Democrat politician allegedly murders a reporter and the leftwing media tries to blame Trump.

These people are sick in the head. https://t.co/p50pzwtMRm

“A Democrat politician allegedly murders a reporter and the leftwing media tries to blame Trump. These people are sick in the head,” Trump Jr. responded.

Statement from Nevada @GovSisolak about developments in the Jeff German homicide investigation: “No matter who is responsible – elected official or not – they should be held accountable for their actions,” he said. @LasVegasSun pic.twitter.com/LQV8O4pf1x

“No matter who is responsible — elected official or not — they should be held accountable for their actions, and we hope the family will be able to begin the mourning process,” Sisolak said in part.