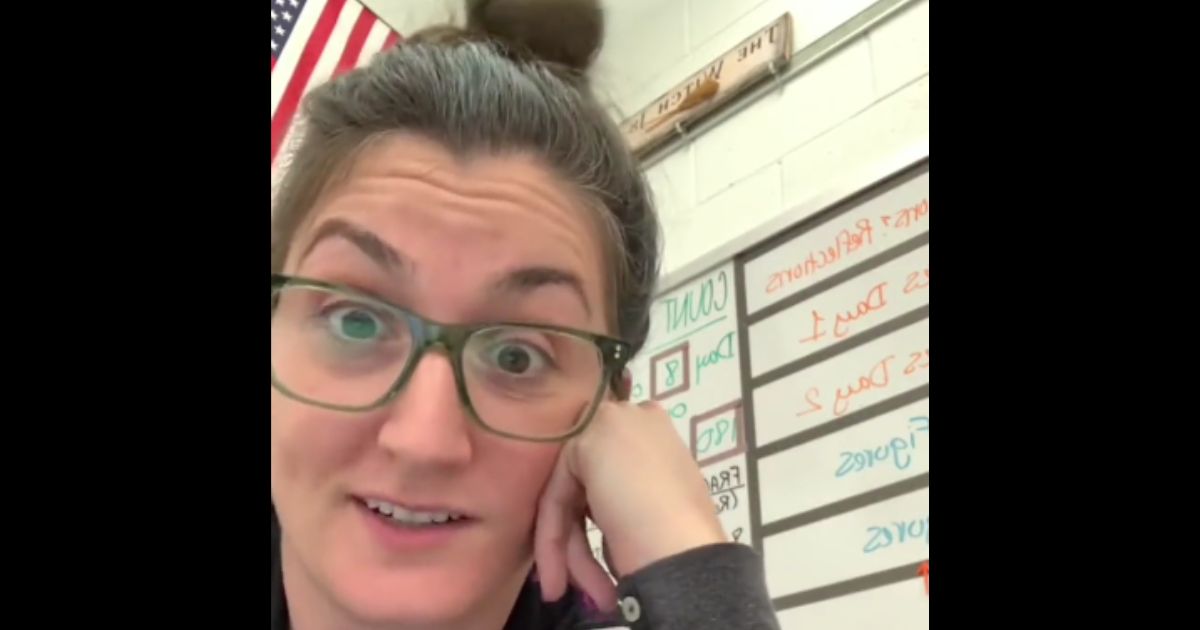 A woke Illinois middle school teacher recently admitted that she routinely lies to parents about what she is teaching children in a video that should not only act as a warning to parents, but also as a road map to eliminating this dangerous, anti-American leftism that is so pervasive in our public school systems.

The teacher’s name was not made public, but according to the Post Millennial, she is a member of the faculty at Troy Middle School in Plainfield, Illinois, a town about 40 miles southwest of Chicago.

In her self-congratulatory video, the smug leftist went on and on about how she purposefully excludes parents from being informed when students claim to be “transgender.”

Constantly grinning from ear to ear, the teacher told her social media audience, “I respect their name and their pronouns, and I use them in class, but because their parents don’t know — I even say this to the students — I say, ‘I’m gonna have to use your legal name and pronouns when addressing your parents, okay?’ And this usually, again, strengthens the bond, the trust bond between me and the kid.”

Before we go on, note that last bit about “strengthening the bond” between her and the kids. This is evidence that she is purposefully driving a wedge between parents and kids and attempting to eliminate parental influence in education.

US Citizen Imprisoned in China to Be Executed After Losing Appeal

This teacher at @troymidschool explains that she tells students that she keep a secret from their parents and that it “strengthens the trust bond between [her] and the kid.” pic.twitter.com/vpPrqvLZKZ

The teacher egoistically begins her video by saying, “I may or may not have ruffled some feathers in today’s team meeting.”

“So here’s the situation. We’ve got kids that are trans, in our classrooms, and they are feeling safe enough around us,” she continues grinning like the Cheshire Cat. “And there’s a particular student that has been brought up in team meetings. And the reason being is because their parents do not know that they are trans.”

Do you think that public schools need an overhaul?

Notice how she goes from “we have trans kids” to only talking about one such kid. This leads to the suspicion that the school doesn’t really have multiple trans kids but only one.

The teacher then added that she threw in her “two cents” in the meeting on dealing with transgenderism in the classroom which caused the meeting to get “a little heated.”

“Should it matter to us what we call students as long as they’re learning, right?” she claims she told another teacher at the meeting. The teacher next said she “respects” a child’s new trans names and pronouns, “and I use them in class,” and then went into the point posted above about how she excludes the parents from knowing about what she is doing in the classroom.

Despite her woke suggestions, though, it appears that the other teachers and administrators in the meeting were not as enamored with the hardcore trans agenda this woman was pushing on little kids.

She then added, “The take was [from a parent’s point of view], if my kid asks you to use a different name and pronouns and then you don’t tell me you’re not honest with me, you don’t tell me that that’s what they’re doing. And they’ve told you that I don’t know. I would be pissed.”

But this desire for parents having to be told what is going on with their children disgusted the teacher and she scolded parents for not “affirming” a pre-teen child’s claim to being transgender.

This leftist commissar began wrapping up her video by equating herself to medical doctors. “I abide by the same oath a doctor takes. Do no harm,” she bloviated in a vainglorious manner.

This behavior is not isolated to one Chicago-area school, to be sure. It is a nationwide trend that is showing up, all across the country.

At the end of her video, though, this woke teacher did say something that just might give sane people some hope.

The teacher glumly noted that one of her leaders said, “Hey, there might be a law that comes down that says eventually you could get sued for doing that.”

And on a note that might make the parents of her students cheer with delight, the teacher concluded saying that if such a law is ever passed, “Well, that will be the day that I exit teaching.”

The sooner the better, I’d say.

Still, this is the perfect path toward eliminating this garbage. Sue them. Sue them. And sue them again until this dangerous behavior by woke teachers ends, and teachers like this one begin to “exit teaching.”

Once precedents are set that affirm teachers have no right to eliminate parents from education, the better it will be for the nation’s children who will finally be able to get back to learning instead of being subjected to left-wing indoctrination.

This teacher did reveal the rot infesting our public schools. But she also helped us see a way toward surgically removing it.