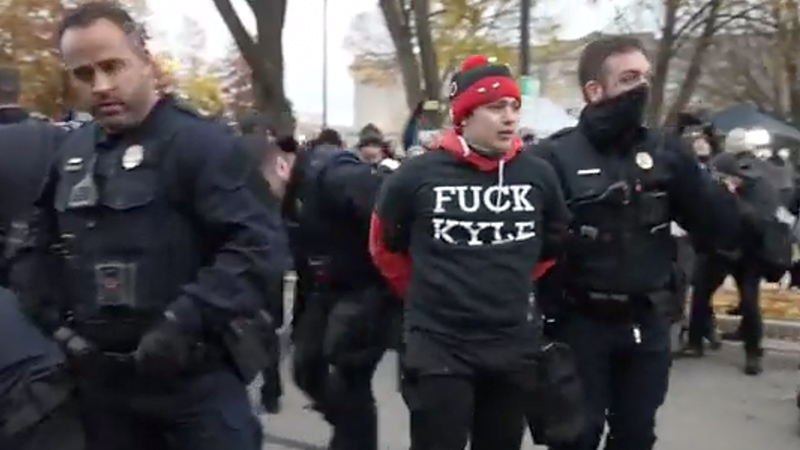 Demonstrators gathered outside the Kenosha, Wisconsin courthouse where the Kyle Rittenhouse trial is taking place have already started to clash ahead of the jury’s verdict.

In one clip, an anti-Rittenhouse protester can be seen throwing a water bottle at a woman following a brief verbal dispute.

After attacking the woman, the liberal man’s friend tried to take the woman’s sign and a scuffle broke out.

Following the skirmish, the raging leftist assaulted press members who were recording the scene.

The unruly individual was arrested by police along with several others.

Another video shows a different young man pouring Gatorade on the head of a woman who was arguing with BLM supporters.

After dumping the sugary liquid on the lady, the guy ran like a coward.

Sadly, the mayhem broke out not long after a pro-Rittenhouse demonstrator brought pizza to share with the anti-Rittenhouse group in what was essentially a peace offering.

The 12-juror panel has finished for the day and will resume deliberating at 10 a.m. ET Thursday morning.

These minor altercations are nothing compared to what’s coming if Kyle Rittenhouse is rightfully acquitted.