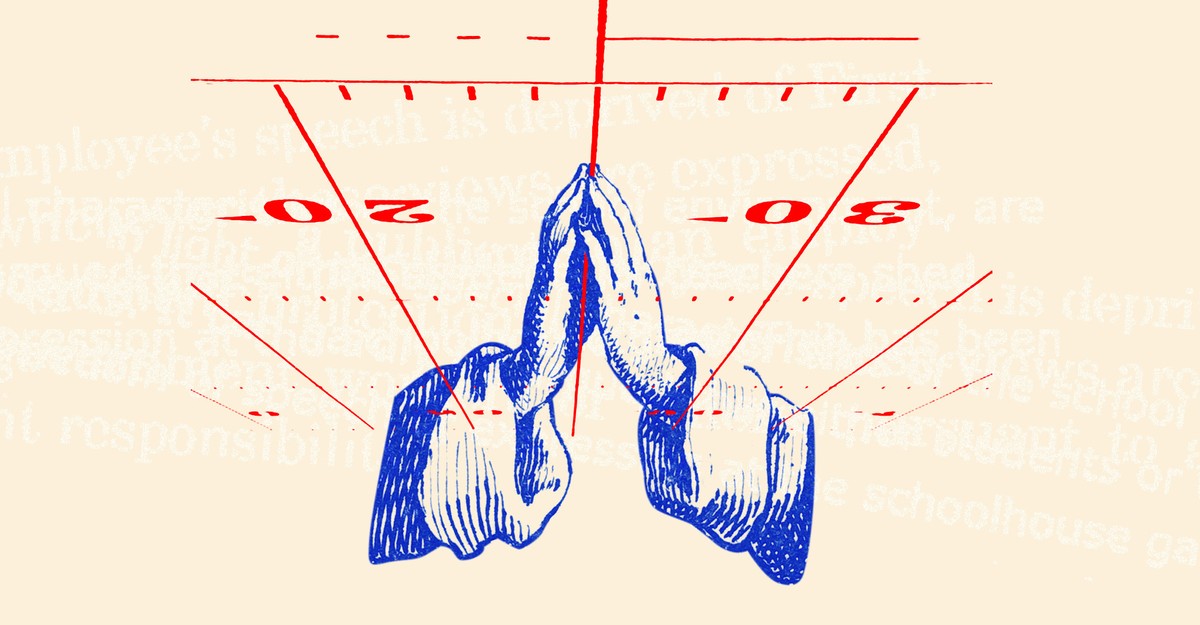 Sign up for David’s newsletter, The Third Rail, here.

Few legal doctrines are contributing more to the culture war than the idea that America’s public-school teachers have no meaningful free-speech rights when they’re at work. The notion that teachers exist as mere agents of state expression—speaking only state-approved words—is dramatically escalating the stakes of the most pitched conflicts in American life, including political and legal fights over expansive anti–critical race theory legislation, laws governing instruction about LGBTQ issues, and rules and regulations mandating preferred-pronoun usage.

And that’s why Americans of any or no faith should hope that the Supreme Court permits a coach named Joseph Kennedy to pray on the field after football games. The case isn’t mainly about prayer. Rather, it’s about the extent to which the state treats public-school teachers as citizens or entirely as subjects under government control during every meaningful moment on the clock.

On Monday, the Supreme Court heard oral arguments in a case called Kennedy v. Bremerton School District, in which a Christian public-school football coach argued that he has a First Amendment–protected right (under both the free-speech and free-exercise clauses) to pray by himself, audibly, on the field after football games.

His school district disagrees, in part because Kennedy used to lead prayers on the field; in part because students, fans, and opposing players have joined in prayer with him; and primarily because the school wishes to uphold what it perceives to be its duties under the establishment clause of the First Amendment to avoid showing favoritism for religion generally or Kennedy’s Christianity specifically.

Central to the dispute are two competing principles articulated in two different Supreme Court cases. In the 1969 case Tinker v. Des Moines Independent Community School District, the Court wrote one of the most famous sentences in the history of free speech in America: “It can hardly be argued that either students or teachers shed their constitutional rights to freedom of speech or expression at the schoolhouse gate.”

Though Tinker was a student-speech case (involving students who wore black armbands to protest the Vietnam War), the inclusion of teachers was meaningful and relatively uncontroversial. Of course teachers enjoy some degree of free-speech rights in schools. But how much?

In 2006, the Court decided a case called Garcetti v. Ceballos and brought the hammer down on public-employee speech. Richard Ceballos, a prosecutor in the Los Angeles district attorney’s office, sued his employer, claiming that he’d faced unconstitutional retaliation for objecting to the prosecution’s tactics in a case and cooperating with the defense.

The Supreme Court rejected his claim, holding that speech by public employees is protected only if they’re speaking as private citizens, not when they “make statements pursuant to their official duties.” But there was an interesting carve-out. The Court refused to extend its holding to “speech related to scholarship or teaching.”

This was confusing. The Court didn’t explicitly protect teaching, but it didn’t explicitly not protect teaching either. It punted the issue to the lower courts, and now, more than 15 years later, those courts have reached a rough consensus: College professors enjoy free-speech rights when speaking as educators; public-school teachers generally do not. Thus, for a public-school teacher to win a First Amendment case, they generally have to prove that their speech at work was personal, not professional.

Combine a doctrine that deprives teachers of any freedom in their teaching with a school district that declares that virtually any public speech at school is professional and not personal, and you create a legal environment that treats teachers as pure instruments of state expression, required to spout only state-approved ideas from the moment they walk onto campus until the moment they leave. Tinker’s declaration that teachers don’t shed their freedom of speech at the schoolhouse gate is drained of meaning, a relic of liberty lost.

During oral argument earlier this week, Justice Clarence Thomas asked the school district’s attorney a question that demonstrated the extent of the government’s effort to control teachers’ speech: “If the coach, instead of taking a knee for prayer, took a knee during the national anthem because of moral opposition to racism … how would your school district respond? Would that be a Garcetti—would that be government speech?”

The counsel answered that yes, a public display on the field during the national anthem would be government speech.

There are clear constitutional interests in exposing students to teachers’ personal speech. In Island Trees School District v. Pico—a 1982 case that placed constitutional limits on the ability of a school district to remove books from its libraries—the Court observed that public education “prepares students for active and effective participation in the pluralistic, often contentious society in which they will soon be adult members.”

A vision of public education that walls off students from their teachers’ personal expression doesn’t prepare them for pluralism. It does precisely the opposite. It teaches them that majorities can and should control speech, and that the remedy for exposure to offensive ideas is an appeal to state authority to quash personal expression.

This is the fruit of Garcetti in public schools. The alternative to an expansive reading of Garcetti isn’t a free-for-all, with teachers saying whatever they want to say to students, regardless of age or subject matter. But on a spectrum that ranges from “all speech is permitted” to “no speech is free,” the present case law for America’s schoolteachers is overweighted toward censorship.

Coach Kennedy’s case represents an opportunity to adjust that balance. I don’t expect the Court to overrule Garcetti, but I do expect that it will grant greater latitude for teachers to engage in private speech, even on school grounds and when “on duty” during school events.

Teachers are state employees, but they are not the state’s robots. When they clearly speak on their own, the First Amendment should apply. Whether they kneel in prayer or protest, it’s not just acceptable for students and parents to see teachers as people and citizens; it’s imperative. The best way to teach pluralism is to model pluralism. Let Coach Kennedy pray, for all our sakes.