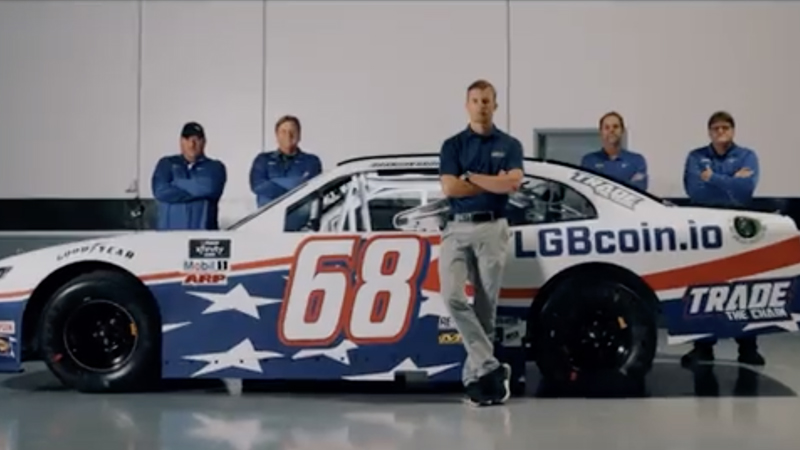 A newly minted anti-Joe Biden meme cryptocurrency has become the official sponsor of the man behind the “Let’s Go Brandon” slogan.

NASCAR driver Brandon Brown announced Thursday that he will be sponsored by the Let’s Go Brandon Coin (LGBcoin.io) in the 2022 season.

“The partnership marks the latest crypto outfit to back a NASCAR driver and team, a growing trend not only in motorsports but across all professional sports leagues. In 2022, BMS driver Brandon Brown will sport an eye-catching red, white, and blue livery with the logo and wordmark of LGBcoin aboard his No. 68 Chevrolet Camaro for all 33 races of the NXS season,” Brandonbilt Motorsports said in a statement.

“LGBcoin is a new, decentralized meme cryptocurrency similar to other meme coins and tokens such as Dogecoin and Shiba Inu, that has achieved a market capitalization of more than $300 million in less than six months. The patriotic coin dubbed ‘America’s Coin’ aims to inspire positivity and unity, grounded in a strong belief of the American dream.”

Brown himself said the LGBcoin.io sponsorship allows him to be “as competitive as possible” and is a good follow-up to becoming an “unintentional meme.”

“Having the financial support of LGBcoin is incredible, especially at such a pivotal time in our team’s growth as we work to build to the next level of competition,” said Brown.

I’m excited to welcome @LGBcoin_io aboard my No. 68 Chevrolet Camaro as our 2022 NASCAR Xfinity Series full season primary partner!

“From wondering if we would have the financial means to continue to compete, to my first major win (at Talladega no less), to becoming an unintentional meme, this past season was a rollercoaster. The support of sponsors like LGBcoin empowers us to be as competitive as possible and I’m looking forward to competing hard on the track in 2022.”

LGBCoin.io HODLer and founder of Typhoon Capital Management James Koutoulas said he’s “proud” to partner with Brown because he embodies the “American story of success and perseverance.”

“We are thrilled to partner with Brandonbilt Motorsports and Brandon Brown for the 2022 NASCAR Xfinity Series season,” said Koutoulas.

“Brandon is not only an incredibly talented driver, but also a thoughtful individual wise beyond his years. His commitment and singular focus on his profession is inspiring and his personal story is one that we can all be proud of—an American story of success and perseverance. Brandon is truly America’s Driver.”

“We are proud to support Brandon this season, to help him continue his American dream,” Koutoulas added. “If we do our job right, when you think of us, and you hear, ‘Let’s Go Brandon,’ you’ll think and feel, ‘Let’s Go America.’”

“Let’s Go Brandon” has since exploded into one of the most popular anti-establishment rallying cries in U.S. political history.

For example, this past Christmas Eve, former police officer Jared Schmeck actually got Joe Biden to say “Let’s Go Brandon” during a conference call, prompting fierce backlash from the media and Democrats, who called the slogan itself an act of “insurrection.”

“‘Let’s Go Brandon’ encompasses the entirety of our frustration with Joe Biden, the administration, the leftist mob, the cancel culture, the mainstream media – they’re the ones who made this a thing,” Schmeck explained Monday.

How long before the left calls this NASCAR sponsorship an act of insurrection?