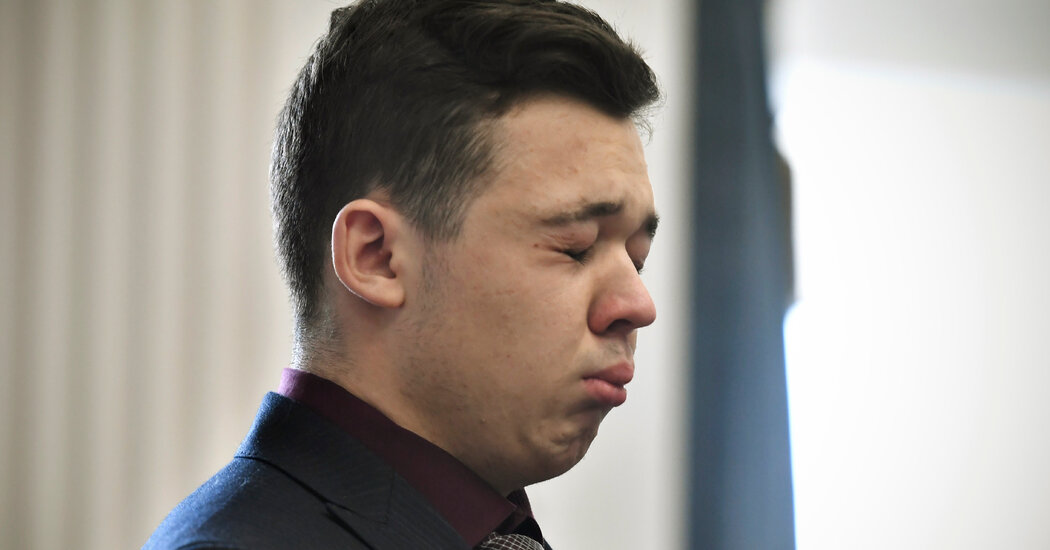 KENOSHA, Wis. — Kyle Rittenhouse, who fatally shot two men and wounded another amid protests and rioting over police conduct in Kenosha, Wis., was found not guilty of homicide and other charges on Friday, in a deeply divisive case that ignited a national debate over vigilantism, gun rights and the definition of self-defense.

After about 26 hours of deliberation, a jury appeared to accept Mr. Rittenhouse’s explanation that he had acted reasonably to defend himself in an unruly and turbulent scene in August 2020, days after a white police officer shot Jacob Blake, a Black resident, during a summer of unrest following the murder of George Floyd by a Minneapolis police officer.

Mr. Rittenhouse, 18, sobbed and was held by his lawyers after the jury finished reading their verdict.

After the shootings, Mr. Rittenhouse was transformed from an unknown 17-year-old from rural Illinois into a symbol. Some Americans were horrified by the images of a teenager toting a powerful semiautomatic rifle on a city street during racial justice demonstrations, a reminder of the extent of open carry laws in the United States. Others saw a well-meaning young man who had gone to keep the peace and provide medical aid, a response to the sometimes violent protests that had roiled American cities in the summer of 2020.

“So many people look at this case and they see what they want to see,” Thomas Binger, the prosecutor in the trial, had cautioned jurors before they began deliberations. The trial had grown so politicized that conservative groups raised money for Mr. Rittenhouse’s defense, and small factions of protesters — including gun rights’ supporters and racial justice demonstrators — had awaited the verdict on the courthouse steps.

As the verdict was read, Mr. Rittenhouse’s mother and sisters cried, and friends and family of the men Mr. Rittenhouse shot clutched each other. Outside, quiet gave way to shouts from supporters of Mr. Rittenhouse. Gov. Tony Evers had prepared for any unrest after the verdict by authorizing 500 Wisconsin Army National Guard troops.

On Aug. 25, 2020, Mr. Rittenhouse arrived in downtown Kenosha with his rifle and a medical kit on the third day of civil unrest over the shooting of Mr. Blake by Officer Rusten Sheskey in the former factory town of 100,000 residents. (In January, prosecutors announced they were not charging Officer Sheskey with wrongdoing.) Demonstrators marched peacefully at points, but some smashed streetlamps and set cars and shops on fire. Law enforcement was overwhelmed, and dozens of civilians took up their own firearms to guard businesses and subdivisions, adding to a tense and chaotic atmosphere that included sparring between the groups.

Testimony and video footage shown during the two-week trial revealed that Mr. Rittenhouse was chased into a parking lot, at one point, by Joseph Rosenbaum, 36, who was unarmed and behaving erratically. Mr. Rittenhouse turned and shot him at close range, killing Mr. Rosenbaum, who had been living in Kenosha.

Mr. Rittenhouse then shot two other people — Anthony Huber and Gaige Grosskreutz — who pursued Mr. Rittenhouse as he fled, testimony showed. Mr. Grosskreutz, a medic from the Milwaukee suburbs, survived and testified at the trial, saying that he had pulled out a gun because he believed that Mr. Rittenhouse was an active shooter. Mr. Huber, who was 26 and had been protesting the shooting of Mr. Blake — a longtime friend — died after a gunshot to the chest.

Over the course of the trial, prosecutors sought to portray Mr. Rittenhouse, a former resident of Antioch, Ill., as an instigator who had behaved with criminal recklessness, inserting himself into a volatile scene of demonstrators and then firing his gun with little provocation.

There was chaos that night in Kenosha, Mr. Binger the prosecutor, told the jury in his opening statement. But “the only one who killed anyone,” he said, “was the defendant, Kyle Rittenhouse.”

At the heart of the case, though, was a fight over what acts qualify as self-defense. Wisconsin law allows deadly force to be used if a person “reasonably believes that such force is necessary to prevent imminent death or great bodily harm to himself or herself,” and in the state there is no duty to retreat before using force.

The prosecution struggled to undermine Mr. Rittenhouse’s central defense: that he had feared for his life when he was chased by Mr. Rosenbaum, a man who had been captured on video throughout the evening shouting threats and racial epithets and — according to Mr. Rittenhouse and a witness called by the prosecution — had promised to kill Mr. Rittenhouse if he found him alone. Mr. Rosenbaum had been released that day from a hospital where he had received psychiatric care and was treated for bipolar disorder and depression, testimony showed.

It was Mr. Rosenbaum, a defense lawyer, Mark Richards, said in his opening statement, who “lit the fuse” that night, “trying to take Kyle’s weapon from him to use against him.”

Still, in testimony, some people who had observed Mr. Rosenbaum, who was 5-foot-4, downplayed the danger that they perceived from him that night. Jason Lackowski, a former Marine and resident of Green Bay, Wis., who said he had traveled to Kenosha with a gun, knife and other weapons to “come down and help in any way we could, to protect local property” in the city, testified that he saw Mr. Rosenbaum as “a babbling idiot.”

Perhaps the closest witness to the encounter was Richie McGinniss, a videographer for The Daily Caller, a prosecution witness whose testimony was helpful in establishing a crucial detail for the defense: He said Mr. Rosenbaum had reached for the barrel of Mr. Rittenhouse’s rifle just before Mr. Rittenhouse fired.

“It was clear to me it was a situation where it was likely something dangerous was going to happen, be it Mr. Rosenbaum grabbing it or Mr. Rittenhouse shooting it,” Mr. McGinniss said on the stand.

Mr. McGinniss also became emotional in the courtroom as he described the trauma of the shootings and his fear when he realized he might have been struck by a bullet. After hearing the gunshots only feet away, Mr. McGinniss said, he stamped his legs on the ground to make sure that he had not been wounded.

The trial, which took place in the courthouse in Kenosha that was shuttered and heavily barricaded during the unrest in August 2020, was marked by angry clashes over judicial procedure between the judge and lawyers, particularly the prosecutor, Mr. Binger.

Last week, the defense moved for a mistrial, suggesting that Mr. Binger — who had introduced questions on a topic that the judge had previously said was off-limits — was intentionally sabotaging the trial to avoid an acquittal.

Judge Schroeder, the longest-serving circuit court judge in Wisconsin, insisted that he wanted to keep politics out of his courtroom, scolding a prospective juror during jury selection who declared that his belief in the Second Amendment made him biased in favor of Mr. Rittenhouse. But the judge also drew attention on Veterans Day for the unusual step of prompting the jury to applaud a defense witness — a veteran — and for periodically launching into meandering asides for the jury on legal theory, Roman history and the Bible.

Jurors heard from dozens of witnesses, including women close to the men who had been shot dead; other armed people who had joined Mr. Rittenhouse on Kenosha streets that night; and witnesses who had livestreamed the shootings. In the most closely watched day of the trial, Mr. Rittenhouse testified in his own defense.

His testimony began on an emotional note: He burst into tears as he recalled the night of the shootings, prompting the judge to call a recess. But for most of Mr. Rittenhouse’s time on the witness stand, he delivered a calm account, saying that he had brought a gun to downtown Kenosha for protection, did not plan to fire it and only did so when he feared for his life.

Mr. Grosskreutz, the only survivor of Mr. Rittenhouse’s gunshots, described the chaotic scene on the stand after he heard the first several shots ring out. Mr. Grosskreutz testified that he ran in the direction of the gunfire, determined to help people who had been injured. Within moments, he encountered Mr. Rittenhouse, fleeing down the street holding his rifle, and began to follow in his direction, holding a pistol Mr. Grosskreutz had brought.

When Mr. Huber gave chase and swung a skateboard at Mr. Rittenhouse’s head, Mr. Rittenhouse shot Mr. Huber in the chest. Mr. Grosskreutz continued to approach, he said in his testimony, first with his gun pointed in the air, then in the direction of Mr. Rittenhouse.

“I was never trying to kill the defendant,” he said. “In that moment, I was trying to preserve my own life.”