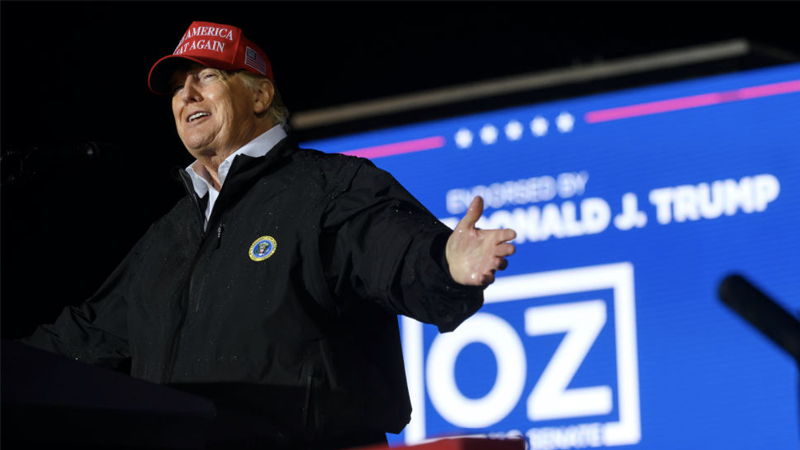 Former President Trump appeared off message and out of touch with his base after introducing the billionaire heir of COVID-19 vaccine maker Johnson & Johnson during a Pennsylvania rally on Friday.

Trump touted his friendship with Jets owner Woody Johnson, heir to the Johnson & Johnson pharmaceutical company, during a “Save America” rally in Greensburg, Pennsylvania in support of Senate candidate Dr. Mehmet Oz, drawing little to no applause from the audience.

“Woody Johnson. A great gentlemen. You ever hear of Johnson & Johnson? He owns the place. I tell you what, this guy’s got cash like nobody’s got cash,” Trump announced.

To make matters even more awkward, Trump then bragged about how Johnson’s wife Suzanne is from Ukraine who is “having a hard time” coping with its conflict with Russia.

The incident drew widespread condemnation by conservatives on Twitter.

Only competition can bring him back. Either he gets back or he loses. Either way, the country wins. https://t.co/30Jeb0DbdY

Conservative rapper Bryson Gray said: “Y’all support Johnson and Johnson now? Even though their jab is causing blood clots? Because Trump called the owner amazing and said he has a lot of money? Im just checking.”

y’all support Johnson and Johnson now? Even though their jab is causing blood clots? Because Trump called the owner amazing and said he has a lot of money?

Respect to the MAGA base for not cheering when Trump brought out Johnson & Johnson at the Dr. Oz rally pic.twitter.com/Dvg2KerLPe

In light of all the horrible news surrounding Johnson and Johnson! Donal Trump brings up the company’s owners as if it’s a good thing at a recent rally! pic.twitter.com/sNlf9NZTph

I hated this rally from the moment I saw the Oz signs in the backdrop.

It went cringe when Trump shouted out Johnson & Johnson.

I turned it off and tuned into Salty Cracker’s stream.

He needs new advisors and reinstated to Twitter ASAP.

Trump bringing the Johnson & Johnson guy on stage when his base doesn’t like it is a comic making a joke they think should kill but doesn’t and spending the rest of the set explaining why the audience is wrong https://t.co/LvHVZlJNCv

What are your thoughts?

Horrible move, and Donald Trump is out of touch with his base? pic.twitter.com/oWYeXa7UXR

WTF is Trump doing? Praising the owners of Johnson & Johnson on stage🤡pic.twitter.com/3eqMC8caPn

Trump just bragged on stage that the owners of Johnson & Johnson were at the rally and great supporters and how incredible they are???

Bragged about how Mrs. Johnson is from Ukraine???

This comes as the Food and Drug Administration (FDA) restricted the use of the Johnson & Johnson COVID injections on Thursday, citing links to life-threatening blood clots.

“After conducting an updated analysis, evaluation, and investigation of reported cases, the FDA has determined that the risk…warrants limiting the authorized use of the vaccine,” the FDA said in a statement.

Nevertheless, despite studies highlighting a range of dangerous side effects from the jab and numerous governments restricting its use, Trump has stubbornly continued to tout the experimental COVID-19 injections as safe and effective and repeatedly encouraged his skeptical supporters to take it.