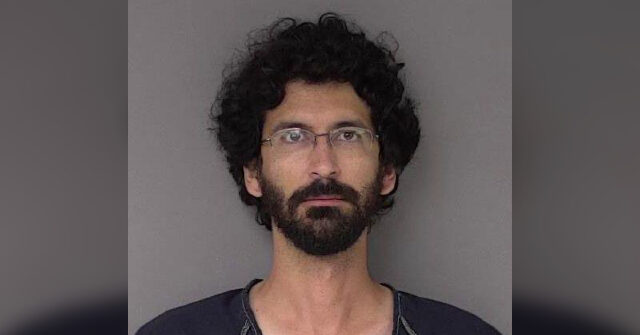 An Ohio man who allegedly attempted to kidnap a five-year-old girl was seen on footage trying to stab a police officer with a pen while waiting to be interviewed.

In the surveillance video, Duran is seen eyeing a pen on the table before grabbing it and attempting to stab the police officer.

The officer was able to defend himself against the attack and tackle Duran to the floor.

No one was injured, and the 35-year-old was taken into custody, according to police.

Before the attempted stabbing, Duran was awaiting to be questioned following a report that authorities received on Monday at St. Brigid Schools in Xenia, Ohio.

During an open house event for the upcoming school year, Duran claimed to be a parent of a child at the school.

The principal of the school thought that Duran was acting in a suspicious matter. He later deemed the 35-year-old was not a parent and called the police.

After being taken in for questioning and attempting to stab the police officer, Duran revealed many disturbing things while being interrogated.

Fox 19 reported that court filings say that he attended the open house event with the purpose of “attempting to find a small child to obtain sexual favors.” He also claimed that a similar event involving himself occurred in another city.

The suspect told investigators that he brought laced candy to give to a child in an attempt to lure a child.

Xenia police stated that there is no verification of Duran having candy on him that night, nor was he ever alone with the five-year-old girl he attempted to kidnap.

Duran also told investigators that he had child pornography on his computer, per the court filings.

According to Duran’s family, the suspect has never been arrested before and suffers from schizophrenia,  NBC News reported.

After the interview ended, the suspect attempted to escape but was restrained again.

Police noted that they are still investigating the incident.

Duran is expected to appear in court on August 29. The suspect is currently being held without bail.