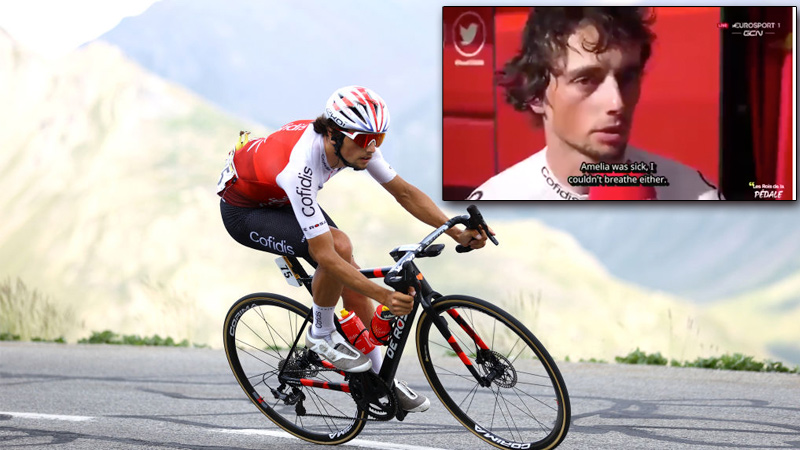 A French cyclist who exited the Tour de France early says he quit due to breathing difficulties that were also experienced by other riders in the Tour.

In an interview with French newspaper La Parisien, Cofidis’ cycling team’s Victor Lafay, 26, admitted the weather was extremely hot, but said he quit the race because he couldn’t breathe.

“The heat, again, is fine. We are well supplied, we water ourselves, we have ice cubes. I didn’t find it horrible today. After that I didn’t finish the stage,” he stated.

After that stage of the race, however, Lafay quit because in his words it was “impossible to breathe.” He says he also spoke with other racers who quit who experienced the same phenomenon.

“I talked about it in the peloton, there are many who have it. Castroviejo (Ineos), he told me it was the same, Pierre Rolland (B&B Hôtels KTM) too, Naesen (AG2R Citroën) who retired had also told me about it. We are all negative to the Covid tests. So either we’re negative but we still have it, or it’s something else. We talk a lot about the Covid, but there may be something else. In any case, we all have the lungs screwed up. And when the muscles are not oxygenated, after a while it can no longer work.”

Asked what he thinks might be the issue after typically doing so well in previous races, Lafay concluded he’s sick.

“Yes, I am sick. I’m not the only one in the pack. At the start, I spoke to Castro (Jonathan Castroviejo, ed.), and he told me he is not feeling well either.”

“I’m having a very hard time breathing. I feel like I don’t have enough oxygen, pain everywhere, legs, etc., no strength, and it’s only getting worse after each stage,” Lafay stated.

Again Lafay suspected the issue could be Covid-19, however he claimed he and others were testing negative for the virus.

“All the Covid tests came negative. There are tons of people in the peloton who are all feeling the same; they’re all negative as well. So maybe it could be something else! I don’t know; I’m not a doctor, I don’t know anything, but many of us have the same symptoms and are struggling on our bikes,” he described.

The Tour de France’s rules are governed by an international agency dubbed the UCI (Union Cycliste Internationale), whose latest set of rules “recommends the third dose for riders and especially for staff members.”

“[T]eams should pursue their efforts to further improve the vaccination coverage based on a full course of vaccination,” the UCI also recommends.

Riders participating in one-day races and races of less than 7 stages are also required to obtain a “UCI health pass” which is only issued if someone can prove they’ve undergone a full course of vaccinations.

In their own document, UCI admits: “We have only poor evidence about the maintenance of vaccine immunity over time, since while there are data on the decline of specific blood antibodies, we have only few information concerning the cellular immunity…Therefore, the duration of the vaccine program can be adjusted at any time based on new scientific knowledge.”

To be certain, it’s unclear whether Lafay, or his fellow riders were vaccinated.

If that is the case, however, it would follow through with a hypothesis made by Canadian physician Dr. Charles Hoffe, who previously warned microscopic blood clots in vaccinated patients could be causing “reduced effort tolerance,” causing people to get tired quicker.

“So I believe that these people blocked up thousands and thousands of capillaries in their lungs, in these six people. So I believe these people now have permanently damaged lungs because…I mean, that’s why they get out of breath,” Dr. Hoffe told a panel of doctors last year.

“The concern is: because these vessels are now permanently damaged in a person’s lungs, when the heart tries to pump blood through all those damaged vessels there’s increased resistance trying to pump the blood through those lungs,” Dr. Hoffe stated.

“So those people are going to develop something called ‘pulmonary artery hypertension’ – high blood pressure in their lungs, and the concern with that is that those people will probably all develop right-sided heart failure within three years and die because they now have increased vascular resistance through their lungs.”

Let’s hope Tour riders recover from the mysterious illness, and that it’s not not somehow related to the Covid vaccine already administered to millions.

The Woke Mob Sets Itself Up For Disaster