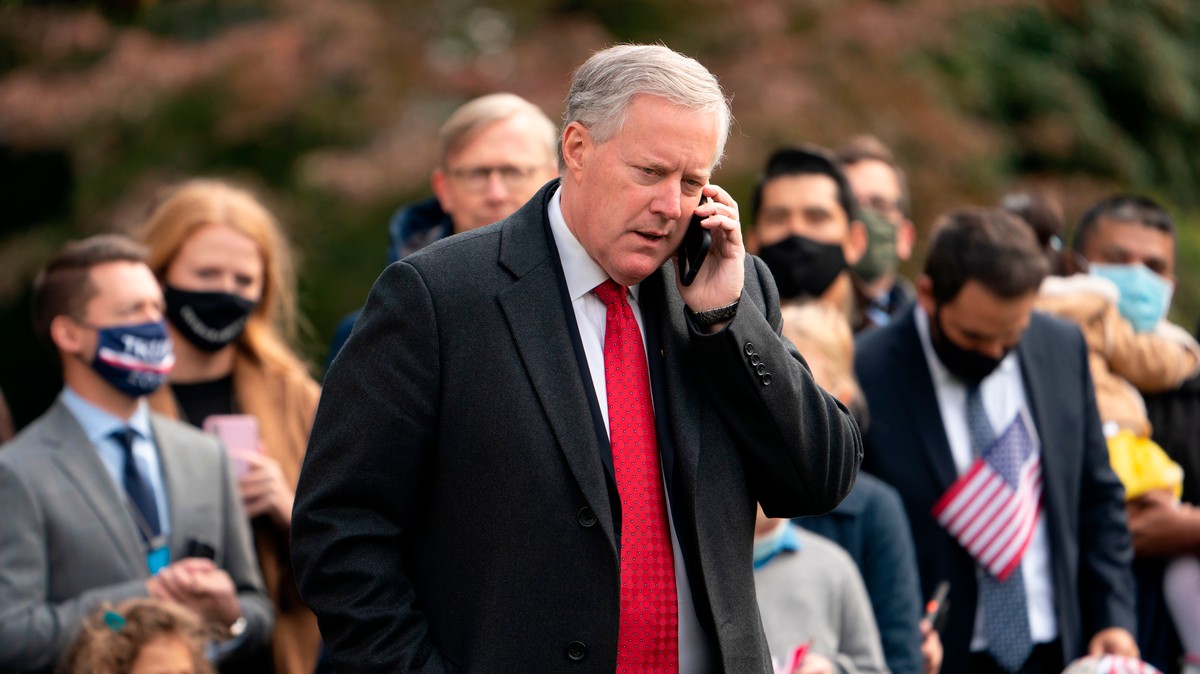 White House Chief of Staff Mark Meadows speaks on his phone as he waits for US President Donald Trump to depart the White House on October 30, 2020 in Washington, DC. (ANDREW CABALLERO-REYNOLDS/AFP via Getty Images)

A member of the team that planned the Jan. 6 “Save America” rally preceding the Capitol riot told congressional investigators that White House chief of staff Mark Meadows was on a planning call with organizers and discussed obtaining an official permit for a march on the Capitol, Rolling Stone reported Sunday.

Johnston said the three discussed obtaining a permit for the rally but ultimately—partially due to security costs and optics—decided to “direct people down there and make it look like they went down there on their own.”

During the rally, then-President Donald Trump spoke for more than an hour and—after endlessly repeating lies about massive election fraud in the “rigged” election—told the crowd: “If you don’t fight like hell, you’re not going to have a country anymore.”

After the rally crowd marched to the Capitol, hundreds of Trump supporters stormed the building and delayed Congress’s certification of the 2020 election result for several hours. Four people died during the riot, including a woman shot by Capitol Police and a Capitol Police officer, and at least 800 people have been charged in connection with the riot.

A spokesperson for Kremer flatly denied Johnston’s claim in statements to Rolling Stone. “The claim regarding the substance of any phone call between Katrina Pierson, Kylie Kremer, and Mark Meadows is absolutely false,” Kremer spokesperson Chris Barron told Rolling Stone, adding that “the last I looked, lying to Congress was a crime.”

Women for America First did not immediately respond to a request for comment from VICE News.

Pierson, the national spokesperson for Donald Trump’s 2016 presidential campaign and a senior adviser on the 2020 campaign, told Rolling Stone Johnston’s claims were “defamatory.” Another rally planner who was purportedly in the car at the time, Matt McCleskey, told Rolling Stone that he was “never in the presence of a phone call involving Meadows and Pierson” and that Johnston’s story was “not true.”

Johnston testified before the House committee investigating Jan. 6 in December and provided Rolling Stone with documentation that he had done so, the magazine reported. Johnston said the call in question took place on speakerphone as he was driving Kremer between “Save America” rallies.

Johnston said the calls had taken place on burner phones, which Kremer had said were for conversations with “high-level people.” Johnston told Rolling Stone he had personally bought three burner phones, including one for Kremer, at a CVS in California.

Johnston, a former ally of the Kremers, alleged in a conversation with Rolling Stone that Kremer and her mother, Women for America First founder and chair Amy Kremer, were “total grifters” who used donations to cover personal expenses.

The Jan. 6 committee subpoenaed Kremer and Pierson in September. Meadows initially complied with a subpoena to turn over documents, including text messages, but ultimately stopped cooperating and was later referred for prosecution for contempt of Congress by a mostly party-line House vote.

Meadows is also currently under investigation in North Carolina for potential voter fraud.