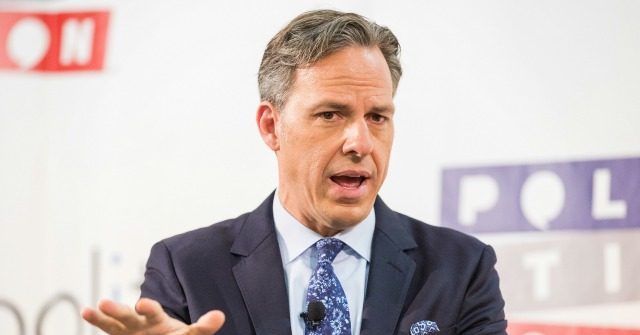 CNN anchor Jake Tapper on Monday’s broadcast of “The Lead” reacted to House Minority Leader Kevin McCarthy’s (R-CA) denial about his conversation with Rep. Liz Cheney (R-WY), in which he said he would recommend that then-President Donald Trump should resign.

Tapper said, “Moments ago at the press conference on the border. You asked McCarthy about the big story involving McCarthy. The audio revealing that he had, in fact, told House Republicans that he would recommend that Donald Trump resign after January 6. That’s something that McCarthy brazenly had denied, and it’s been proven publicly that he was lying. What did McCarthy have to say?”

Correspondent Melanie Zanona said, “Well, I asked him flat-out, Jake, why were you not truthful about the private conversations? Remember, he flatly denied that reporting, and then the audios were released. Take a listen to what he had to say.”

During a U.S. Mexico border press conference, McCarthy said, “The reporter never asked me that question. The reporter came to me the night before he released the book. And my understanding was he was saying that I asked President Trump to resign. No, I never did. That’s what I was answering. If you’re asking now, did I tell my members that — ask them if I told any one of them that President Trump, the answer is no?”

Zanona said, “So essentially, what McCarthy is trying to say here is that he thought the Times was reporting that he had asked Trump to resign. That is not what the Times reported. They just reported he had told other House Republicans that he planned to ask Trump to step down. And also, it is very important to point out here that McCarthy issued a statement vehemently denying The New York Times’ reporting, calling it false and wrong after the Times had already published their article. So if he was confused about the reporting at the point when he was denying it, he should have known what was being reported.”

Tapper said, “That doesn’t even make any sense, his denial. As you know, his denial came out after the story.”

Zanona said, “It’s confusing, but I think he’s trying to make it confusing.”

Tapper said, “Yes, you can lie, and then you can be good at lying. Not that there’s any great thing about being good at lying, but that’s just a horrible lie.”