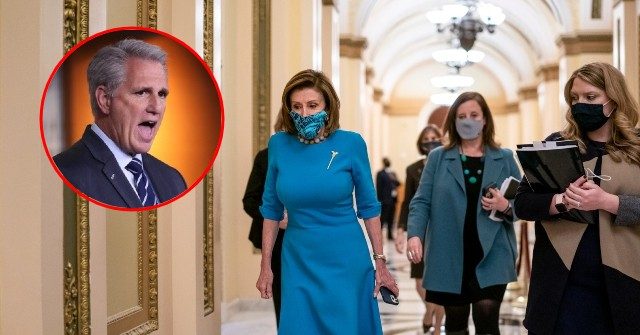 According to several congressional reporters, the Democrats called it quits for the night as McCarthy continued hammering the bill as a socialist wish list that will cripple the American people with unfair taxes and generations of debt.

“Leader McCarthy is welcome to continue his raving as late into the night as he wants. The House will return and vote first thing Friday morning,” one senior Democrat aide told Politico reporter Heather Caygle. “We thank the Minority Leader for helping us maximize the coverage of our efforts.”

As I tweeted a few mins ago:

In the meantime they’re going to let McCarthy talk as long as he wants https://t.co/3NBg1vFtEL

McCarthy’s speech has successfully delayed House passage of Build Back Better. There will be no votes in the House tonight

Hoyer tells @mkraju and me; no vote tonight.

B) In the queue is a procedural vote on a GOP effort to kill the bill (called a motion to recommit, or MTR, in Congressional parlance). Then final passage on the bill.

Kevin McCarthy even acknowledged the delay from the House floor as he continued speaking well past the four hour mark, vowing to keep talking as long as he could and as long as the American people listen. He said:

Mr. Speaker I think I owe an apology, because I understand the Democrats have left and they want to recess when I’m done. I don’t know if they can get to the airlines at this time to change their flights to Puerto Rico later tomorrow for their fundraiser. I’m sorry for that, but this is just too important.

“Mr. Speaker, I don’t know if they think they left I’m going to stop,” he continued. “I’m not. It’s too important.”

Republicans gathering behind McCarthy broke out into applause.