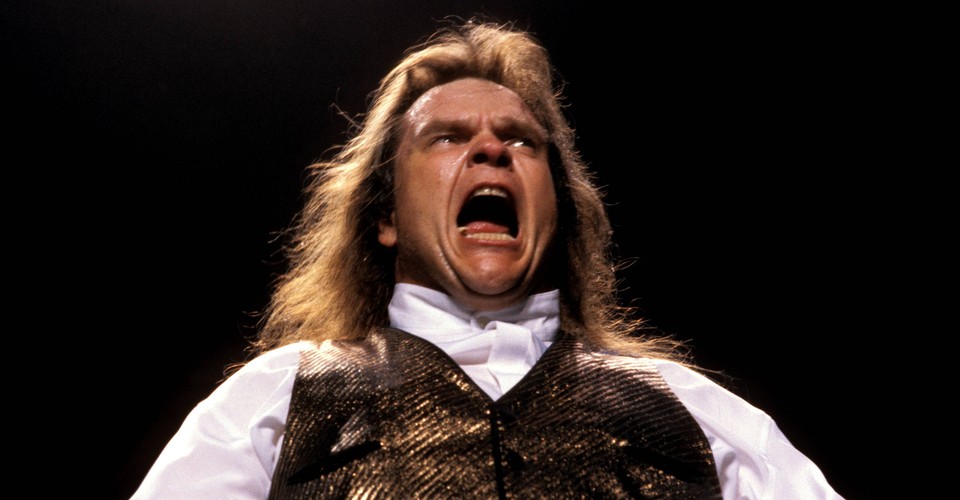 A perhaps unlikely figure dominated the stage of the Grammy Awards in 1994. Meat Loaf—who died on Thursday at the age of 74—was not young, hip, or alternative. Neither was he a critically adored veteran like Neil Young or Peter Gabriel, two of his fellow nominees in the category for best solo rock vocal performance. Meat Loaf had had one hit album about a decade and a half prior. His subsequent records and modest acting career had kept him in the public eye, but only barely. He was now 46, respectably short-haired, and looking about as uncool as someone could and still be considered a rock star.

Yet Meat Loaf’s comeback single, “I’d Do Anything for Love (But I Won’t Do That),” beat both Young and Gabriel—not to mention two of pop’s biggest sex symbols of that moment, Lenny Kravitz and Sting. It would become his best-known song, a staple of karaoke bars worldwide with its epic, refreshingly old-fashioned romance. Still, winning the award wasn’t the most memorable Meat Loaf moment that night. His aim-for-the-rafters, nearly 10-minute performance of the song at the Grammys was everything that rock was no longer supposed to be. In an era of dressed-down alternative rockers such as Kurt Cobain and R.E.M.’s Michael Stipe, it was grandiose—and it was glorious.

The Dallas-born Marvin Lee Aday—who later changed his legal first name to Michael—had roots in musical theater. Roles in Hair and The Rocky Horror Picture Show sharpened his proclivity for larger-than-life performances. But under the moniker Meat Loaf, his breakthrough was the 1977 album Bat Out of Hell. With his longtime songwriting partner Jim Steinman, who died last year, Meat Loaf made the album both an operatic, high-concept oddity and a triumph of emotive, everyperson anthems. He synthesized the qualities of the musicians he had once opened for—The Who’s soaring scope and Janis Joplin’s earthy soul. Bat Out of Hell became one of the best-selling albums of all time. And it unapologetically took power balladry, always seen as a little cheesy, to new heights.

Following Bat Out of Hell’s dark-horse success, Meat Loaf released a string of less popular records that failed to fully capitalize on his outsize voice and persona. “I’d Do Anything for Love” appeared on Bat Out of Hell II: Back Into Hell, a sequel that took place 16 years after the original album—and that many fans had doubted would ever come.

It was the power ballad to end all power ballads. It wasn’t the first, and it’s far from the last, but it remains the apotheosis of the form. Delicate piano, leviathan guitar, and symphonic scope are secondary to the song’s most potent instrument: Meat Loaf’s voice, which could drop from a righteous roar to a quivering whisper in an instant. When he sings, “Some nights I just lose it all when I watch you dance and the thunder rolls,” he embodies an elemental force. The purveyors of power ballads throughout rock history, from Styx to Matchbox Twenty, have made many of their sweeping, histrionic confessionals seem effortless; Meat Loaf, conversely, proudly showed his audience every strand of sweaty hair plastered across his forehead and every chunk of heart on his sleeve. Not only did “I’d Do Anything for Love” flout the early-’90s notion that rock had grown past its hokey past by subverting itself with irony, but it reconnected music lovers with a pageantry that’s essential to the genre.

From the June 2015 issue: How indie rock changed the world

The popularity of the power ballad has waxed and waned, but it’s never disappeared entirely. Paul McCartney worked with the form decades ago, and Harry Styles does so today. The genre mixes orchestral vastness with lyrics that speak to the solitude of the human soul, and can feel like an oasis of righteous earnestness. “I’d Do Anything for Love” sounds perhaps even more preposterous today than it did in the ’90s, and that’s the reason it endures. Like all great power ballads, it splashes its emotion across a fantastical canvas. This is the stuff of classical symphonies; Meat Loaf made it rock. In doing so, he reminded the world that popular music can convey the most profound themes.

The Grammy wasn’t Meat Loaf’s only accolade for the song. He also snagged a special honor at the Brit Awards for “I’d Do Anything for Love,” which was the most purchased single in the U.K. in 1993. No less than his fellow power-balladeer Elton John presented him with the distinction. Yet in his acceptance speech, Meat Loaf said that he was simply “one of the privileged few” whose success ought to be credited to many others. In a 2016 interview with Dan Rather, he went even further. “I will not allow them to use the word legend, star, or superstar,” the singer said in his soft, Texan drawl. “I consider myself just another human being with a different job than the plumber.”

Indeed, Meat Loaf always looked, walked, and talked more like his common man than like a singular rock star. That lack of pretension made his earthshaking songs hit even harder. The words “Sometimes going all the way is just a start” appear at the beginning of the video for “I’d Do Anything for Love.” They might as well have been his motto.