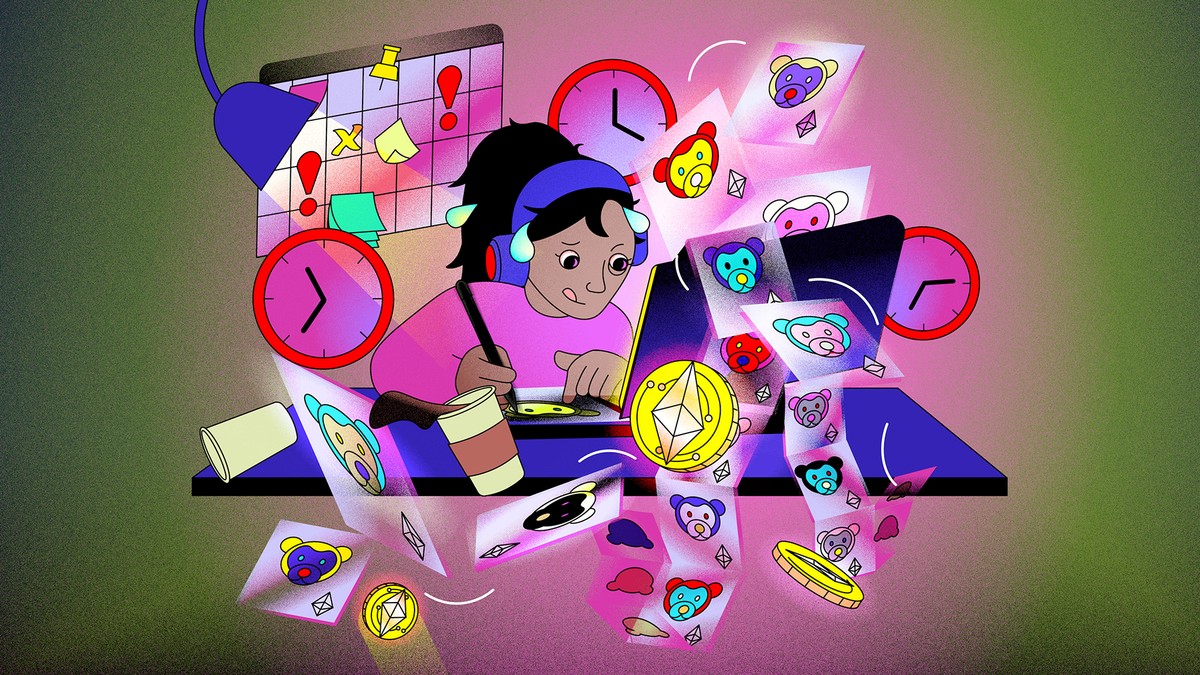 There are so many NFTs. A year ago, the scientific journal Nature counted 4.7 million in circulation, and the market for tradable digital assets has grown hugely since then. Some NFTs sell for staggering amounts of money, but most don’t—for every Bored Ape on the blockchain, there are hundreds of other cartoon monkeys vying for attention. The flood of images begs the question: Who makes it all? Well, a lot of times, it’s artists on gig work platforms like Fiverr.

A search for “NFT” on Fiverr yields more than 50,000 listings, for services ranging from pixel art and 3D modeling to marketing and technical development. Prices for art commissions vary wildly, from $5 for basic characters to more than $10,000 for premium 3D models and websites. While proponents of NFTs often champion the way the technology lets artists easily collect royalties from sales and resales, these Fiverr gigs are structured much like any other freelance job: Artists get paid once, in cash, and that’s that.

The NFT economy is built, at least in part, on an old way of doing things. Are these gigs really glimpses of the future of art? Dull but decent-paying graphic design jobs? Or something else altogether?

Many of the NFTs created by artists on Fiverr are PFPs, short for profile pictures. Typically, artists draw dozens of versions of basic traits—eyes, clothing, hairstyles—which get programmatically combined into the final art. This process is way faster than making thousands of characters one by one, and most say it’s much easier than other comparable illustration jobs. Supuni Suriyarachchi is a Sri Lankan artist who offers two Fiverr services, one for children’s book illustrations and another for NFTs. For both assignments, she charges between $500 and $2500; a book can take two to four weeks to complete, though, while she can finish an NFT collection in 1-3 days. And right now, she gets a lot more offers for work with NFTs.

For some artists, the pace can be grueling. Maciej Tomczyk, a 19-year-old Polish artist, has been drawing NFTs on Fiverr for six months and estimates that he can make in a day or two what people in his town doing service work make in a month. His strategy is to completely overload himself, working 10-14 hours for six to eight days in a row, then taking a break. He says he could structure his assignments like a classic nine to five, but prefers to vary his schedule.

“You’re going to work your butt off so you can make as much as possible because you might not have a job tomorrow.” —Veena Dubal

Ronaldo, a 27-year-old Brazilian artist who asked to use a pseudonym to not publicly disparage former clients, came to NFTs after creating pixel art and visual assets for game developers. To design a single game character with movements, he’d usually charge between $60 and $100. Now, with a similar amount of effort, he designs entire NFT collections for nearly $1,000. He’s astounded by the pay; he has considered dropping out of engineering school after realizing he already makes roughly double in a month what he would after 10 years into the job. At times, 20 to 30 people have contacted him in a day about gigs, so he hired someone just to talk to clients and, in October 2021, stopped making game art altogether.

Trends change fast in NFTs, and the actual assignments can vary a lot based on what’s hot at the moment. Jose Rico is a Fiverr seller who manages a team of artists, and he estimates that nearly 80 percent of his current clients are for NFTs. He said they often ask for art directly inspired by another project, hoping for similar success—recently, he’s seen more and more demand for 3D art, which many of the artists he originally hired don’t know how to make.

These factors combined, according to gig worker advocate and UC Hastings law professor Veena Dubal, encourage an unsustainable work culture—even if immediate earnings are high. “If this is a constantly shifting world of work in which your skills might not be useful the next day, you’re going to work your butt off so you can make as much as possible because you might not have a job tomorrow,” she said. “I think that is also driving high hours even if it’s higher paying than normal because it’s not secure, it’s not predictable work.”

“If I ever tell the community, ‘Hey, I’m the illustrator, and they haven’t paid me,’ they’re going to have a huge issue selling.” —Jose Rico

Few artists manage to keep track of the projects they work on, because clients infrequently follow up with results. But the prices that projects ultimately sell for can fluctuate quite a bit. Stefan produced a collection for $2,500 that generated almost $100,000 in trading volume within the first few days of sale. Other projects never sell out, though, or even come out at all.

Fiverr policies keep artists from receiving payments in crypto—though the company allowed payment in Bitcoin starting in 2015 through a partnership with Coinbase, they removed the functionality in 2017. While they’re officially forbidden by Fiverr’s terms and conditions to transact outside of the platform, some artists, like Jose, do so anyway. He only says yes to a small number of clients who offer it, though. Even without Fiverr to arbitrate on his behalf, if something goes wrong, he isn’t worried about people flaking on payment because he participates in a number of NFT Discords. “If I ever tell the community, ‘Hey, I’m the illustrator, and they haven’t paid me,’ they’re going to have a huge issue selling. They have a lot more to lose than I do.”

Some artists did have stories about the crypto world’s notorious scams, though. Ronaldo said one client was open about their plans of orchestrating a “rug pull,” where the team would make a bunch of big, public promises to attract buyers before disappearing with everybody’s cash. “I obviously declined because my art would be associated with it and future clients wouldn’t like that,” he said. Another time, after he attempted a side-deal to be paid half after a project’s launch, a client stopped responding after he finished the gig and never sent him his cut.

All of which begs the question, why don’t these artists just launch NFT collections themselves? The simple answer is marketing, often considered a key differentiator in a field driven by FOMO and Twitter trends, oftentimes more than by the actual art. “If you look at CryptoPunks, for example, it’s a collection that sold in the millions of dollars and it’s extremely simple, a 7-year-old could have done it to be honest,” Maciej said. “People think they could recreate it again and have the same success, which is completely wrong.” The details of this marketing work are murky at best, and many, like Maciej, say they are too busy with clients to think about their own projects. Anderson agrees: “I know how to make the art and I actually have some projects I want to make, but I actually don’t understand the marketing for NFTs,” he said. “It’s actually quite hard to find a team you can trust, because there are a lot of scammers. A lot of people will take your art and sell [it] by themselves.”

“I know how to make the art and I actually have some projects I want to make, but I actually don’t understand the marketing for NFTs.” —Anderson

Dubal, the law professor, notes that there may be other barriers to success as an NFT artist. “It’s not like anyone can make an NFT just because they are an artist. In order to be successful you have to have a platform to market to get people interested, to raise or make value out of this product,” she said. “[Many gig workers] don’t have the infrastructure to do that; the people that have the infrastructure are the people that already have a ton of capital. They might temporarily benefit from the work but will not get long-term or sustained income or security from it.”

In a broader conversation, NFTs have raised questions around how artists get paid, about decentralization, and who benefits from successful works, and many of the artists on Fiverr actually seemed to appreciate the pay boost, compared to other options. Ultimately, though, Fiverr sellers don’t get much of a chance to participate in the wealth-building or ownership promised by NFT evangelists; new technology doesn’t change that they are still gig workers paid a flat rate for each job.

And there’s also what happens tomorrow. Whether NFTs are a bubble or an innovation that will stick around indefinitely, sellers note the space is far more crowded than it was a few months back, and have had to lower their prices and adjust to less demand. Maciej is considering selling his NFT generating software and ending the gig soon; while he says he hasn’t noticed fluctuations in crypto price he thinks “it is going to end sooner [rather] than later.”