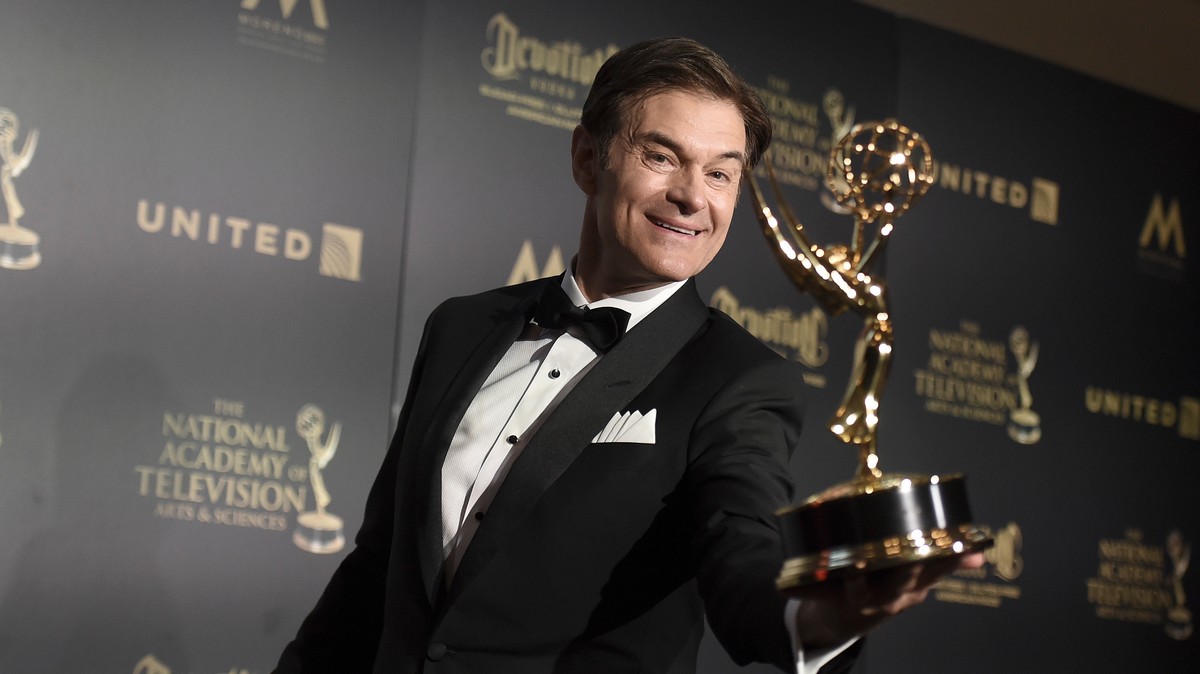 Dr. Oz is not in Jersey anymore. And he’s far from the only Republican carpetbagging across the country in search of political fortune.

Mehmet Oz, a controversial celebrity doctor who has parlayed his Oprah connections into fame and fortune, announced that he’d cross the Delaware to run for the Senate in Pennsylvania last week, even though he hadn’t lived in the state for decades and until very recently resided in a New Jersey mansion that overlooks the New York City skyline.

That makes him one of more than a half-dozen well-funded GOP candidates who have sought out redder pastures this year, jumping into competitive Senate races in states where their local ties aren’t particularly deep.

Carpetbagging is a tradition as old as American democracy, and isn’t always the kiss of death: Just ask former New York Sen. (and Illinois-born, Arkansas first lady) Hillary Clinton, or Utah Sen. (and former Massachusetts Gov.) Mitt Romney, or Hyannisport scion and New York Sen. Bobby Kennedy. The term ‘Carpetbagger’ actually originated as a derogatory label for Yankees who moved South to run for office after the Civil War.

But this year’s bumper crop of carpetbaggers is rather notable—and may have to do with a certain former New Yorker turned Floridian.

“Some of it is the Donald Trump effect,” said Jessica Taylor, the Cook Political Report’s Senate and gubernatorial race guru. “If you have enough money and enough name I.D. you can finagle your way into a race—especially in a primary.”

Oz’s claims to Pennsylvania are particularly flimsy. The only time he’d lived in the commonwealth was for a few years while he attended medical school and business school at the University of Pennsylvania in the 1980s. He says he moved back to Pennsylvania last year, and indeed voted in the state—but from his in-laws’ address. He took a break from promoting hydroxychloroquine as a treatment for COVID-19 (it’s not) and lose-weight-fast schemes as medically sound to get a newly minted Pennsylvania driver’s license, concealed carry gun permit, and medical license in the state.

But it appears that just days before Oz officially launched his Senate run in Pennsylvania, he was back in his New Jersey home. His daughter Daphne posted Thanksgiving pictures that were clearly taken in the same New Jersey mansion he showed off for People Magazine in February 2020.

And Oz has repeatedly posted photos from his New Jersey home in the past few months to his Instagram and Facebook accounts—more than 20 times in just the past three months, by the Philadelphia Inquirer’s count—raising further questions about how much time he’s actually spending in his newly adopted home state.

Oz’s move to Philadelphia has drawn eye rolls from both parties, including from his old congressman, New Jersey Democratic Rep. Bill Pascrell:

But he isn’t even the only carpetbagger heading to Pennsylvania.

Carla Sands, a wealthy Pennsylvania native, spent most of her adult life in Southern California, and served as a delegate from California for Ted Cruz at the 2016 Republican National Convention. She then became a major Trump donor during the general election andTrump made Sands the U.S. Ambassador to Denmark in 2017. Sands sold her Bel Air, California mansion for almost $20 million in 2019, and has already dropped $3 million of her own money into her Senate campaign.

Another wealthy, coastal opponent might also be jumping in soon. Hedge fund manager David McCormick, who grew up near Pittsburgh but has lived in Connecticut for nearly a decade, is seriously considering a bid as well, and has been urged to run by some local Republicans in the race to replace retiring GOP Pennsylvania Sen. Pat Toomey. The race is wide open after Trump-endorsed Sean Parnell dropped out after his wife accused him of physically abusing her and their children.

It’s notable that conservative commentator Kathy Barnette, who grew up in Alabama and after a decade in the Army moved to Pennsylvania about seven years ago, appears to have spent more recent time in the state than many of her primary opponents.

The only serious candidate in the primary right now who’s got a longer track record in the state is Jeff Bartos, a Pennsylvania native, real estate mogul, and 2018 GOP nominee for lieutenant governor.

Former University of Georgia football star Herschel Walker is running for Senate in the state where he won the Heisman Award, taking on Georgia Democratic Sen. Raphael Warnock. Walker has Trump’s endorsement and is the heavy favorite to be the GOP nominee.

But while Walker is a Georgia native whose gridiron exploits made him a household name in the state, he’s lived for decades in Texas, declaring a suburban Dallas home his primary residency on his taxes for past decade. He only moved back to Georgia full-time to run for the Senate, though his wife does own a home in Georgia.

Still, Walker’s wife landed in hot water for casting an absentee ballot in Georgia’s last election from their Texas home. But a state election board dismissed the complaints against her, saying there wasn’t enough evidence that she was ineligible to vote in the state (she owns a Georgia home and runs a business there as well).

Walker hasn’t been shy about his Texas time: His first public tease that he might run for the Senate came in an odd video from his suburban Dallas home he posted to Twitter captioned “Georgia on my mind” where he showed off new Peach State license plates on his car.

Kelly Tshibaka is running with Trump’s endorsement against Alaska Republican Sen. Lisa Murkowski, the only Senate Republican up for reelection this year who voted to impeach Trump.

Tshibaka grew up in Alaska but left for college in 1995, according to her LinkedIn profile, and hadn’t returned until recently—she worked for the federal government in D.C. for nearly two decades before taking a job with the Alaska government in 2019.

Eight months after returning to the state, she applied as a resident for a sportfishing license—less than the one-year requirement for residential permits. She said she meant to apply for a visitor license, but the incident led to an extensive investigation by state police into whether she intentionally lied, which could result in  a misdemeanor and a $300 fine. Tshibaka registered to vote in Alaska in 2019, but it appears she was still registered to vote in Maryland as well—a common occurrence for people who move and forget to cancel their old voter registration.

“Alaskans take their fishing very seriously,” Murkowski told CNN in October. “She’s got a problem with her fishing license and residency problem.”

In Arizona, solar power executive Jim Lamon is currently in between properties—he’s currently renting an apartment in the Phoenix area—but also recently built a massive ranch in Utah. Lamon even featured a photo of himself outside the Utah ranch on his Senate campaign website.

“Jim followed the rules regarding his Utah home and he has never changed his primary residency from Arizona since moving here in 2009,” Lamon spokesman Stephen Puetz told VICE News. “He launched his campaign in May 2021 and has spent nearly all of his time living and campaigning in Arizona where his company is headquartered. His apartment in Arizona was only a temporary move while locating and purchasing a new home, which is closing this month.”

Lamon’s sister posted on Facebook earlier this year that the Utah ranch was his “second home” and that he planned to be “living there half a year and Arizona half.”

Lamon isn’t the only jetsetter in the Arizona GOP primary, however. One of his opponents, Blake Masters, grew up in Tucson, left to attend Stanford University in 2004, and after law school there stayed in Silicon Valley to work for billionaire PayPal founder Peter Thiel.

“I did spend the first decade of my career in Silicon Valley,” Masters said at a Navajo County GOP event in April.

Masters moved back to Arizona in 2017, according to property records, and registered to vote there in 2018. Thiel has also donated $10 million to a super PAC backing Masters’ Senate campaign. Not long after moving back, Masters seriously weighed a run for Senate in 2019, before passing.

Masters’ LinkedIn profile lists him as working in San Francisco and Los Angeles, but that’s based on where the company office is located—not where he’s living.

“My physical office is in LA, and LinkedIn (a dumb website, but that’s beside the point) goes by office HQ, not residence,” Masters emailed VICE News. “I never lived in LA, my family and I moved from SF back to Tucson (where I grew up) in late 2017, AZ full-time by mid 2018.”

To be fair, it’s not just Republicans with tenuous ties to their states running for higher office. Wisconsin Democratic candidate Alex Lasry, a Milwaukee Bucks executive and son of team owner and billionaire hedge fund manager Marc Lasry, didn’t move to the state he’s running in until his dad bought the team in 2014, and the first time he visited the city was when his family was in talks about purchasing the team. Last summer, Lasry said he was pleasantly surprised that Milwaukee was a real city with real attractions.

“I came in with, kind of, just trying to keep an open mind about the city,” Lasry told the Jewish Museum Milwaukee last summer. “The only places I had lived in prior were New York, Philly, and D.C.—so kind of bigger East Coast cities. And when I came here, I think what most surprised me about Milwaukee is the fact that Milwaukee has all the same things as any city, especially any big city, has.”

And New York Times columnist Nicholas Kristof has received plenty of blowback when he moved back to his childhood state of Oregon to run for governor—and may not even qualify, as the state has a three-year residency requirement to run for office. He’s owned Oregon property since the 1990s and paid his taxes there since 2019, but voted in New York state last year.

But this year’s Senate crop of GOP candidates has an unusually high number of people whose runs have raised residency questions. It remains to be seen whether voters will care—and what they’ll consider political opportunism versus coincidence.

“When you were the Heisman trophy winner in Georgia and one of the most beloved players ever in the state that can carry weight with people. If you’re trying to introduce yourself to voters and don’t have the name ID that Walker does it can get trickier,” said Taylor. “When the primaries heat up we’ll see how much this matters with voters.”