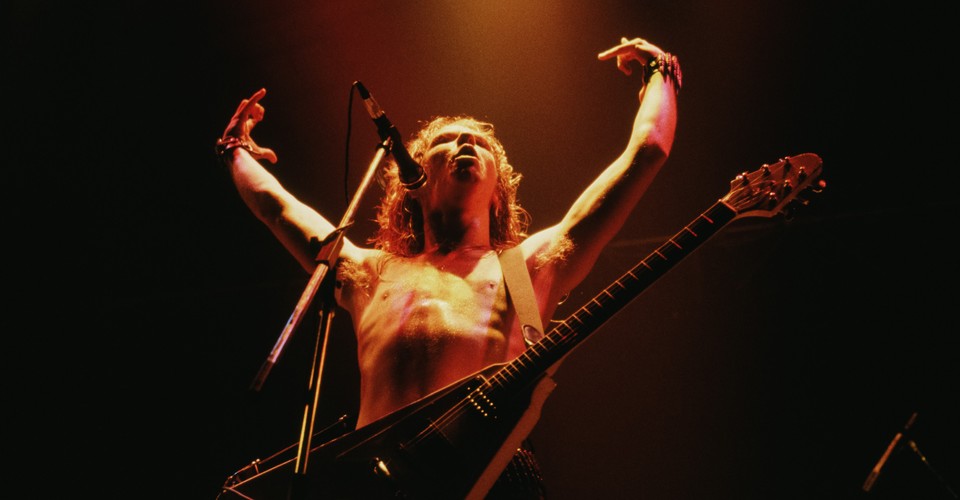 Metallica’s “Sad but True” is one of the metal canon’s great statements. The groove is ogre-ishly heavy, downtuned, encumbered, a fantastically oppressed/oppressing trudge, with guitar notes that seem to bend and bow under the conditions of existence itself—the incurved gravity between God’s hands.

As for the lyrics, they are rich with a kind of deep-space irony. “Hey!” sing-snarls frontman James Hetfield, “I’m your life, and I no longer care!” What does that mean? What’s he sing-snarling about?

“Sad but True” makes a dizzying and very heavy-metal claim: that our own being-in-the-world is somehow alien to us, that our life—what we imagine to be our private, made-to-measure destiny—possesses us like an interloper, with ends that are not our ends. “I’m your dream, make you real / I’m your eyes when you must steal / I’m your pain when you can’t feel / Sad but true!”

The Anglo-Saxon concept of wyrd might help us here. The etymological forebear of our own weird, the word seems to mean something between “the human condition” and “the preordained course of events.” “Gaéð á wyrd swá hío scel,” grunts Beowulf before his fight with the monster Grendel, which Seamus Heaney, in his Beowulf, translates as “Fate goes ever as Fate must.” Wyrd feels twistier than that, though—more fluid than big-F Fate, more personal and contingent. But equally nonnegotiable. The doom in your marrow, you might say. The sad-but-true.

How does a song like this—a mighty song, a groaning-with-mystery song, a song that appears to have lumbered full-size from the darkness of our origins—assemble itself? And is there anything that the rest of us (i.e., those not in Metallica) can learn from the process? If only we could somehow observe and track the successive developmental stages of “Sad but True,” and be privy to its evolutions …

Well, thanks to a massive box set issued earlier this year for the 30th anniversary of Metallica’s squillion-selling self-titled 1991 album, we can. It includes 14 versions of “Sad but True”—demos, rehearsal tapes, abandoned takes, live recordings—from the germinal itchings of something called “James’ Riff Tapes” to the cosmic swagger of the final version. I have listened to them all, I have studied them all, and here for your benefit are the lessons I learned.

Lesson 1: Honor the first scratchings. The “Sad but True” journey begins with a home recording of James Hetfield hacking privately at his guitar, forcing a sort of throttled grind out of it while a drum machine stomps crudely in the background. The vibe is lo-fi industrial, the riff is incomplete—but the effect is electrifying. It’s like hearing a knot of DNA. Much work lies ahead, much sweat and weltering. Other strands of genetic information remain to be discovered. It’ll be nearly a year before Metallica records what will become the album version of “Sad but True.” And yet here it is, in embryo, furious with vitality.

Lesson 2: Simplify, simplify. BREATHE. Metallica came out of—helped invent—thrash metal: speed, intricacy, overload. Working on what came to be known as “The Black Album,” at the slower tempos preferred by their new producer Bob Rock, the band members discovered that their heads-down playing style was falling apart. So they changed. James Hetfield learned to use fewer words in a line, stretching syllables across the beat. Drummer Lars Ulrich tore down his technique and went in reverse. He went back to the source—to the Stone Age thump of AC/DC’s Phil Rudd. And across the successive versions of “Sad but True,” you can hear the song getting slower, mightier. You can hear it putting on weight.

Lesson 3: Devolution is inevitable. July 6, 1990, a “Writing in Progress” recording. No vocals, no audible bass, and no second guitar: It sounds like Hetfield and Ulrich are just bashing it out together. Ragged, too fast, but the structure’s there. Four days later, another recording: Metallica adds a second guitar and—it sounds terrible! The tension, the drama, dissipates in ribbons of surplus notes and squandered momentum. Give up? Not at all. This is the process: Through wastage and awfulness you must splash and splash, until you get to where you’re going.

Lesson 4: Get out of the way. A preproduction rehearsal recording, and suddenly, magically, almost impossibly, ‘Sad but True’ is swinging. Somewhere in the unconscious of the song, beneath the metrical grid, the band has located a deep, deep shuffle-like vibration: extremely heavy. There’s only one way to do this, aspirant artist: You have to subsume your ego into the performance and let it happen. You have to make room, by removing your own pertinacious little agenda, for the song, the poem, the story, whatever, to become itself. You have to open yourself to the wyrd-ness. You have to be crushed by the sad-but-true.

Lesson 5: Finish it. And then add spice. The album version. Bob Rock, hired specifically to give Metallica a fat, radio-friendly bottom end without sacrificing the band’s potency, here achieves his masterpiece. And he does it with a masterpiece touch: To the cushioned detonations of the rhythm section, the heave of the riff, and the choral layerings of Kirk Hammett’s guitar, he adds—yes—some Latin flavor. Just a sprinkle. A desiccated, funky shik-shik, either maracas or a cabasa, a dry detail on which, as soon as it becomes audible, the entire massive structure somehow depends. Utterly gratuitous, completely essential.