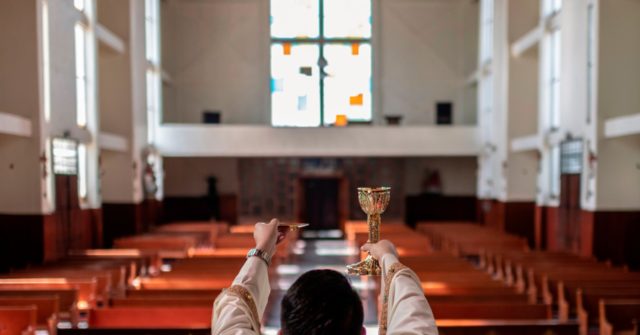 The Catholic Multimedia Center (CCM) in Mexico published its annual report this past week on violence and the Catholic Church, concluding that Mexico is “a dangerous country to exercise the priesthood in Latin America.”

The report enumerates 79 violent attacks perpetrated against members of the Catholic Church in Mexico between 1990 and 2021, including attacks on “1 cardinal, 61 priests, 1 deacon, 4 religious, 9 lay people and a Catholic journalist,” along with the unresolved disappearance of 2 priests.

The report indicates that four priests have been murdered so far under the present administration of President Andrés Manuel López Obrador, three of them in the past year.

The vast majority of the attacks recorded “have had threats, extortion, uprising, torture, and murder as their modus operandi,” it declares.

A priest wearing a face mask is seen blessing the faithful outside the Basilica of Guadalupe, in Mexico City. (CLAUDIO CRUZ/AFP via Getty)

“The crimes of extortion, fraud against priests and religious, as well as attacks on Catholic churches have been on the rise during the current administration,” it adds.

In its 2021 World Watch List, the Christian charity Open Doors placed Mexico at number 37 of the 50 countries in the world where it is most dangerous to be a Christian, more dangerous than Kenya, Democratic Republic of Congo, and Indonesia.

The source of the anti-Christian persecution in Mexico, the Watch List asserts, is “organized corruption and crime.”

“Christians who are outspoken about the hope of Jesus in the face of drug-trafficking and violence are often targeted by gangs to remove any obstacle in their quest for control,” the List states. “In indigenous communities, anyone who decides to abandon the community’s religious beliefs or syncretistic practices often faces rejection and punishment.”

“Finally, there has been an increase in violent and discriminatory acts against Christians by people who believe Christians are bigoted,” it declares.

According to the CCM report, three priests were murdered in Mexico during 2021.

Father Gumersindo González Cortés was found dead the night of March 27 in the community of Guadalupe Cerrito, in the state of Guanajuato.

Father Juan Antonio Orozco Alvarado, a parish priest in Santa Lucía de la Sierra in the state of Zacatecas, was on his way to celebrate Mass on June 12 and was killed after being caught in the crossfire between criminal gangs.

Father José Guadalupe Popoca was murdered on the morning of August 31 inside the San Nicolás de Bari parish in the town of Galeana in the state of Morelos.

The CCM also asserts that “neither the state prosecutors or the Attorney General’s Office have given clear answers to this phenomenon, on the contrary, the investigations are irregular and with large gaps.”

“More than 80 percent of the cases of murders, extortions, attacks and robberies against Catholic churches have not been solved,” the report states.