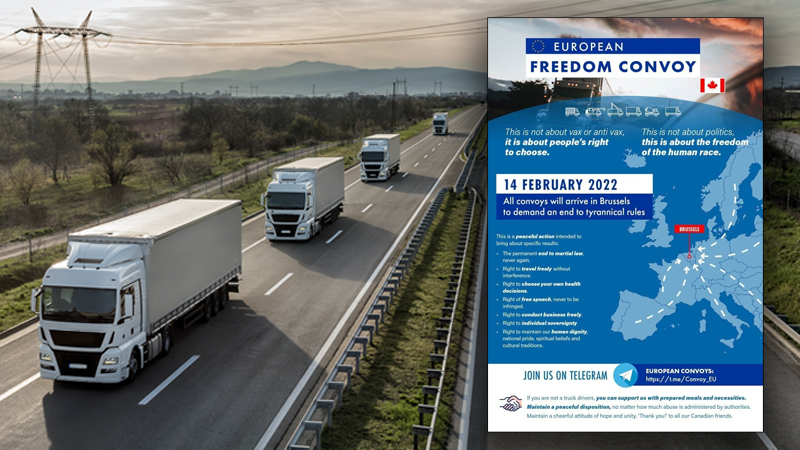 More Freedom Convoys are springing up in Europe and Australia in the wake of the 50,000-strong convoy of Canadian truckers who descended on Ottawa over the weekend to fight against draconian COVID mandates.

Worldwide support for the Canadian truckers began manifesting in the Netherlands, where convoys of semi-trucks were spotted rallying against the country’s COVID vaccine passports.

#Netherlands 🇳🇱 Truckers are Warming up in Friesland in the Netherlands, They have just carried out a test. Several EU countries are now planning a large convoy to Brussels
Netherlands Convoy🇳🇱https://t.co/U8ao7Oz9un pic.twitter.com/Hs6HHc2Kry

Truckers joined by motorists form a convoy in the province of Friesland in the north of the Netherlands against restrictions and the health pass. pic.twitter.com/k3vk1BGdBm

Freedom Convoys were also spotted in Italy and Germany on Sunday.

Italy today – they started their own convoy. pic.twitter.com/3r9GCasVJ9

The Freedom Convoy is global now!

And now Italy 🇮🇹 has joined in. pic.twitter.com/4GCrs9cwv3

The newly-formed European Freedom Convoy released a unifying statement on Sunday outlining a plan to rally in Brussels and occupy the city until all COVID restrictions are lifted.

⚠️The 14th February 2022 Will be the Day when ALL European Convoys will RDV in Brussels and Siege the European Capital until Vaccination Pass and Associated Restrictions are Abolished. #TruckersForFreedom2022 #TruckersForFreedomEurope #europeanfreedomconvoy @EuropeConvoy pic.twitter.com/ukOFqyi2xd

This is in addition to protests already sweeping across the Dutch nation.

BRUSSELS: Protesters take to the streets to demonstrate against COVID mandates pic.twitter.com/xeB0AHxdwa

According to the group’s Telegram post, convoys are also being organized in the United States, France, Finland, and Czechoslovakia.

Meanwhile, Australians, who have endured some of the harshest COVID restrictions in the world, are mobilizing their own Freedom Convoy.

🎯 Australian convoy is starting to grow in size and is heading to the capital city of Australia.

The convoy will grow in size after it makes a few more stops to join some other convoys. 🇦🇺

The people are ready for the convoy to Canberra to stop and have a feed.

This is what Australia is all about. Fight for freedoms and don’t sit around waiting for the government to save us because it will never happen 👊 pic.twitter.com/NSUvr5sDho

#BREAKING: Australian truckies from across the country, inspired by their Canadian counterparts, are heading for the capital in protest of mandates.

The Australian Freedom Convoy already raised over $150,000 on GoFundMe to support their journey and occupation of Australia’s capital of Canberra, which they announced will take place on January 31.

The Australian freedom convoy has almost met its goal. pic.twitter.com/DZthOwbOlx

Let’s all support our Aussie truckies

I’ll be at Pheasants Nest from 7am on Monday with lots of FREEDOM signs if anyone wants them#ConvoyToCanberra #FredomConvoy2022 #freedomconvoy pic.twitter.com/E5I6GEZ5Tk

Australian WA truckers are now headed in Convoy to Canberra

Do you know right now in Australia patriots are driving from their state to Canberra in our own convoy? No more time for excuses join them or support them. Look up telegram group 2022 Official convey to Canberra. What will you tell your grandchildren when they ask what do pic.twitter.com/TUaoMeO93g

And where is the mainstream media coverage of these unprecedented and historic developments?

A lot of strange coverage by the media on this thing but this one wins the prize.pic.twitter.com/bLauTjI9NG