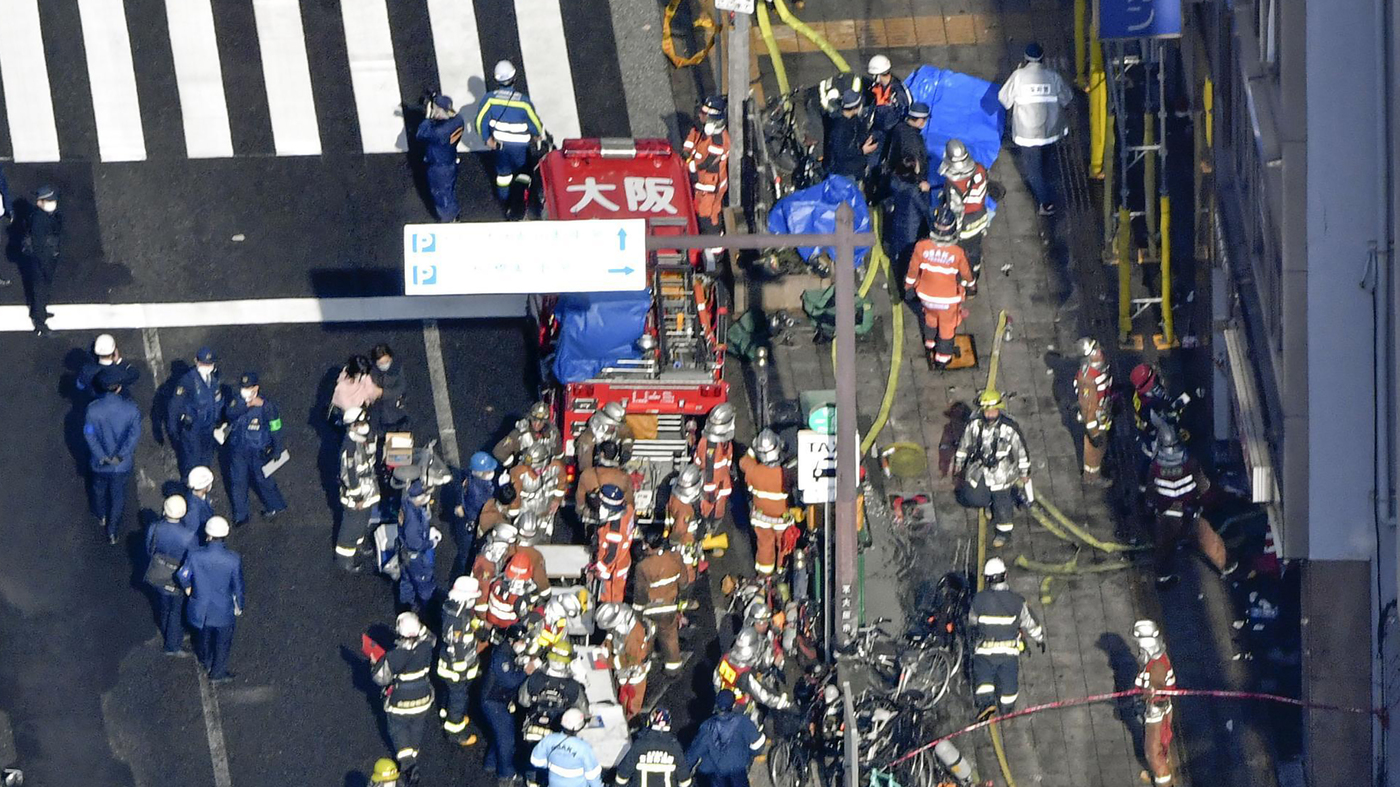 Policemen and firefighters gather near a building where a fire broke out in Osaka, western Japan on Friday. Dozens of people are feared dead, fire department officials said.

Policemen and firefighters gather near a building where a fire broke out in Osaka, western Japan on Friday. Dozens of people are feared dead, fire department officials said.

TOKYO (AP) — More than 20 people were feared dead after a fire broke out Friday in a building in Osaka in western Japan, officials said, and police were investigating arson as a possible cause.

The fire started on the fourth floor of an eight-story building in the major business, shopping and entertainment area of Kitashinchi, Osaka fire department official Akira Kishimoto said.

Twenty-seven people were found in a state of cardiac arrest and one other woman was injured, Kishimoto said. The woman was conscious and brought down by an aerial ladder from a window on the sixth floor and was being treated in a hospital.

Later Friday, 19 people were pronounced dead and three others were resuscitated, NHK national television and other media reported. Japanese authorities declined to confirm those reports.

A doctor at one of the hospitals treating the victims said he believed many of them died after inhaling carbon monoxide as they had limited external injuries.

Chief Cabinet Secretary Hirokazu Matsuno said “many people have died or being in a state of heart and lung failures,” without disclosing the exact number. Osaka Gov. Hirofumi Yoshimura offered condolences.

The building houses an internal medicine clinic, an English language school and other businesses. Many of the victims are believed to be visitors at the clinic on the fourth floor, fire department officials said.

The cause of the fire and other details were not immediately known. Osaka police said they were investigating to determine whether the fire was caused by arson or an accident.

Media reports said police were searching for a man who witnesses saw carrying a paper bag from which an unidentified liquid was dripping. Police declined to confirm those reports.

NHK said a female outpatient at the clinic’s reception desk saw the man, while another person nearby said the fire started soon after he put the leaky bag on the floor.

People on other floors of the building were believed to have been safely evacuated, Kishimoto said.

NHK quoted a witness as saying she heard a woman’s voice coming from the fourth floor calling for help. Another witness told TV Asahi he saw flames and smoke coming out of windows on the fourth floor when he stepped outside after hearing a commotion.

In total, 70 fire engines were mobilized to fight the fire, which was mostly extinguished within about 30 minutes of an emergency call, officials said.

In 2019 at the Kyoto Animation studio, an attacker stormed into the building and set it on fire, killing 36 people and injuring more than 30 others. The incident shocked Japan and drew an outpouring of grief from anime fans worldwide. In 2001, an intentionally set blaze in Tokyo’s Kabukicho entertainment district killed 44 people — the country’s worst known case of arson in modern times.