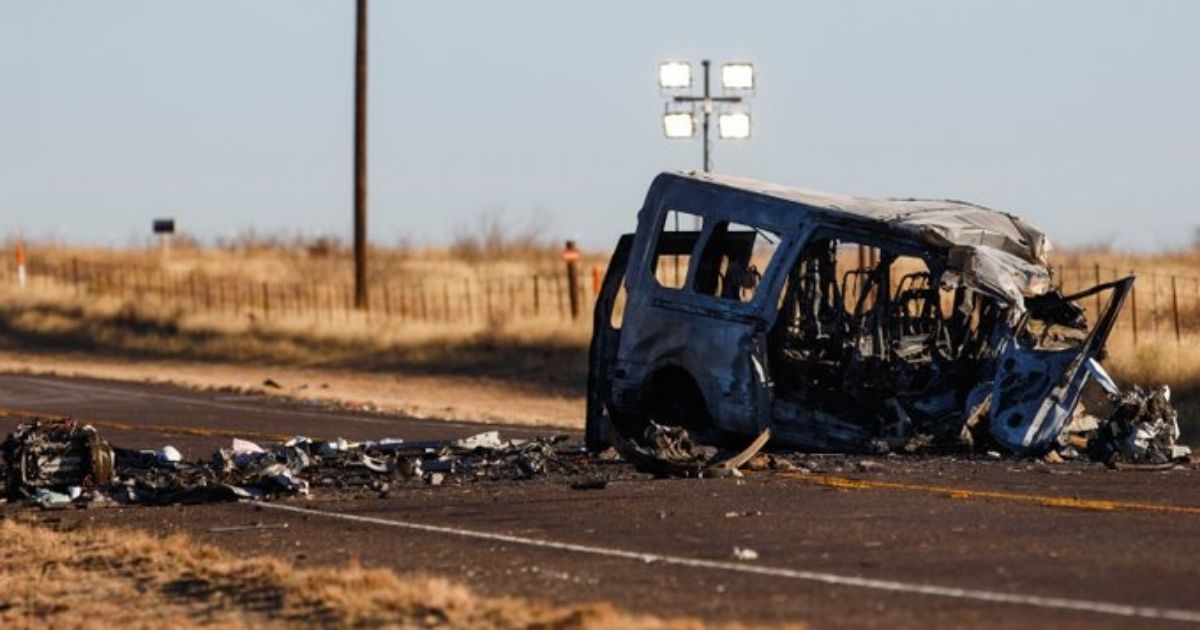 As if there aren’t enough senseless deaths in the world, shocking new evidence suggests that a tragic collision that claimed the lives of nine people in Texas last week could have been avoided had a child not been behind the wheel of one of the vehicles.

Bruce Landsberg, the vice chairman of the National Transportation Safety Board, said a 13-year-old boy was driving the pickup truck that rammed into a van on Thursday in a fiery crash that killed nine people, including six college golf teammates from the University of the Southwest in New Mexico and their coach.

“A 13-year-old child was behind the wheel of the pickup truck,” Lansberg said at a news conference Thursday.

According to the NTSB investigation, the left-front tire of the Dodge truck — which was a spare — blew out.

This caused the young driver to veer hard-left, so the truck he was driving crossed the median and jumped into the opposing lane.

The pickup then collided with the university’s Ford Transit Passenger Van, killing six of the eight golf teammates onboard and their coach.

A 13-year-old boy was behind the wheel of a pickup truck that struck a van in Texas on Tuesday night in a collision that killed nine people, including a college golf coach and six of his players, officials said. https://t.co/hlMIMJtXoq

“Both vehicles caught fire and burned. Both occupants of the Dodge pickup were killed in the crash,” the Texas Department of Public Safety said in a news release.

“The Ford passenger van was returning to Hobbs, NM from a golf tournament in Midland, TX. The van was transporting The University of the Southwest men’s and women’s golf team.”

“As a result of the crash, six (6) students and one (1) faculty member were killed. Two (2) students in critical condition were transported by helicopter to University Medical Center in Lubbock, TX,” investigators said.

The 13-year-old boy driving the truck has been identified as Ricky Siemens of Seminole, Texas, KOB-TV in Albuquerque, New Mexico, reported.

Ricky was illegally driving alongside his dad, Heinrich Siemens, 38, when their tire blew out.

The two surviving students in the passenger van, Hayden Underhill and Dayton Price, were airlifted to a local hospital.

In October, the Siemens family lost their home in a fire.

KOB reported that Agatha Siemens, Henrich’s wife and Ricky’s mother, posted a video of the blaze on Facebook, saying, “Please pray for us. Our home is gone. It caught fire by a kitchen accident we lost everything. Henry kids & I are all ok. None of us are hurt.”

A family friend said Ricky had accidentally started the blaze.

“Just before Christmas, their house burned down,” family friend Aganetha Siemsens told the U.K.’s Daily Mail. “The 13-year-old made some eggs and forgot about it.”

The Daily Mail later reported, however, that the house blaze likely had a different cause. It said a fire report obtained from the Gaines County Sheriff’s Department revealed that an unnamed occupant of the home told first responders that “they were cooking meth.”

Siemsens said no one was hurt in the blaze, although the family dog died.

“I couldn’t imagine going through all that and then to have this happen,” she said. “It’s just so sad.”

In Texas, teens can begin the classroom phase of a driver education course at age 14 but they can’t apply for a learner’s permit until age 15.

There are no words to adequately sum up this senseless tragedy. It’s one thing to teach a kid to drive on a farm, but it’s insanely reckless to allow him behind the wheel on a busy highway.