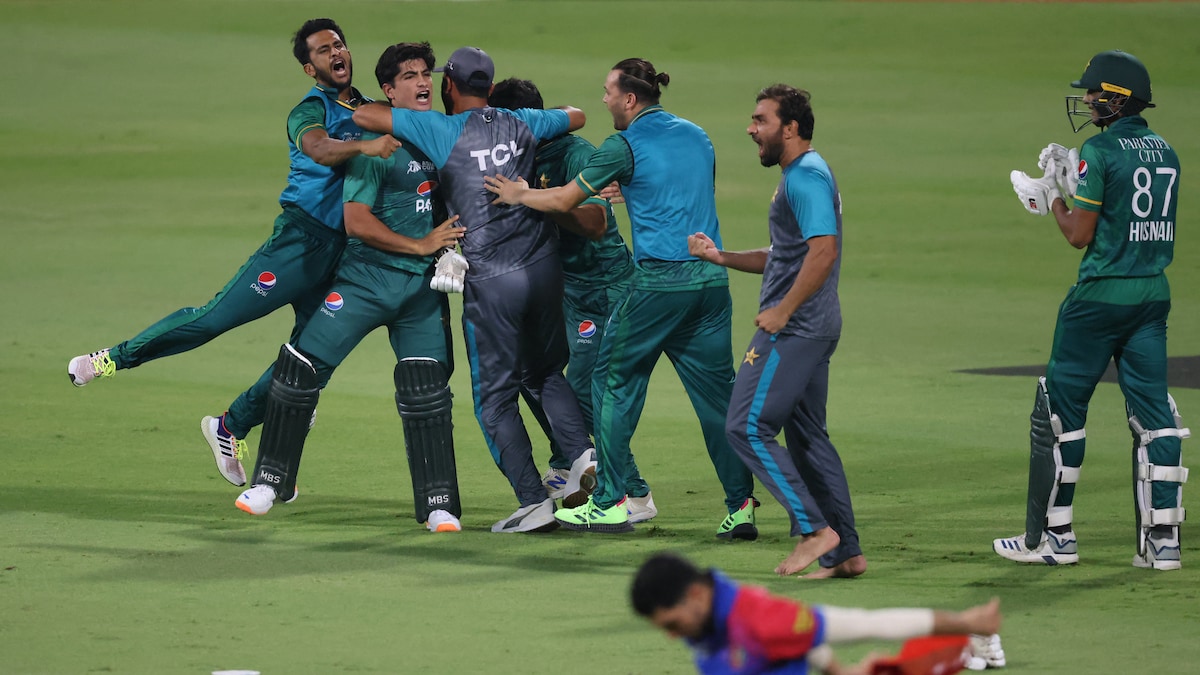 Right-arm pacer Naseem Shah struck two telling sixes in the final over as Pakistan defeated Afghanistan by one wicket in a tense Asia Cup Super 4 match to throw India out of the tournament in Sharjah on Wednesday. Afghanistan were firmly in control of the match till the last over, reducing Pakistan to 118 for nine. But, Naseem had other plans as he hit Fazalhaq Farooqi for two consecutive sixes to send both Afghanistan and India out of reckoning for a final berth. With two wins from as many games, both Pakistan and Sri Lanka have sealed their places in the final of the tournament to be held on Sunday. India and Afghanistan will lock horns in their final Super 4 match on Thursday, which has been rendered inconsequential.

Pakistan had a torrid time during their chase, losing skipper Babar Azam (0) early as the batter endured another failure after being trapped LBW by Fazalhaq Farooqi (3/31) in the second ball of the innings.

To make matters worse for Pakistan, Fakhar Zaman (5) was run out in the first delivery of the fourth over, off a direct throw from Najibullah Zadran.

Afghanistan got the upper hand when Rashid Khan (2/25) trapped in-form Mohammad Rizwan (20) in front of the wicket with a peach of a delivery that was sure to hit the middle stump, crashing the batter on to his back foot after pitching just outside the off-stump.

On the back foot after losing three key batters, Shadab Khan (36) took the attack to the opposition and clobbered Mohammad Nabi for a six and a four in the 12th over to break the shackles.

Shadab was at his attacking best as he sent a Mujeeb delivery over long-on boundary to being down the equation.

Fareed Ahmed (3/31) brought Afghanistan back into the match by breaking the dangerous-looking 45-run fifth-wicket stand between Iftikhar Ahmed (30) and Shadab.

Ifitkhar pulled a slower short delivery straight to the hands of Ibrahim Zadran as the batter failed to get any elevation.

New man in, Mohammad Nawaz made his intentions clear and guided another short delivery of Ahmed past the wicketkeeper to the third man boundary.

But Shadab looked in ominous form as he slog-swept Rashid over the boundary to ease the pressure.

However, Rashid had the last laugh as he dismissed Shadab in the next ball with the batter thick-edging one to Azmatullah Omarzai at short third man.

But there was hardly any respite for Rashid as Asif Ali slog-swept him for another six in the very next ball.

Two wickets in the 18th over bowled by Fazalhaq Farooqi tilted the balance of the match in Afghanistan’s favour .

He first dismissed Nawaz and then went through the defence of Khushdil Shah as Pakistan lost the plot.

Fareed Ahmed then cleaned up Haris Rauf in the first delivery of the next over as Pakistan slumped to 110 for eight.

Fareed Ahmed delivered another telling blow to Pakistan in the penultimate ball of the 19th over, scalping the vital wicket of Asif Ali.

With 11 needed from the final over, Naseem Shah showed his batting skills, smashing Fazalhaq Farooqi for back-to-back sixes to seal the match in Pakistan’s favour.

Earlier, Pakistan dished out a fine bowling display to restrict Afghanistan to a below-par 129 for six. Afghanistan made a positive start after being sent in to bat with Hazratullah Zazai (21) and wicket-keeper Rahmanullah Gurbaz (17) sharing 36 runs for the opening wicket.

After a sedate opening over, Afghanistan broke free in the next over with Gurbaz hitting Mohammad Hasnain for back-to-back sixes to pick up 16 runs.

Zazai matched his partner by finding the boundary twice in the next over before Haris Rauf cleaned up Gurbaz in the fifth delivery of the fourth over.

Despite the fall of wicket, Zazai continued his attacking vein, hitting Hasnain for a boundary before perishing in the fifth delivery after the bowler castled him with a deceptive slower delivery.

With runs hard to come by, Janat tried to force the pace of the innings but in vain as he was holed out by Fakhar Zaman off Mohammad Nawaz in the 12th over while trying for an extravagant slog sweep.

Najibullah Zadran (10) started his knock in a rollicking fashion, whipping Shadab Khan over deep midwicket before the spinner had the last laugh.

It became bad to worse for Afghanistan when Mohammad Nabi departed in the next ball with Naseem Shah disturbing his timbers for a first-ball duck.

Ibrahim Zadran, however, continued to play his attacking shots and struck Shadab over the cover fence for a maximum in the next over.

Zadran’s knock was cut short in the next over by Rauf (2/26) when the batter thick edged a delivery behind stumps to Mohammad Rizwan.

In the last over, Rashid Khan (18 not out) used his long handle to great effect and smashed Rauf for a six and a four to pick up 10 runs and take Afghanistan close to the 130-run mark.