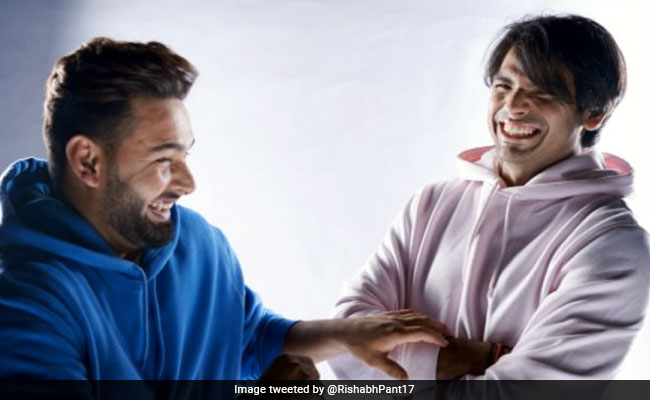 Tokyo 2020 gold medal winner Neeraj Chopra shared some candid pictures on social media featuring Team India wicketkeeper-batter Rishabh Pant. The post sent the fans into a frenzy as both were seen enjoying a good laugh during a photoshoot. Neeraj posted on Twitter with a caption that read: “Always easier when you have a friend with you to face the cameras! Great fun doing this with Rishabh bhai.” Rishabh was quick to reply to Neeraj’s post and wished him “good luck” for his training. “You’re already a pro, Neeraj! Good luck with training and hope to catch up soon,” replied Rishabh.

You’re already a pro, Neeraj! Good luck with training and hope to catch up soon ???? https://t.co/Mf56CKw03m

Fans also reacted to the pictures and admired both the sports personalities in one frame. Here’s what they wrote:

“You both are just 24 but already achieved a lot of things.”

Neeraj became a household name after he ended India’s wait for an individual Olympic gold medal in athletics by winning the top prize in the men’s javelin event at the Tokyo Olympics last year.

As far as Rishabh is concerned, the wicketkeeper was recently involved in the South Tour. However, the tour didn’t bring much success to Team India, who went down 2-1 in the Test series and were whitewashed 3-0 in the ODI series.

The Indian cricket team is scheduled to face West Indies in a three-match ODI and T20I series beginning February 6.