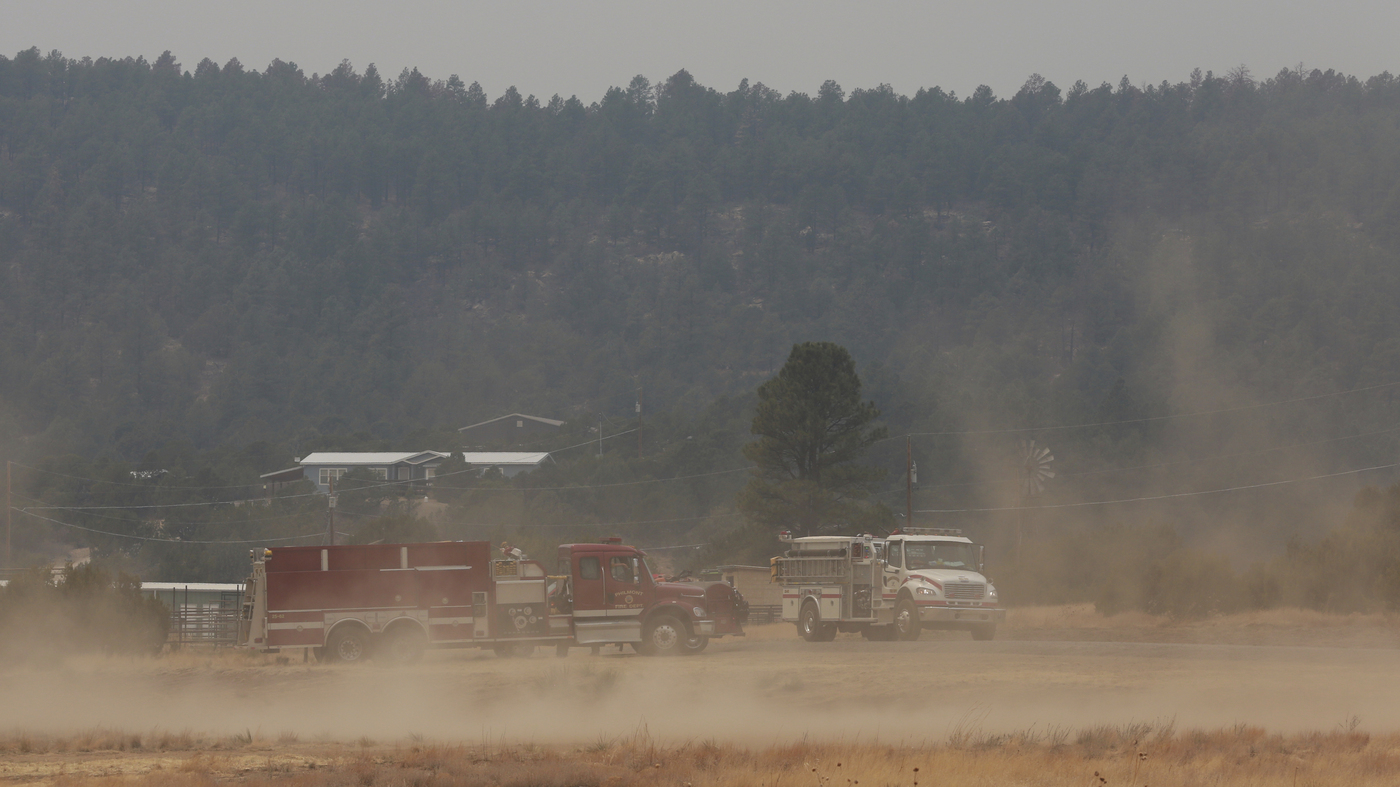 Wind kicks up dust at the fairgrounds as firefighters meet and confer about the wildfire raging on the other side of the hill behind them just outside of Las Vegas, N.M., on Saturday, May 7, 2022.

Wind kicks up dust at the fairgrounds as firefighters meet and confer about the wildfire raging on the other side of the hill behind them just outside of Las Vegas, N.M., on Saturday, May 7, 2022.

LAS VEGAS, N.M. — With the worst of the thick wildfire smoke having blown out of town, residents of this small northern New Mexico city tried to recapture a sense of normalcy Saturday as their rural neighbors hunkered down amid predictions of extreme fire conditions.

Shops and restaurants reopened, the historic center was no longer just populated by firefighters, but there was a widely felt sense of anxiety, loss, and wariness of what lay ahead.

“It’s literally like living under a dark cloud,” said Liz Birmingham, whose daughter had persistent headaches from the smoke. “It’s unnerving.”

While the city for now seemed spared of danger, rural areas were still threatened as the fire was driven by winds so fierce all firefighting aircraft had to be grounded. And the worst could be yet to come.

A combination of strong winds, high temperatures and low humidity were forecast by the National Weather Service to create an “exceptionally dangerous and likely historic stretch of critical to extreme fire weather conditions” for several days.

Some 1,400 firefighters worked feverishly to contain the largest fire burning in the U.S. The blaze, now more than a month old, has blackened more than 269 square miles (696 square kilometers) — an area larger than the city of Chicago.

Part of the fire was started by Forest Service workers who lost control of a prescribed burn meant to reduce fire risk. State leaders have called on the federal government for accountability, including reparations.

Nationwide, close to 2,000 square miles (5,180 square kilometers) have burned so far this year, with 2018 being the last time this much fire had been reported at this point, according to the National Interagency Fire Center. And predictions for the rest of the spring do not bode well for the West, where long-term drought and warmer temperatures brought on by climate change have combined to worsen the threat of wildfire.

Thousands of residents have evacuated due to flames that have charred large swaths of the Sangre de Cristo Mountains in northeastern New Mexico.

Firefighters, who typically rely on calmer winders and lower temperatures to make progress in the evening, have been hindered by unexpectedly strong winds at night.

The threat to Las Vegas, a city of 13,000, was reduced after vegetation was cleared to create containment lines. Local officials on Saturday allowed residents of several areas on the city’s northwestern outskirts to return to their homes, Berlin said.

The city looked like a ghost town earlier in the week, with businesses shuttered, schools closed and the tourist district empty but for resting firefighters. By Saturday, it was in a partial state of recovery.

National Guard troops carried cases of water, people lined up to sign up for relief from the Federal Emergency Management Agency and U.S. Sen. Martin Heinrich, D-N.M., met with local officials and toured the shelter housing some of the displaced.

“We don’t know if our houses are getting burned, or if it’s gonna stop,” said Domingo Martinez, an evacuee from rural Manuelitas northwest of Las Vegas. “I hope it dies down so we can go home.”

Martinez, who is staying with his son on the east side of town, visited an old friend and neighbor who had been living in the middle school shelter for 15 days.

Outside the school, Martinez got a free haircut from Jessica Aragón, a local hairdresser who volunteered her time.

“I love that everyone is coming together,” Aragón said. “I think a smile is worth a thousand words.”

Birmingham was one of four dog owners leading German shepherds and a black Labrador through an obedience course in a park next to a library. All had been touched in some way by the fire.

One was a construction worker whose work sites had all been reduced to ash.

Fire officials warned Las Vegas residents that they should still be ready to leave and not to let their guards down because winds will pick up. High winds and increasing smoke will also make it difficult — or impossible — to fly water-dropping choppers and planes dumping fire retardant.

On a mountain ridgeline outside of town, a sloppy line of red retardant could be seen on the trees. Residents were praying that the line and the wall of rock would hold.